"It could've been worse. The terrorists have guns and explosives, but at least they don't have vacuum cleaners." 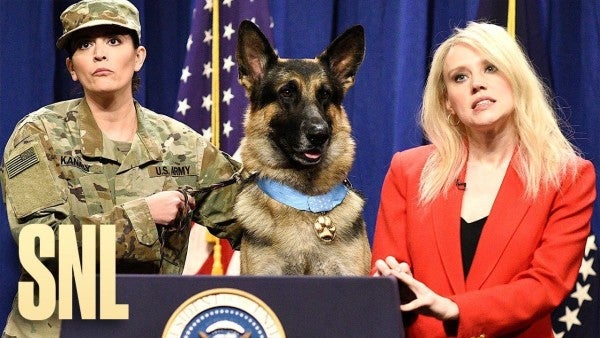 A pooch resembling the hero dog who took part in the raid that brought down the leader of ISIS last month was asked some ruff questions in a sketch on “Saturday Night Live.”

The segment, which aired during Saturday's episode, featured a pooch that looks like Conan, along with a translator (Cecily Strong) who interpreted what all of the dog's growls and gestures meant during a mock press conference following the death of Abu Bakr al-Baghdadi.

After being introduced by Kate McKinnon's Kellyanne Conway, Conan and the translator took questions from the media.

“It could've been worse. The terrorists have guns and explosives, but at least they don't have vacuum cleaners,” Conan answered through the interpreter after a reporter asked if the dog was scared during the raid.

Parodying some of the scandals that have swirled around other public figures in the past, the reporters then asked about fictional stories involving Conan's controversial Twitter history and a video showing the dog “barking at a black mailman.”

“I swear it wasn't about race because I don't see color,” Strong said on behalf of the dog. “Like, literally, I'm color blind.”

Baghdadi killed himself when he set off a suicide vest during a raid by American military forces late last month. Conan, who was slightly wounded in the raid, was declared an “American Hero” in a tweet by President Trump that also featured a photo edited to show the commander-in-chief placing a medal around the dog's neck.