A high-ranking officer who once led the training battalion at the center of the Marine Corps Recruit Depot Parris Island... 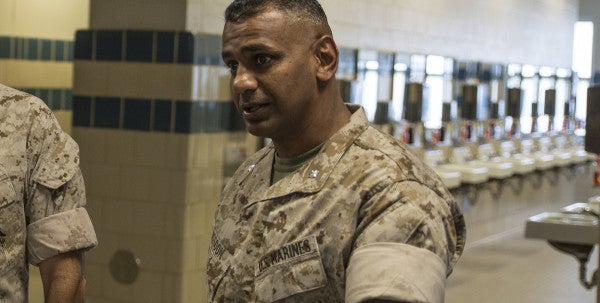 A high-ranking officer who once led the training battalion at the center of the Marine Corps Recruit Depot Parris Island hazing scandal will face trial in the military’s highest court.

Lt. Col. Joshua Kissoon, former commander of Parris Island’s 3rd Recruit Training Battalion, is accused of several violations of the Uniform Code of Military Justice, including failing to obey an order; making a false statement; and conduct unbecoming an officer. He will be arraigned at a to-be-determined date at Marine Corps Base Quantico before his case is sent to a general court-martial, according to a Marine Corps news release sent late Thursday night.

He is the highest-ranking officer to be referred to a court-martial in the wake of the scandal.

“It’s rare,” said Capt. Joshua Pena, spokesperson for Marine Corps Training and Education Command, the division that’s handling the case. “It’s not common for a battalion commander to go to a court-martial to face charges. And the command is taking it extremely serious because of the amount of responsibility that he held.”

Felix, himself facing general court-martial, is alleged to have stuffed a recruit — Ameer Bourmeche, per a recent New York Times Magazine story — into a commercial clothes dryer, turned it on and interrogated the trainee about his faith and loyalty on the night of July 14, 2015. The next night, the Times said, Felix allegedly made Bourmeche simulate a beheading on a fellow recruit.

Felix reportedly called Bourmeche a “terrorist,” and, in the spring of 2016, allegedly called Siddiqui one, too. Both recruits were Muslim.

Siddiqui, 20, of Taylor, Mich., died after a nearly 40-foot fall from the third floor of his barracks. He was reportedly sick on the day of his death and was trying to request permission to go to sickbay. Witnesses said Felix made him perform a series of “get-backs” — sprints — across the squadbay. At one point Siddiqui collapsed. Felix allegedly slapped him multiple times in the face. Witnesses reported Siddiqui jumped up, ran out the back door of the squadbay and vaulted over the railing near the staircase.

Felix should not have been supervising recruits at the time, according to the Corps.

Felix was one of 20 Marines, most of them drill instructors, who found themselves under scrutiny in the wake of Siddiqui’s death, when a hazing and recruit abuse probe found widespread misconduct and systemic leadership and supervision failures.

To date, seven Marines, including Kissoon, have been referred to courts-martial. One was acquitted. One pleaded guilty at a low-level proceeding. Another ended up avoiding court-martial with a pre-trial agreement.

Staff Sgt. Antonio Burke is still scheduled to face court-martial this summer for his alleged involvement in “The Dungeon” — a dusty, abandoned building where recruits were taken and forced to exercise — and for reportedly making a recruit change his Facebook password so Burke could contact the trainee’s sister to ask her on a date.

And Felix and Michael Eldridge await their general courts-martial — Eldridge for his alleged role in the dryer incident; Felix for his alleged involvement in that incident and Siddiqui’s death.

Other Marines have received administrative punishments — including reliefs of command — which the Corps said it will not specify.

Two other Marines “have been found to have no substantiated allegations against them,” the Corps said in June. That same month, Military.com reported that two Parris Island drill instructors were back at work after being cleared of wrongdoing.

In a recent Article 32 hearing for Kissoon — a prerequisite for sending a case to a general court-martial — his former boss, Col. Paul Cucinotta, testified that he was unaware that Felix was allowed to resume training recruits in spring 2016, according to Military.com. Cucinotta said that when he later asked Kissoon about it, Kissoon told him that he would have tried to talk him into letting Felix come back.

Military.com reported Cucinotta made a deal with prosecutors and was granted immunity to testify against Kissoon.

“That kind of shows the gloves are off,” Beaufort-area attorney and former Marine Corps prosecutor and defense counselor Jeff Stephens said of Vokey’s involvement in the case. “He’s a pretty big gun to bring in, and I think it shows the Marine Corps that (Kissoon’s) ready for a fight.”

Vokey, reached by phone Friday afternoon, said he took Kissoon’s case because his client was a stellar Marine with 27 years of service.

When asked if he wanted to take Kissoon’s case to a court-martial, Vokey said, “There have been no pre-trial deals. None requested, none accepted. Nothing.”

And while there’s still time for a deal before his client’s case goes to trial, Vokey reiterated that he’d not requested any deals. When asked if he’d consider one if it was offered by prosecutors, he said, “I can’t speculate on that.”

He said the deals offered to several other Marines to testify against his client were “incredibly rare.” Referring to Cucinotta, Vokey said: “To give a regimental commander a full grant of immunity is almost unheard of.”

Referring to the pre-trial wheeling and dealing, Vokey said it indicated that “they’ve wanted to nail Kissoon from the very beginning, before they know the full facts of everything.”

Cucinotta, like Kissoon, was relieved of command in the wake of the scandal.

Kissoon’s relief was announced March 31, 2016, but the Corps said the decision to relieve him was made two weeks earlier — the day before Siddiqui’s death. The Corps said that decision was not related to the Siddiqui incident, but rather stemmed from the findings of an inquiry by the Inspector General of the Marine Corps that caused Cucinotta to lose “trust and confidence” in Kisoon’s leadership.

Cucinotta was relieved on June 6, 2016. At a change of command ceremony four days later, outgoing Parris Island commander Brig. Gen. Terry V. Williams said of Cucinotta, “And I do want to mention Paul Cucinotta, who did a lot for the (Recruit Training Regiment). And his service was noted. You’re a professional and a real honorable man.”

The New York Times Magazine piece shed light on the tone of Kissoon’s command of 3rd Battalion. He was reported to have, at first, tried to quash drill instructor misconduct. But his outlook changed after he received the results of command climate survey in April 2015 — he began to handle some cases differently, more leniently.

While 3rd Battalion has been the focal point of hazing and abuse inquiries, a recent investigation by The Island Packet and Beaufort Gazette discovered 24 inquiries of such misconduct at Parris Island since January 2014. Those inquiries occurred in each of the depot’s four training battalions. Half of them were substantiated.

“It is a very big case,” Vokey said of Kissoon’s impending trial.

“Anytime they try to find a senior officer liable for others’ actions, it’s definitely a big case.”