Vandals tried to burn a statue of a Confederate general. They got the founder of the US Army Airborne instead

A marble statue memorializing the founder of the U.S. Army Airborne was set on fire Thursday in North Carolina, and museum officials believe it happened because vandals confused it for a Confederate memorial 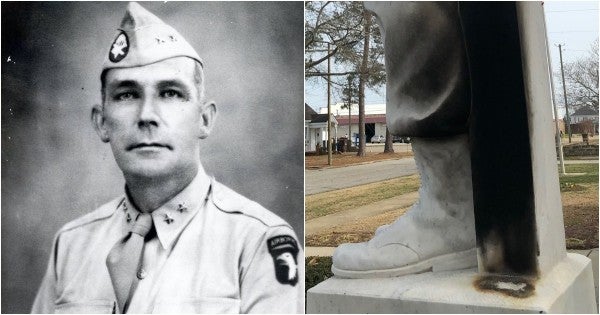 A marble statue memorializing the founder of the U.S. Army Airborne was set on fire Thursday in North Carolina, and museum officials believe it happened because vandals confused it for a Confederate memorial, according to the Dunn Daily Record and other media outlets.

Still, officials at the William C. Lee Airborne Museum in Dunn believe someone mistook the two for the same person, according to TV station WNCN.

“This is not a Civil War museum,” museum curator Mark Johnson told WNCN. “This is General William C. Lee from United States Army Airborne from World War II, so I was hurt and surprised that somebody would actually do this.”

The museum posted a terse note about the vandalism on Facebook page Feb. 15, referring to the culprit as “some jerk punk.”

“Someone poured a flammable liquid over the white marble statue of Lee and set it on fire. The local fire department put out the flames, but the damage is done,” said the post.

“It scorched the statue mostly on the left side. You can see the burn marks in the marble where the jerk placed the remainder of the fuel container on the platform.”

Johnson told the Dunn Daily Record he believes the fire was set by someone trying to make a “statement about racism, bigotry and slavery.”

Security footage is being reviewed and work to clean and repair the statue will begin soon, said the museum's Facebook post.

The World War II museum is dedicated to the creation of airborne warfare, which started at Fort Bragg under William C. Lee's command. The museum is run by a commission and is not state owned.

Hundreds of comments expressing anger have been posted on the museum's Facebook page, including many who took the vandalism as an insult to patriotism and the nation's military.

“My husband was an Airborne soldier at Ft. Bragg NC for a good many years,” posted Molly C McGill. “I hope they find who did this and make them pay for their stupidity.”

“I am an 81-year-old 82nd Airborne trooper and I would enjoy kicking the hell out of this trash,” wrote Gary G. Hostetter Sr. on Facebook.

“When caught, don't take them to jail. Just drop their sorry butts off at a 82nd Airborne barracks (at) Fort Bragg,” posted Samuel Mains. “I guarantee they will get their due justice.”'