The Army, which has jurisdiction over Arlington National Cemetery, confirmed that the service is working with the Defense Department "on guidance for display of divisive symbols," including the Confederate Memorial 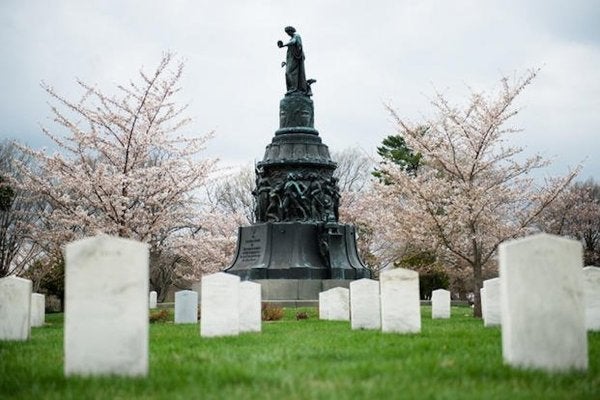 The frieze on the Confederate Memorial in Section 16 of Arlington National Cemetery depicts a “Mammy” cradling the infant of a rebel soldier and a slave following his master off to war.

The inscription in Latin on the 32-foot high monument, one of the tallest on the cemetery's hallowed grounds, also pays homage to the “Lost Cause” of secession from the United States.

Since it was dedicated in 1914 by President Woodrow Wilson, the monument's presence on the grounds of what had been the estate of Confederate Gen. Robert E. Lee and Mary Custis Lee has been the target of periodic calls for its removal, and now it could be again.

In a statement Tuesday, the Army, which has jurisdiction over Arlington National Cemetery (ANC), confirmed that the service is working with the Defense Department “on guidance for display of divisive symbols. Any review would include this memorial.”

The Army's action, first reported by The Washington Post, made the monument in Arlington part of the national debate on Confederate symbols, statues and military base names that was fueled by the May 25 killing in Minneapolis of George Floyd in police custody and the following mostly peaceful protests for racial justice.

In addition, a pair of House Appropriations Committee bills would block funding for military construction projects at bases named after Confederate leaders unless a renaming process had begun, and would also provide $1 million in funding for the Army to rename the bases.

Sen. Kirsten Gillibrand, D-New York, with the backing of 35 other Democratic senators, has also put forward a stand-alone bill called the “The Removing Confederate Names and Symbols from Our Military Act.”

In a June 30 Twitter post, President Donald Trump threatened to veto the entire NDAA if provisions “which will lead to the renaming (plus other bad things!) of Fort Bragg, Fort Robert E. Lee, and many other Military Bases from which we won Two World Wars, is in the Bill!”

Any steps to remove or replace the Confederate Memorial in Arlington would inevitably spark controversy and resurface the scars of history. Even the dead at Arlington were segregated until 1948, when President Harry Truman ordered the desegregation of the military.

The monument, topped by the figure of a woman representing “The South” and extending a laurel wreath from her left hand toward the south, is ringed by the gravestones of more than 400 Confederate troops arranged in concentric circles.

The headstones are distinct, coming to a point at the top as opposed to the rounded headstones in the rest of the cemetery.

After the Civil War, Arlington initially barred Confederate soldiers from burial there, but the ban eventually was lifted.

A history of the monument posted on the cemetery's website notes that the Confederate Memorial “embodies the complex and contested legacy of the Civil War at Arlington National Cemetery, and in American culture generally.”

In 1900, in the spirit of reconciliation, Congress authorized Confederate remains to be reinterred at ANC. Two years earlier, President William McKinley had kicked off his “Peace Jubilee” tour at the end of the Spanish-American war with a speech in Atlanta.

“In the spirit of fraternity, we should share with you in the care of the graves of Confederate soldiers,” he said. “Sectional feeling no longer holds back the love we feel for each other. The old flag again waves over us in peace with new glories.”

In 2009, President Barack Obama altered the tradition. He sent two wreaths — one to the Confederate Memorial, the other to Washington, D.C.'s African American Civil War Memorial, a historical description on the Arlington website said.

In 1906, President William Howard Taft gave approval to the United Daughters of the Confederacy to begin raising funds for the erection of a monument in the Confederate section.

Moses Jacob Ezekiel, a sculptor and a Confederate veteran, was chosen as the designer.

“The elaborately designed monument offers a nostalgic, mythologized vision of the Confederacy, including highly sanitized depictions of slavery,” the ANC website states.

In 2017, descendants of Moses Jacob Ezekiel called for the removal of the Confederate Memorial from the cemetery.

In a letter to The Washington Post, they said the monument “glorifies the fight to own human beings and, in its portrayal of African Americans, implies their collusion.”

“As proud as our family may be of Moses' artistic prowess, we — some twenty Ezekiels — say remove that statue. Take it out of its honored spot in Arlington National Cemetery and put it in a museum that makes clear its oppressive history,” the letter said.