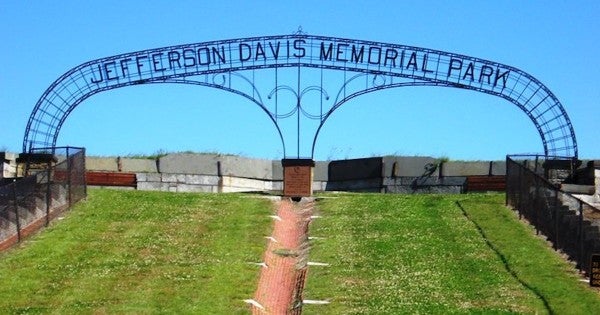 The Fort Monroe Authority on Friday removed the letters that spelled “Jefferson Davis Memorial Park” from an iron archway that honored the one-time Confederate president imprisoned at the former Army post.

The removal came after a lengthy review process to determine the arch's place at Fort Monroe following Gov. Ralph Northam's call in April to have the entire 50-foot structure dismantled.

Fort Monroe's preservation officer David Stroud began reviewing that feasibility with the Department of Historic Resources to determine if it would adversely effect the property's historic status, and ultimately came up with this alternative.

On Thursday, FMA Executive Director Glenn Oder, DHR and the governor signed an agreement recommending to keep up the arch, remove the letters and add interpretive signage near the arch's base at the Bernard and Ruckman Road intersection.

“The state preservation officer and the governor agreed to a 'mitigation plan, which is essentially a compromise,' ” Oder said.

Standing on ladders, crews on an overcast morning cut the tack welding that kept the letters adhered to the arch.

They will be stored in the Casemate Museum and curated as a part of the interpretation of the Jefferson Davis story, Oder said. Davis, a former U.S. Senator and Secretary of War, was imprisoned for treason at the fort following the Civil War.

“As a former board member of the Fort Monroe Authority and later vice chair, the governor has long been troubled by the Jefferson Davis arch and memorial park,” Northam's spokeswoman Alena Yarmosky wrote in a statement. “(Northam) requested the arch to be taken down and the … park be renamed, as a memorial glorifying the President of the Confederacy has no place at the site of the first arrival of enslaved people.”

At the end of August, Fort Monroe will host commemoration events to mark the 400th anniversary of the arrival of the first Africans to English North America.

Christine Gergely, a member of the United Daughters of the Confederacy, which paid the U.S. Army $10,000 to build the arch in 1956, looked on Friday as crews worked.

Gergely said the arch, built on the south bastion, was meant to commemorate the 1961 centennial of the Civil War.

She said the UDC has worked with other historic groups to help preserve their heritage and felt her group deserved the same treatment.

“We should have been formally informed,” Gergely said. “I think this is very unfair that we weren't told this was happening today.”

Bill Wiggins, a member of the Contraband Historical Society, who felt the arch was offensive, also came to witness the action. Wiggins said regardless of if the letters are gone, it still preserves history and can lead to a greater dialogue.

“I'm not looking at this as a victory or something to celebrate,” Wiggins said. “(But) for a whole race of people to have to pass by an individual who would have continued to enslave African people, in a public place, is unacceptable.”

Critics have questioned the presence of the arch and its message, given the fort's nickname “Freedom's Fortress” and its position hosting the 400th anniversary events.

The arch and accompanying memorial park are listed as contributing landscapes in the original governing documents, crafted after the 2005 Base Realignment and Closure (BRAC) decision.

The governing documents list several guidelines for the future stewardship of the 565-acre fortress property, which was designated a national historic landmark.

During the review process, the Fort Monroe Authority shared its research on the arch and sought input from stakeholders, including the National Park Service and other interested nonprofit groups.

The public also was given an opportunity for about a month to submit comments online, which captured more than 1,000 responses.

The authority also hosted a public comment meeting Monday, even as officials announced they would be taking the letters off the arch.

Friday's activity drew a few spectators who calmly looked on and discussed the issue.

Bob Shirley, a Virginia Beach resident and member of the Sons of Confederate Veterans, said the action is Northam's attempt at saving face since February, when a blackface photo was found on his page in his medical school yearbook.

Others in favor of the arch staying in tact said the Fort Monroe Authority was misleading Monday. Officials presented that the letters would be removed, but did not say when it would happen.

“At least be honest. You don't say you're going to do something when you've already done it. We were had Monday,” said B. Frank Earnest Sr., a member of the Sons of Confederate Veterans, Norfolk County Grays/Camp #1549. “You don't do away with one person's heritage to appease another's.”

Larry Hicks, who served in the Army and a Fort Monroe resident for seven years, didn't see the point in removing the letters off an obscure structure.

“We are worried about signs?” Hicks said, who works with at-risk children in Norfolk. “You have people being mistreated. We have drugs and we have community concerns.”

Rick Alexander of Norfolk happened to walk by the arch with his wife Rhiannon and took a photo.

“It's just sad,” Alexander said when he learned what was happening. “If you remove history, you're destined to repeat it. Children need to learn (from) it.”

Historian John V. Quarstein also disagreed with tampering with the arch, but he is grateful there will be some explanation.

“I think it's part of the historic fabric of Fort Monroe — his imprisonment. That is a major story of Fort Monroe,” Quarstein said. “I don't think you should tear down monuments. We should build new moments to honor other people. We could use something for Harriet Tubman. You need to balance good history with bad history. I don't think we should be selective in history. We should be inclusive.”