The California National Guard told the state’s members of Congress two years ago that the Pentagon was trying to claw... 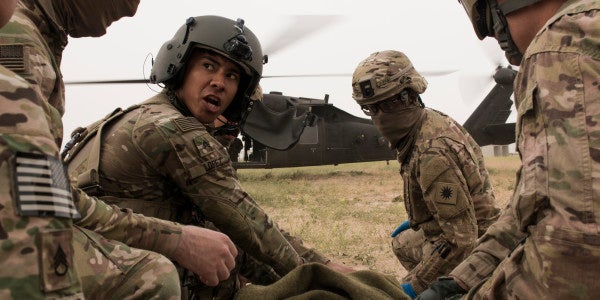 The California National Guard told the state’s members of Congress two years ago that the Pentagon was trying to claw back re-enlistment bonuses from thousands of soldiers, and even offered a proposal to mitigate the problem, but Congress took no action, according to a senior National Guard official.

The official added that improper bonuses had been paid to National Guard members in every state, raising the possibility that many more soldiers may owe large debts to the Pentagon.

“This is a national issue and affects all states,” Andreas Mueller, the chief of federal policy for the California Guard, wrote in an email to the state’s congressional delegation Monday. Attention had focused on California because it was “the only state that audited” bonus payments at the height of the wars in Iraq and Afghanistan, he added.

The Los Angeles Times/Tribune Washington Bureau reported Saturday that the Pentagon has been demanding repayment of enlistment bonuses — which often reached $15,000 or more — from thousands of California Guard soldiers, many of whom had served multiple combat tours in Iraq and Afghanistan. Audits completed last month concluded that 9,700 California Guard members were not entitled to the payments or that there had been errors in their paperwork.

“We know that the majority (of cases) is out of California. However, there may be other states involved,” said Laura Ochoa, a Pentagon spokeswoman. “We do not have a list of those states at this time.”

“The senior leadership of the department is looking very closely at this matter,” Ochoa said. “We take doing right by our service members very seriously.”

The possibility that more soldiers will have to repay large bonuses paid years ago, when the Pentagon relied heavily on the Guard to supply troops for two wars, may increase pressure on Congress to act.

In an interview, Mueller said a provision in a defense bill that has passed the House would have cured at least part of the problem by establishing a 10-year limit on how long the Pentagon could recover bonuses that had been paid improperly.

Final passage of that provision had been uncertain because of the money it would cost. Now, Congress may decide to go further.

On Monday, House Democratic leader Nancy Pelosi of California sent a letter to Speaker Paul D. Ryan, R-Wis., and Senate Majority Leader Mitch McConnell, R-Ky., saying that Congress should pass legislation to halt the Pentagon debt recovery “as soon as we gavel back into session” after the Nov. 8 election.

“These brave Californians were willing to give everything to serve our country, and they earned every penny and benefit given to them,” Pelosi said. “The overpayment of enlistment signing bonuses by the Department of Defense should not be the responsibility of our service members or veterans to pay back, years after the fact.”

Democratic Sens. Dianne Feinstein and Barbara Boxer of California sent a letter to Defense Secretary Ashton Carter insisting that the Pentagon had the legal power to forgive the soldiers’ debts without action by Congress.

“These men and women voluntarily re-enlisted with the understanding that they would receive substantial bonuses,” the letter said. “The Department of Defense should use its existing authority … to waive the repayment of these enlistment bonuses” and “help those service members who have already fully or partially repaid these incentives.”

Both Hillary Clinton and Donald Trump also weighed in on the controversy.

Clinton, in a statement, said she was “appalled” by the news that the Pentagon was trying to take back the bonuses and said Congress should “swiftly pass legislation to right this wrong.”

“These troops deserve our support and our deepest gratitude; they served admirably and upheld their part of the bargain. It is unacceptable to now subject them and their families to undue financial burdens thanks to mismanagement from the California National Guard and rigid bureaucracy on the part of the Pentagon,” Clinton said.

Trump, at a rally in Florida, called the case another example of wrongdoing in a “corrupt” political system.

“This can only happen with these incompetent people we have,” he said. “No common sense. They’re incompetent.”

California Guard officials say they do not have the legal power to waive repayment. Soldiers can appeal to the National Guard Bureau, the Pentagon agency that oversees state Guard organizations, and to an Army Board for Correction of Military Records. In some cases, they say, those entities can waive some or all of a soldier’s debts.

“Unfortunately, the CalGuard has no ability to relieve debt, only the Army or Congress can short-circuit this process,” Mueller said in the email to lawmakers.

The Pentagon appeals process was a “bottleneck” that “often takes more than a year” and “obviously creates extreme frustrations with the soldiers and their families,” he added.

Mueller said the California Guard had previously “recommended that Congress speed up this Army process” and had sent draft legislation to do so to each California congressional office in 2014. In the interview, he said Congress had not acted at the time because of the cost.