The Congressional Research Service has prepared a briefing for Congress that reveals the seven U.S. military options for dealing with the... 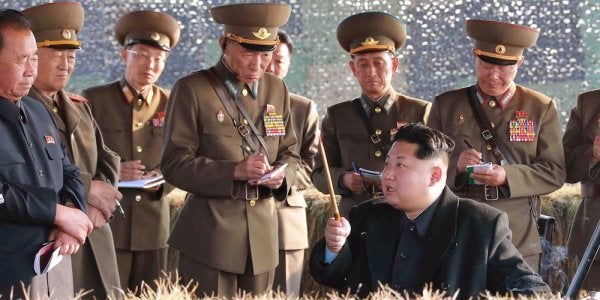 The Congressional Research Service has prepared a briefing for Congress that reveals the seven U.S. military options for dealing with the growing threat from North Korea.

The options, often hinted at by President Donald Trump and members of his cabinet, represent the full range of U..S military might and strategy, but sometimes in unexpected ways.

For example, not every option has to do with the use of force. In some cases, the U.S. may just continue business as usual. In other cases, the military may withdraw completely from South Korea.

In the slides below, you can see the same information that Congress has on the U.S.'s military options in North Korea.

Simply put, the U.S. military could just continue regular activities and military drills while the Department of State works on sanctions and diplomatic solutions to the problem.

If this sounds familiar, it's because former President Barack Obama spent eight years doing it to limited effect.

On the plus side, this course of action presents a lower risk of elevating the tense situation into a full-blown crisis or warfare. Those against this policy of “strategic patience,” as the Obama administration dubbed it, point out that it has failed for years to stop North Korea from gaining a nuclear weapon or creating long-range missiles.

So far, Trump has stuck to the basic principals of strategic patience but supplemented it with more deployments of aircraft carriers and sometimes frightening threats to “totally destroy” the country with “fire and fury.”

This option takes the status quo and jacks it up with the U.S.'s scariest, most capable platforms coming to the region and closely monitoring North Korea to make it feel its nuclear program is unwise.

U.S. stealth jets and bombers, aircraft carriers, nuclear submarines, guided-missile destroyers, and even tactical nuclear weapons could deploy to South Korea and Japan on a more permanent basis to step up the U.S. presence in the area.

Meanwhile, an increased cyber and naval presence would seek to interdict any shipments to North Korea that could further Pyongyang's weapons program.

Skeptics of this approach point out that North Korea hates U.S. military deployments to the peninsula and could easily see such a move as further justification to continue its weapons program at any cost.

Furthermore, the U.S. can't simply place these assets in the region — it needs to credibly threaten using them. What happens if a North Korean ship opens fire on Navy sailors trying to board and inspect its cargo?

This approach disregards the long-stated U.S. goal of denuclearizing North Korea and goes straight for a more realistic goal of freezing its nuclear-missile program.

Basically, North Korea has to keep testing its missiles to achieve a credible nuclear threat to the U.S., but to do so it has to test missiles that fly beyond its borders.

If the U.S. and allies shot down North Korea's test fires, it would deny Pyongyang the testing data it needs to have confidence in its fleet.

But this would require U.S. ballistic-missile-defense assets, like its Navy destroyers, to constantly commit to the region, limiting resources available elsewhere.

Additionally, North Korea could still test shorter-range missiles that put U.S. forces in the region at risk, and it's unknown how Pyongyang would respond to having its missiles shot down.

With limited airstrikes and likely some Tomahawk missile launches from the Navy, the U.S. military would look to destroy in one quick pass every single known missile launchpad and ICBM manufacturing site.

But the U.S. doesn't know the full extent of North Korea's missile-producing infrastructure, and could easily leave behind some secret or underground sites. And while most North Korean missiles are fired from fixed sites, North Korea has developed solid-fueled missiles that can launch from anywhere at virtually any time.

While this strike could conceivably remove the threat to the U.S. from North Korean ICBMs, Pyongyang may very well see the attack as a larger-scale decapitation attack against the Kim regime.

Therefore, North Korea may unleash its full, massive artillery force against South Korea and the U.S. forces there. It may fire nuclear missiles at Japan and South Korea. Experts assess that an all-out war could cost 30,000 to 300,000 lives a day, with many of those coming from the civilian populations of the U.S.'s allies in Asia.

This option stages an even bigger military campaign targeting every known nuclear and missile site across North Korea. Instead of just airstrikes and cruise-missile launches, this type of attack may necessitate U.S. special operations forces flooding over the border to neutralize key North Korean sites.

Because the U.S. does not know the location of every North Korean nuclear and missile site, intense surveillance and guess-and-check work would follow the initial salvo.

This option only increases the already dire risk to the U.S.'s allies.

Decapitation of the Kim regime

Although the U.S. military, Secretary of State Tillerson, and Secretary of Defense Jim Mattis all say unequivocally that the US does not want or train for regime-change missions in North Korea, the president and the military have to do what's best for the country at any cost.

If the U.S. assesses that the Kim regime has bad intentions for the people of the U.S., regime change by military force could come into play.

But the U.S. couldn't simply kill Kim Jong Un and have the other 25 million North Koreans surrender. North Korea still technically exists under the “forever leader” of Kim Il Sung, who has been dead for decades. Rank-and-file North Koreans inculcated with propaganda would fight on, perhaps even more savagely, after Kim died.

Therefore the military would have to target “not only nuclear infrastructure but command and control facilities, key leaders, artillery and missile units, chemical and biological weapons facilities, airfields, ports, and other targets deemed critical to regime survival,” according to the report for Congress.

“This operation would be tantamount to pursuing full-scale war on the Korean Peninsula, and risk conflict elsewhere in the region,” the report concludes.

The conflict would have every opportunity to be drawn out and grow every bit as bloody as the Vietnam War or the first Korean conflict, and for that reason it remains unlikely.

This option represents the polar opposite of all other military possibilities by fundamentally reordering the US's considerations on North Korea.

Essentially, some believe North Korea pursues nuclear weapons because the U.S. has troops in South Korea and Japan. If the U.S. withdrew those troops, Kim Jong Un wouldn't feel as pressured and China or the international community could more easily sway him to denuclearize.

But this idea speculates heavily on Kim's response to a weakened South Korea. Nothing guarantees that Kim would negotiate after gaining the upper hand on South Korea. Additionally, it argues that the US should end its legal troop deployments to Japan and South Korea in hopes that North Korea would end its illegal development of nuclear weapons, which sounds a lot like blackmail.

Additionally, North Korea has long stated one of its goals as reuniting the Korean Peninsula under the Kim dynasty, and if the US ceded to Pyongyang, it just may feel emboldened to do so.

The North Korean Nuclear Challenge: Military Options and Issues for Congress by Jared Keller on Scribd

None of the military options provided to Congress offers a perfect solution, and many offer catastrophic solutions.

In that respect, while the U.S. and allied militaries could certainly defeat North Korea and crush its nuclear program, it would cost potentially hundreds of thousands of lives and open the world to the possibility of nuclear warfare in the 21st century.