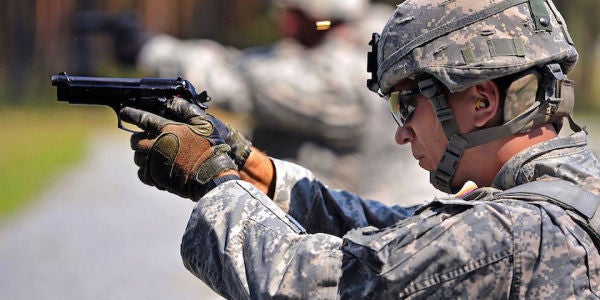 The Army’s troubled program to buy a new standard-issue handgun for soldiers was the subject of renewed debate on Capitol Hill.

At a time when Russia is upgrading its service rifle, “we continue to modify our M4s many of our troops still carry M16s, the Army can’t even figure out how to replace the M9 pistol, first issued in 1982,” Ernst said.

The senator, a frequent critic of the program who in 2015 retired as a lieutenant colonel in the Iowa Army National Guard, said she and others would joke while in the military that “sometimes the most efficient use of an M9 is to simply throw it at your adversary.”

Ernst blasted the Modular Handgun Program’s many requirements. “Take a look at their 350-page micromanaging requirements document if you want to know why it’s taking so long to get this accomplished,” she said.

She also mocked the stopping power of the 5.56mm rifle round. “Our military currently shoots a bullet that, as you know, is illegal for shooting small deer in nearly all states due to its lack of killing power,” she said.

Tillis went even further by showing up to the hearing with the pistol program’s full several hundred pages of requirements documents wrapped in red ribbon. “This is a great testament to what’s wrong with defense acquisition,” he said, slapping the three-inch-tall stack of paperwork.

Coincidentally, Army Chief of Staff Gen. Mark Milley was asked about the program earlier in the day at a breakfast sponsored by the Association of the United States Army. Milley was tight-lipped about the effort but hinted the service is making progress.

Beretta, FN Herstal, Sig Sauer and Glock are reportedly still competing for the program after the Army dropped Smith & Wesson from the competition last year. We’re hoping these gunmakers will help shed more light on the status of the program next week at SHOT Show in Las Vegas.