“A badass airplane with a big gun on it.” That's how Republican Congresswoman Martha McSally described the A-10 Warthog to President Donald... 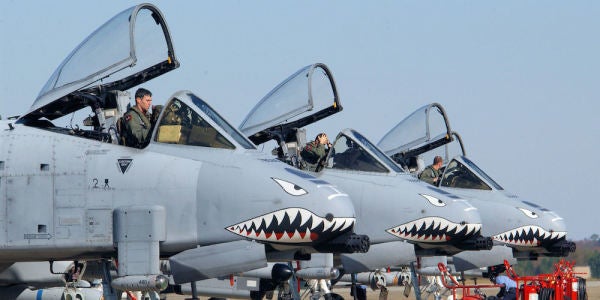 “A badass airplane with a big gun on it.”

That's how Republican Congresswoman Martha McSally described the A-10 Warthog to President Donald Trump, as she told the Center for Strategic and International Studies on Tuesday.

McSally, the first female fighter pilot and a veteran of Iraq and Afghanistan, told the crowd at the CSIS event about her experiences as an A-10 pilot laying down close air support for US troops during the 2000s.

“It's an amazing airplane to fly, but it's really cool to shoot the gun,” said McSally. “The folklore as A-10 pilots that we pass around is that we built the gun, and told the engineers 'figure out how to fly this gun.'”

Perhaps better known is the iconic “BRRRT” sound of the A-10's 30 mm, 1,174 round gun as heard from the ground, a sound that US infantrymen have come to equate with salvation and safety.

The GAU-8/A Avenger Gatling gun next to a VW Type 1. Removing an installed GAU-8 from an A-10 requires first installing a jack under the aircraft's tail to prevent it from tipping, as the cannon makes up most of the aircraft's forward weight.Photo via DoD

In practice, the A-10's gun is actually more precise than even the newest, most accurate GPS or laser-guided bombs, which can often cost up to a million dollars each.

“In Afghanistan … we used mostly the gun,” said McSally, “It's a very precise weapon and it allows for minimizing collateral damage and fratricide because the weapon's footprint is so tight. We can roll in and precisely go after the target while it keeps Americans safe.”