The Consequences Of Gender Segregation In Marine Boot Camp

The Marine Corps is asking tough questions of itself after the death of a Muslim recruit sparked an investigation that... 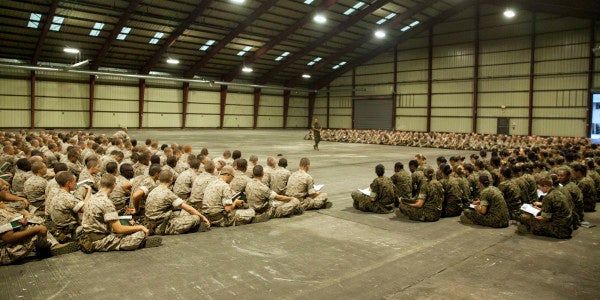 The Marine Corps is asking tough questions of itself after the death of a Muslim recruit sparked an investigation that could lead to administrative or legal action against up to 20 enlisted and officer personnel. But any dialogue about how recruits are made into Marines must also include a frank discussion about the segregated training of men and women in boot camp. Boot camp is meant to be a place of extremes, but it is also a place where negative attitudes about gender are imprinted on new recruits. The segregation of men and women at this most foundational level of indoctrination reinforces negative stereotypes about the abilities of women, breeds distrust, creates a negative impact on mental health for military women in and beyond the service.

The Marine Corps has long relied upon the unproven assumption that segregated recruit training is necessary to build confidence and self-esteem in female recruits. Proponents of segregation argue that it would be psychologically damaging for female recruits to have to compete alongside their male peers on the physical training field or the rifle range, lowering self-efficacy and hurting performance.

Unfortunately, this flawed argument assumes that female recruits are mentally and physically incapable of competition simply by virtue of their gender. Worse, it fails to account for decades of documented lower performance by female recruits (compared to male recruit averages) across all testable graduation event categories. Separation exists now, and so do gendered performance gaps. If segregation is indeed necessary to build women’s self-esteem, shouldn’t segregated training have paid off by now?

Stereotypes commonly accepted can actually lead to people meeting the lower bar set for them. This phenomenon is known as “stereotype threat.” Expectations are communicated verbally and nonverbally, and performance requirements are clear communications about the expectations the Marine Corps has of women. From the moment female recruits enter Marine boot camp, they are trained to a lower standard. This formalizes expectations that translate to stereotype threats: that they will run more slowly, have weaker upper body strength, and shoot a target with less accuracy than men.

As of June 2016, only one in seven female Marines seeking to enter combat-arms specialties passed the Corps’ rigorous, gender-neutral performance tests. But the small number of women who met the standards is due less to physiology than to recruiting and training methods. Without a concerted focus on recruiting mentally and physically strong, female high school athletes, and then rigorously preparing them to succeed at recruit training, the service will continue to enlist women who struggle to meet the physical standard for female enlistment, much less the gender-neutral ground combat job requirements.

Related: Recruiting More Women Into The Marine Corps Is Only Half The Solution »

The result is a vicious cycle whereby the female frailty myth is perpetuated: Because we assume we can’t recruit strong, tough women, we use lower standards and segregated training to ensure marginally qualified women can graduate. Opponents of tougher standards can then argue that increasing standards for women would result in even lower numbers of women capable of meeting enlistment standards. The problem there is a surprising one for military women — this psychosocial climate breeds ill health. Our bodies read exclusion and marginalization as physical threats. Low levels of social support and unit cohesion impact the physical and mental health of military women, driving up rates of stress injury and impairing physical performance.

It should come as no surprise that women in the military — particularly the Marine Corps — struggle to feel a sense of belonging and report low levels of unit cohesion. Since trust built around physical toughness is central to vertical and horizontal cohesion in the military, segregated training and the different evaluation standards for men and women in the Marines have significantly shaped perceptions of women’s physical abilities. Different performance and training standards, as well as segregation, establish women as marginal from the onset, ensuring that they will always be viewed as suspect in terms of capability.

Biologically, our bodies view lack of unit cohesion — or the absence of social support — as a physical threat. In fact, feeling disconnected from others is more dangerous to your health than smoking. Stress hormones surge, and when they’re elevated too long, men and women both begin to have difficulty communicating, displaying empathy, and engaging in high-level thinking. Physical performance also suffers.

Even if a female Marine is as physically capable as her male counterparts, she will not be inherently trusted unless they train together and she is subsequently held to identical performance standards.

Cohesion loss has serious, deleterious impact on female Marines both during active service and after transitioning to veteran status. Servicewomen are more than twice as likely to suffer from stress injuries and depression. The VA reported in 2015 that for women veterans ages 18 to 29, the risk of suicide is 12 times the rate of non-veteran women. And over all, the suicide rate of military women is six times higher than that of civilian women.

Poor health outcomes for military women are a great reason to address cohesion gaps. However, as we work to integrate the combat arms, issues stemming from segregated training and frailty myth perpetuation loom as complete deal-breakers. Segregation feeds the frailty myth and breeds distrust, which hampers cohesion for military women at every stage of their career and guarantees mission failure. The change need for structural change is not mere suggestion, but constitutes a performance mandate.

Kate Germano is the Chief Operating Officer of the Service Women’s Action Network. She retired earlier this year as a Lieutenant Colonel in the U.S. Marine Corps.