Vincent Grano suffered from nausea and cramps for three days before alerting his drill instructor. The 19-year-old Marine recruit waited... 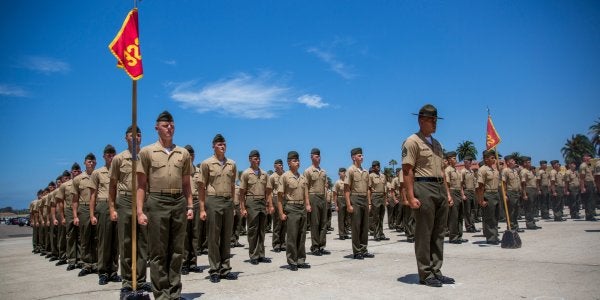 Vincent Grano suffered from nausea and cramps for three days before alerting his drill instructor. The 19-year-old Marine recruit waited as long as he could, but his symptoms became so severe that he had to be admitted to the emergency room. Days after his release, he woke to find himself again in a hospital bed, having lost consciousness the day before. For the next month, he remained at Balboa Naval Medical Center, where he suffered from kidney failure and seizures.

At the time, he could not have known that just by eating the food served at boot camp he had developed a life-threatening disease known as hemolytic uremic syndrome, or HUS, that would ultimately result in his discharge from the service he was trying to join.

Grano's condition results from an E. Coli outbreak at Marine Corps Recruit Depot in San Diego last year. Court documents and a report from the Centers for Disease Control and Prevention allege that the outbreak was the result of undercooked ground beef prepared by Sodexo, a food service company contracted by the Department of Defense. The CDC joined the Navy in its investigation, which showed that the outbreak impacted up to 244 Marine recruits, 15 of whom were diagnosed with HUS.

Although it is unclear exactly how many recruits were discharged due to illnesses caused by the outbreak, three have since filed lawsuits against Sodexo. Tristan Abbott, also 19, is the latest to file charges.

Abbott's symptoms began on October 24, 2017, the day after Grano's symptoms first appeared, according to the lawsuit. The following day, on October 25, another recruit, 21-year-old Michael Baker, also fell ill.

The Marines all suffered similar symptoms: abdominal cramping and nausea that soon evolved into vomiting and bloody diarrhea. Each waited a number of days before reporting their illnesses to drill instructors, hoping their conditions would improve enough to continue in boot camp, where viruses are very common due to the close quarters and high stress.

Drew Falkenstein is one of the attorneys with Marler Clark, a law firm that specializes in food safety litigation and is representing all three former Marines. Despite the firm's history with these types of cases, Falkenstein said this one is especially tragic.

“These are Marines, they didn't want to be discharged. They will contend with the medical realities for the rest of their lives,” he said. According to the CDC report, the average age of the victims is 18.

During his month-long stay at Naval Medical Center San Diego, Baker was admitted to the ICU three times, developed pneumonia and was placed on mechanical ventilation for four days. Abbott, who was also treated in intensive care, suffered from involuntary twitching of his head and limbs. Grano was eventually diagnosed with epilepsy; all three suffer from permanent kidney damage. As a result of these complications, all three have been discharged from the Marine Corps.

Enrico Dinges, director of public relations for Sodexo, stated that while he could not provide detailed comments due to ongoing litigations, the company is looking into the matter and was “sorry to hear that several Marine recruits became seriously ill.”

“We are continuing to seek a complete understanding of the source of their illness, as the CDC report does not conclusively determine or identify the source of the E. coli,” he wrote. Along with MCRD San Diego and Camp Pendleton, Sodexo also provides services to Marines in Camp Lejeune, North Carolina.