Contrary To Rhetoric, Military Mishaps Have Been Declining

Hawks in Congress have said military mishaps are up because the defense budget is down, but the data say otherwise.... 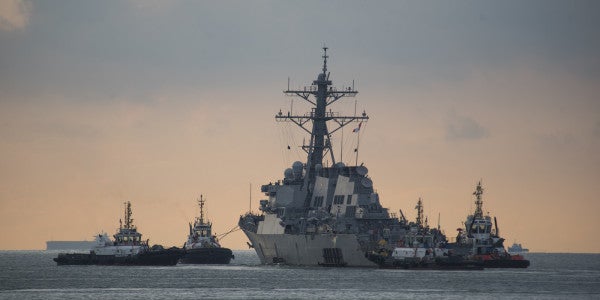 Hawks in Congress have said military mishaps are up because the defense budget is down, but the data say otherwise.

The summer of 2017 saw a rash of fatal military accidents — ships colliding at sea, planes crashing and vehicles catching fire — that were deadlier than attacks from America’s enemies.

Still, major military accidents have been dropping, despite the spike in 2017. They are also not necessarily related to the size of the defense budget, which is at near-record levels, experts say.

Deaths from major noncombat accidents for forces on duty did not increase but have in fact plummeted since 9/11, a Roll Call analysis shows. Eleven of the past 15 years were deadlier than 2017. And the deaths have declined at a rate that does not appear to be explained solely by the reduction in the overall size of the military or its pace of training.

What’s more, there is no evidence that any of the accidents would have been averted by a higher defense budget. Many of the planes and ships were not especially old. Simple human negligence and mismanagement appear to have frequently been factors in the accidents.

Yes, military readiness is threadbare. Navy ships are lacking certifications, and most Army and Air Force units are not ready to fight without days or weeks of preparation. But if the summer of mishaps triggers a buying spree on new weapons and more troops — without sufficient maintenance and training to support them — then a bigger budget could actually result in a less-capable force, analysts say.

“Appropriating more money — especially to buy more ships, planes and vehicles — without the associated manning and training needed to operate and maintain those assets, could actually worsen military readiness in the short term,” said John Pendleton, a senior analyst with the Government Accountability Office.

Investigations are still underway to determine the reasons for each of these incidents. But that has not stopped politicians and interest groups from seizing on the crisis to advance the cause of a bigger defense budget.

“We are now seeing the costs — the tragic but foreseeable costs — of an overworked, strained force, with aging equipment, and not enough of it,” said Senate Armed Services Chairman John McCain, an Arizona Republican, in a floor speech last month. “I don’t want to call another grieving mother or father or spouse after their loved one perished in a mishap that might have been avoided if Congress had done its job.”

“America’s military is in a readiness crisis, and that crisis is costing lives,” Thornberry said in an August statement.

Arkansas Republican Tom Cotton, a member of Senate Armed Services, delivered a budget-related verdict on the incidents at a committee hearing last month, even as their causes have yet to be determined.

“It’s hard to imagine, no matter what your investigations conclude, that some part of the fault does not lie with the United States Congress and the steady erosion of support we’ve provided to the United States Navy and the entire military,” Cotton told Navy leaders.

The worry is understandable. It feels as if military accidents are more frequent than usual — and the warship collisions that killed 17 sailors in the Pacific this summer were certainly abnormal in terms of the number of sailors killed.

But in reality, deadly mishaps are down. The number of noncombat accidents and related deaths has dropped sharply over the past 15 years. Deadly incidents have fallen both overall and in almost every subcategory, whether broken down by armed service or by type of equipment, Roll Call’s analysis shows.

Claude Chafin, a spokesman for Thornberry, said it is not accurate to compare the accident rates today with those of a decade ago, because so much about the military has changed. Its size has shrunk and its training pace has slowed.

Thornberry “isn’t going to wait and see if these casualties are an uptick or the beginning of a larger disturbing trend,” Chafin said.

A smaller military that is training less may explain some of the decline in mishaps. But the accidents have waned at a pace that far exceeds the slight shrinking of the military.

Only aviation accidents have not declined as rapidly as might be expected with a slightly smaller military — but even they have still held essentially flat.

The total number of active-duty service personnel is down 10 percent from its post-9/11 peak in 2003. But major mishaps are down 53 percent in that period.

Likewise, fatalities in military mishaps have dropped at a rate that does not correlate with a reduced defense budget. The average annual number of fatalities in the years before the post-9/11 budget peak in fiscal 2010 was 161, and in the years since it is 61. The budget, while it’s down from the peak, is nonetheless approaching twice the size it was just before 9/11.

While maintenance backlogs may be growing, there is no evidence that has affected any recent crash.

What’s clear is that deaths in accidents are not trending upward, as so many lawmakers have said.

It would be hard to prove that the state of the defense budget did or did not have an effect on any particular mishap. Yet it does not appear that greater defense appropriations would have averted any of the crashes.

While it’s true that much of the U.S. weapons inventory was built in the Reagan era and is due for replacement, aging equipment does not appear, at first glance at least, to have been the cause of many of the recent accidents.

The driving factors in these crashes may be more about people than gear.

Management decisions have come under scrutiny. The warship collisions, for instance, spotlighted the fact that the Navy’s surface ship personnel, unlike its submariners or aviators, lack regulations to keep them from working too many hours with too little sleep. That is not a matter of money.

Adm. John Richardson, the chief of naval operations, told Senate Armed Services last month that “at the core, this issue is about leadership.” The ships collided recently not because of budget shortfalls but because of failures of seamanship and “the fundamentals of watch-standing,” Richardson said.

Training costs money, but that could potentially come from elsewhere in the budget.

“I generally believe it’s not a function of too little money but a combination of too many missions and a misallocation of the money we have,” says Christopher Preble, an analyst with the libertarian Cato Institute and a former Navy officer.

A large amount of money is, has been and will continue to be available at the Pentagon. Viewed as a whole, the defense budget today is as high as it was at the peak of the Reagan-era buildup, in inflation-adjusted terms, analysts say.

When hawks decry hundreds of millions of dollars in cuts to the budget, they are generally referring to the difference between previous plans and actual appropriations — between wishes and reality, as it were — not year-to-year reductions.

On a year-to-year basis, while the budget dropped for a few years after its fiscal 2010 high, the cutback was driven more by the withdrawal of scores of thousands of troops from Iraq and Afghanistan than by the budget caps that are usually blamed.

In the past couple of years, defense appropriations have continued to swell, and Congress has given the Pentagon billions of dollars of relief from the caps created by the budget control law each year since the law was enacted in 2011.

Despite near-record spending on defense, it does not appear to be possible for a larger and more capable military to perform a virtually limitless set of tasks aimed at ensuring global stability in multiple regions.

To meet all its missions under the current adopted Pentagon strategy, the military will require more than $900 billion a year, according to Tom Callender, who was formerly a top Navy analyst and is now a senior fellow at the Heritage Foundation, among other experts.

Hawks will have a hard time securing support for a $700 billion defense budget in fiscal 2018 — let alone a nearly $1 trillion one.

“We don’t have the political will as a nation to fund that, whether you think it’s needed or not,” said Todd Harrison, a budget expert with the Center for Strategic and International Studies.

The defense budget may go up, but it will almost certainly not go up high enough to support the ambitions of hard-liners. So something will have to give.

Even the middle ground of a slightly higher defense budget will be self-defeating if it buys more assets without also ensuring that they — and the people who operate them — are properly supported, experts say.

A downsized U.S. strategy for policing the world has to be at least part of the solution for making the math work at the Pentagon, a growing cadre of experts is saying.

What is needed is “dynamic strategic planning,” said Harrison. The administration must set forth best- and worst-case budget scenarios and then assign strategies to match, he said.

The military may need to be smaller and more high tech, he said. Or it may need to accept lower levels of readiness for some lower-priority or less-likely missions.

Doing more of everything is not the correct answer, analysts say.

“The problem we have and we’ve had for 16 years is we’re not willing to make those choices,” Harrison said.

In other words, the military may be simultaneously too big and too small: too many people, organizations and weapons for any realistically attainable budget to support with enough operating and training money; too small to do everything U.S. leaders want it to do.