An Arlington police officer is popular on social media Thursday because a video shows he gave a teenager caught smoking... 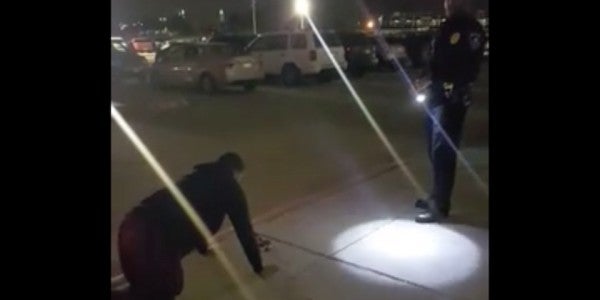 An Arlington police officer is popular on social media Thursday because a video shows he gave a teenager caught smoking marijuana in a movie theater parking lot an unorthodox alternative to arrest: pushups.

Arlington police officer Eric Ball was working off-duty Monday night at a movie theater in Arlington when someone told him a teenager was smoking marijuana outside, WFAA-TV reported. Ball went outside to find the teen finishing a cigarette and discarding it, and Ball smelled marijuana when he approached him.

Arlington police spokesman Lt. Christopher Cook said the teen was respectful and realized he made a mistake, leading Ball to give him an option other than being arrested.

“He said, ‘You give me 200 pushups, I won't put you in jail,’” Cook said. “He could have very well arrested this teen, but instead he tried to do something better.”

The teenager’s name was not known, and he was about 17 or 18 years old.

Ball found his mother inside the theater and told her what happened. She gave him a hug and thanked him, gave her son a stern warning and told Ball she would’ve made him do more push-ups, Cook told WFAA-TV.

© 2016 the Fort Worth Star-Telegram. Distributed by Tribune Content Agency, LLC.