How Cops Are Gearing Up After Mass Killings And Police Shootings

After terrorists blew themselves up and killed 130 people in Paris last November, Miami-Dade police placed an order for 500... 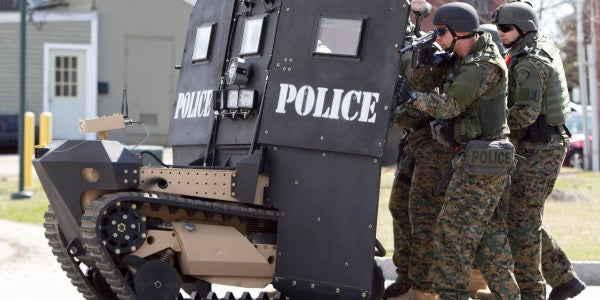 And in Miami, after an Army veteran ambushed and shot 12 Dallas police officers earlier this month, killing five of them, police were outfitted with 687 new steel-plated vests capable of repelling rifle fire.

“I think France was the tipping point. The mayor was always concerned we’d come up against something like that,” assistant Miami-Dade police director Freddy Ramirez said. “They’re tactical components for the climate we’re in right now. You saw what happened in Dallas, traditional rounds were bouncing off him .”

Unlike larger Miami-Dade, which will spend almost $1.5 million on the new protection and weaponry, smaller Miami Gardens isn’t making any purchases. But Police Chief Antonio Brooklen last week ordered supervisors and officers in his city to begin field training for active shooter scenarios.

“It’s very important,” Brooklen said. “Nine out of 10 times in stressful situations, you resort back to your training. If an officer is down, during a rescue or hostage negotiation, if there is an active shooter situation, we can’t wait for the county to show up.”

In Doral, police have been ordered to keep their helmets in their vehicles. In Miami Beach and other cities, patrols have been doubled up and backup calls are more frequent.

In the wake of the recent mass murders, police departments throughout South Florida and around the nation have ramped up training and are spending millions of dollars to keep up with the latest high-powered weaponry on the street.

It happened in 1995 after Timothy McVeigh blew up the Alfred P. Murrah Federal Building in Oklahoma City and killed 169 people. And it happened again in 2001 when terrorists flew planes into buildings and the ground and killed more than 3,000 people on U.S. soil.

Still, the recent attacks in Paris, Orlando and Dallas show the difficulties faced by law enforcement in trying to protect a community. Though semi-automatic gunfire killed most of the people in the three attacks, different methods were used to carry out the murders.

Last November in Paris officers were forced to scramble to several different locations in the city when three ISIS-inspired suicide bombers and seven accomplices hit different locations at once. Cafes, restaurants, even a packed concert hall were filled with rifle fire and bombs as 130 people were killed.

Then in June in Orlando, Omar Mateen, who claimed allegiance to ISIS, barricaded himself in a nightclub and killed 49 people before police blew a hole in the Pulse nightclub and ended the massacre after several hours of failed negotiations. Mateen wounded 53 others.

And in Dallas 10 days ago, police were the targets of Army veteran Micah Xavier Johnson, who, before he was killed, told police he was upset at the treatment of blacks by white police officers and wanted to kill them. Johnson used a high-powered semi-automatic rifle to pick off 12 cops during a peaceful Black Lives Matter protest. Five of them died. Johnson was killed after negotiations broke down and police blew him up with a bomb delivered by a robot.

And there’s no indication that the terrorist attacks will stop any time soon. Last week in Nice, France, a man driving a truck filled with weaponry plowed through a Bastille Day crowd watching a fireworks display and killed at least 80 people. And on Sunday a former Marine named Gavin Long targeted and killed three Baton Rouge police officers with a semi-automatic assault rifle.

The acts were condemned nationwide. On Monday, the Florida Police Chiefs Association released a statement calling the shootings of police “senseless violence,” and said they are being “gunned down because of hate and fear.”

“Our society cannot function without law enforcement who will protect us,” the FPCA said in its statement. “We need to put aside our anger and our prejudice and we need to fight for peace. Without an end to the terrible divides, violence and mistrust, our society will fail.”

In all five attacks, experienced and well-trained police departments were overwhelmed.

The Miami Police Department, which faced a slew of overwhelming situations in the 1980s — like the Cocaine Cowboys and riots — is looking to purchase about 100 new semi-automatic rifles. The department also needs a new armored response vehicle, a controversial Humvee-like truck with a rotating hatch roof, bulletproof glass and multiple gun ports, Police Chief Rodolfo Llanes said.

“It’s a tactical vest that officers wear over their uniform,” Miami Police Maj. Lazaro Ferro said. “It’s a little bit bulky, but you can reach into your trunk and put it right on. They save your life.”

“This is something the police officers deserve in the wake of Dallas, where we had police officers running toward bullets,” said Miami Commissioner Francis Suarez, who sponsored the item.

In recent years, Miami and Miami-Dade police have boosted community policing, becoming more visible on the streets and interacting more with residents. Several departments in South Florida have also trained together in preparation for active shooter scenarios.

An incident the day after the Dallas police massacre on July 7 played out smoothly because of the practice, police said.

That day, someone called in a bomb threat and said there was an active shooter at Nicklaus Children’s Hospital in Miami-Dade’s Schenley Park. With nerves still raw, police went into overdrive.

Hospital loudspeakers ordered doctors, nurses, patients and their families out of the building. While some who panicked stayed in the hospital and ran from room to room, SWAT teams from Miami-Dade and Coral Gables swept the building at 3100 SW 62nd Ave. Dressed in full gear and carrying high-powered rifles, police cleared corridors and conducted room-to-room searches. Armored response vehicles patrolled the grounds outside.

Three hours later the call was deemed a hoax. Everyone was allowed back inside the building. Still, for assistant county police director Ramirez, it was a worthwhile endeavor.

“Given the threats nationally and worldwide, it’s imperative that our officers stay safe,” he said. “Our goal is always to neutralize the threat. We entered Nicklaus to neutralize it. Fortunately, it wasn’t real. But it was a great exercise.”