300+ Americans, 14 with coronavirus, flown to US military bases after quarantine in Japan

The new arrivals will be taken into another two-week quarantine. 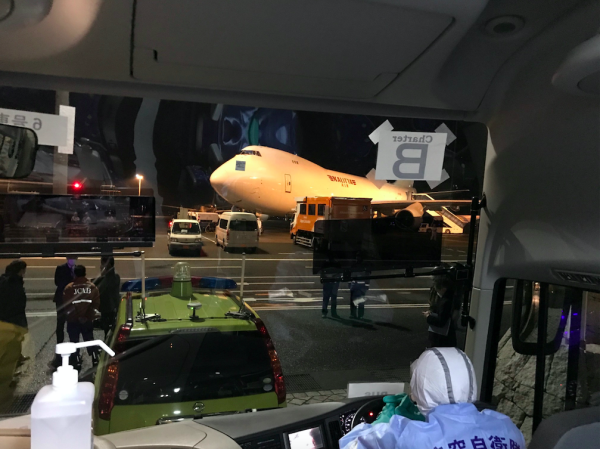 SHANGHAI/TRAVIS AIR FORCE BASE, Calif. (Reuters) – More than 300 American cruise liner passengers, including 14 who tested positive for coronavirus, were flown home to military bases in the United States, after two weeks under quarantine off Japan.

The cruise ship Diamond Princess, with more than 400 cases by far the largest cluster outside China, has become the biggest test so far of other countries' ability to contain an outbreak that has killed 1,770 people in China and five elsewhere.

Ground crew in anti-contamination suits met a chartered jet that touched down at Joint Base San Antonio in Texas, and passengers could be seen climbing down the stairs wearing face masks in the pre-dawn mist. Another flight landed at Travis Air Force Base in California hours earlier. Those arriving were taken into a two-week quarantine.

Although U.S. officials said passengers with coronavirus symptoms would not be taken, 14 passengers found at the last minute to have tested positive were permitted to board the planes. The U.S. State Department said the infected passengers were kept in isolation on the flights.

Across mainland China, officials said the total number of coronavirus cases rose by 2,048 to 70,548. That was slightly more new cases than were reported on Sunday, but hundreds fewer than reported on Saturday.

Chinese authorities say the stabilization in the number of new cases is a sign that measures they have taken to halt the spread of the disease are having an effect.

However, epidemiologists say it is probably still too early to say how well the outbreak is being contained within China and its central Hubei province, where the virus first appeared. Official figures of new cases have leveled off in the past, only to jump suddenly after changes in methodology.

China has responded to the COVID-19 virus by locking down Hubei's provincial capital Wuhan, a megacity of 11 million people, and imposing restrictions in a number of other cities.

But the ruling Communist Party is also under pressure to prevent the economy from crashing and get people back to work.

China's central bank cut the interest rate on its medium-term lending, a move that is expected to pave the way for a reduction in the benchmark loan prime rate on Thursday. Beijing has also announced plans for cuts in taxes and fees.

Even so, economists expect China's economic growth to slow. Ratings agency Moody's on Monday lowered its 2020 GDP growth forecast to 5.2%, making it likely China would miss a goal to double GDP over the decade to 2020.

Around half of all known cases of the virus outside China have been found aboard the Diamond Princess, where around 400 people have tested positive since the cruise liner was ordered to stay under quarantine off Japan on Feb. 3.

Several other countries have announced plans to follow the United States in bringing passengers home. Around half of the 3,700 passengers and crew are Japanese.

Matthew Smith, an American passenger who remained on the ship after refusing to board the voluntary repatriation flights, tweeted that staying behind was the “best decision ever”.

“US Gov't said they would not put anyone on the planes who was symptomatic, and they ended up knowingly and intentionally putting on 14 people who actually have the virus,” he wrote.

Authorities around the world were also trying to track down passengers from another cruise liner, the Westerdam, which was turned away from ports across Southeast Asia for two weeks before docking in Cambodia on Thursday.

One American passenger who disembarked in Cambodia tested positive for the virus in Malaysia on Saturday.

Carnival Corp., which operates both cruise liners, said it was cooperating with authorities in trying to trace other passengers from the Westerdam. None of the other 1,454 passengers and 802 crew had reported any symptoms, it said.

“Guests who have already returned home will be contacted by their local health department and be provided further information,” a statement from the company's Holland America Line unit said. Hundreds of passengers are still in Cambodia, either on the ship or in hotels.

“We will all be tested for the coronavirus today and tomorrow by the Cambodian Ministry of Health,” said passenger Holley Rauen, a public health nurse and midwife from Fort Myers, Florida. “We have no idea when we get to get home.”

People wearing face masks walk inside a subway station, as the country is hit by an outbreak of the novel coronavirus, in Shanghai

CHINA BACK TO WORK?

After an extended Lunar New Year holiday, China needs to get back to work or suffer severe economic consequences. There is a proposal to delay the opening of the annual session of parliament, due on Feb. 24.

Some cities remain in lockdown, streets are deserted, employees are nervous, and travel bans and quarantine orders are in place around the country. Many factories have yet to re-open, disrupting supply chains in China and beyond.

In Japan, where data showed on Monday that the economy had already shrunk last quarter at the fastest pace in almost six years, the impact of the virus is expected to show up in the current quarter, stoking fears of recession.

Trade-dependent Singapore downgraded its 2020 economic growth forecast and has said recession is possible. It is set to unveil measures to cushion the blow on Tuesday.

Organizers of the Tokyo Marathon have decided to limit the March 1 race to top-level athletes, banning 38,000 general participants, a person with knowledge of the issue told Reuters.

Japan's Imperial Household Agency said it would cancel Emperor Naruhito's public birthday address on Feb. 23, his first since his coronation last year. The event regularly attracts tens of thousands of people to the inner grounds of the Imperial Palace in the heart of Tokyo.