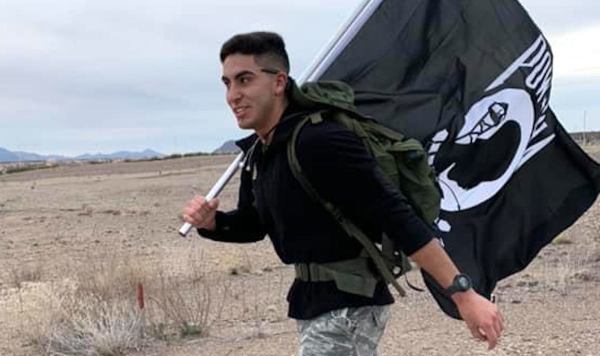 LAS CRUCES – A photo of a lone soldier carrying a Prisoners of War flag running through the streets of Las Cruces on Sunday is gaining lots of attention on social media after the 31st annual Bataan Memorial Death March was cancelled due to coronavirus concerns.

David Saenz, 21, is a U.S. Air Force air traffic controller stationed at Holloman Air Force Base. A Las Cruces native, Saenz said his intent was not to be recognized or praised but to honor all the military members who defended the Philippines during World War II.

The Bataan Memorial Death March, founded in 1989 by New Mexico State University ROTC cadets, commemorates the American and Filipino soldiers in World War II who were forced to march 65 miles through jungle terrain under torture by the Imperial Japanese Army. The trek is held annually at White Sands Missile Range.

“I didn't go out on Sunday for people to say thank you or to honk at me or for my own self recognition because that defeats the whole purpose of what the Bataan March,” Saenz said. “People always say they're never forgotten but I like to put action into those words because it brings more meaning to me.”

The march goes on

Saenz said this would've been his third time participating in the annual marathon and said he trained for months for the challenging desert trek.

“The first year I did it was with my first supervisor and I was brand new to the Air Force and he introduced me to it,” Saenz said. “The whole energy and atmosphere of the event is really powerful and it had a very big impact on me.”

Saenz said he felt compelled to continue the march to honor the service members even if he was the only one.

“Me being in the military I couldn’t let that go unnoticed. So, that’s why I wanted to do it,” Saenz said. “I wanted to do it on my own even if it was cancelled. It's important to honor those military members who sacrificed so much.”

Saenz said he ran 16 miles with a 35-pound rucksack on his back on Sunday.

“I didn't do the full marathon which is 26 miles but I did run 16 miles. I started in the Plaza de Mesilla and I went up University Avenue down Triviz and up Telshor Drive all the way down to Lohman down to Roadrunner and finished at Veterans Park,” Saenz said. “In the actual event you can do light or heavy. I've done the heavy division before with a pack of 35 pounds. I loaded up 35 pounds in my rucksack and I carried the POW flag because it made it more noticeable. That was my whole intent to show everyone that they're not forgotten.”