While other services canceled, the Marines do not see a reason to do so at this time and are following Centers for Disease Control and Prevention guidelines, a Marine Corps spokesman said. 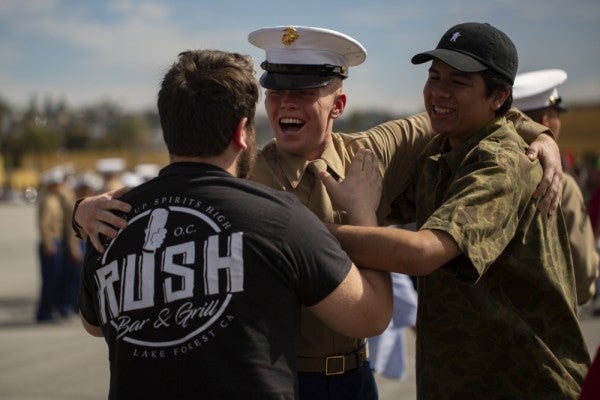 A public boot camp graduation ceremony Friday at the San Diego Marine Corps Recruit Depot will proceed as planned, a Marine spokesman said Tuesday, after the Navy and Air Force each canceled their public graduations in the midst of the spreading coronavirus.

A Marine Corps spokesman told the Union-Tribune Tuesday that, while other services canceled, the Marines do not see a reason to do so at this time and are following Centers for Disease Control and Prevention guidelines.

It is expected that about 400 recruits will graduate, and there will be at least 1,000 spectators and guests. Everyone on base will be given a flier about coronavirus transmission facts, officials said.

In an email Monday, Capt. Martin Harris said: “MCRD SD is conducting prudent deliberate planning with MCRD PI (Parris Island) and service level leaders to ensure the safety of recruits, permanent personnel, and families that come to the base for graduation.”

Marine graduation events include a Thursday family day, when family members can come on base and visit graduating Marines, and the on-base ceremony on Friday. Marines then are allowed off base for liberty.

On Monday, the Navy announced on Facebook it is canceling all public recruit graduations at its Great Lakes, Ill., boot camp to prevent the potential spread of COVID-19 to either recruits or Navy families, out of “an abundance of caution.”

It also canceled recruit liberty, in which newly graduated sailors are allowed to spend graduation weekend off base. Instead, according to the Recruit Training Command's post, sailors will report directly to their follow-on assignments.

On Tuesday, the Air Force followed suit, saying that families will not be allowed to attend its boot camp graduation ceremonies.

Other military commands around San Diego are discussing further preventive measures, including the possibility of limiting non-essential travel, although, as of Tuesday, there were no official cancellations, a Navy spokesman said.

According to a U.S. Northern Command spokesman, military commanders have autonomy to determine what measures to take to protect troops from contracting the virus.

According to the latest guidance from the Pentagon, those measures are limited to education, increased hygiene and social distancing.

“These measures include educating personnel on the threat and reviewing plans to limit communication of the virus,” said Lt. Cmdr. Mike Hatfield in an email. “Additional measures include proper hygiene practices such as washing hands with soap and water for at least 20 seconds, avoiding contact with those who have been sick, practicing social distancing, going to the doctor if feeling ill, and disinfecting frequently touched surfaces in order to prevent the spread of COVID-19 and other viruses.”

Hatfield said the top concern for commanders is to keep their troops healthy and ready to complete their missions — and sometimes, those measures might be different from one region to another, one command to another and one boot camp to another.

“Commanders at all levels of the chain of command are assessing risks to the force and implementing mitigation protocols to ensure their assigned forces remain protected and fully prepared to respond to any contingency,” Hartfield said.

The Army and Coast Guard have not announced similar cancellations at this time.