After discovering a sailor with coronavirus, the Navy crowded dozens into one room

It wasn’t a surprise when the U.S. Navy announced Sunday that the fast-spreading coronavirus had made its way on board one of its ships, infecting a sailor on the USS Boxer, docked in San Diego. But what happened next raises questions about how the Navy will respond to the virus within the tight quarters of its seabound vessels 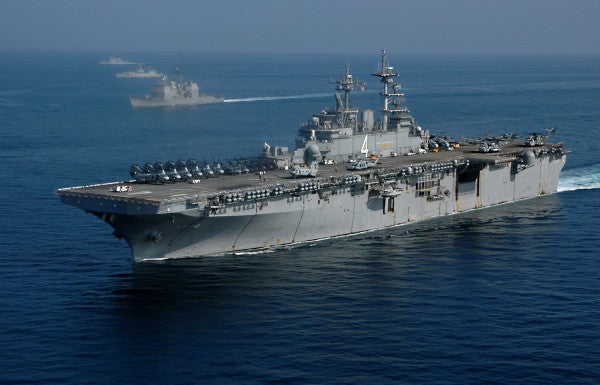 It wasn’t a surprise when the U.S. Navy announced Sunday that the fast-spreading coronavirus had made its way on board one of its ships, infecting a sailor on the USS Boxer, docked in San Diego.

But what happened next raises questions about how the Navy will respond to the virus within the tight quarters of its seabound vessels.

On Monday morning, in response to the discovery of the infected sailor, the warship’s leaders ordered dozens of senior enlisted sailors and officers into a cramped room on the ship to brief them on the crisis and proper social distancing, according to a sailor who attended the meeting.

That action, taken as the Navy is still evaluating who aboard the ship had come into contact with the infected sailor, runs counter to Centers for Disease Control and Prevention guidelines aimed at controlling the spread of the coronavirus.

According to the sailor, the meeting in the ship’s wardroom, a gathering place, lasted about 30 minutes and forced about 80 crew members to stand roughly 2 to 4 feet from one another — far less than the 6-foot spacing called for by the CDC.

The meeting on the ship — which also has outdoor spaces that possibly could have been used instead — left some attendees feeling angry and worried that they’d been placed in unnecessary danger aboard the vessel, the sailor said.

“Definitely not enough room to maintain appropriate distance,” said the sailor, who requested anonymity because he was not authorized to talk to the media. “People are wondering why we gathered in a room contradictory to CDC guidance.”

A Navy spokesman confirmed the meeting took place, but he would not comment on whether it was appropriate or violated federal infection control guidelines.

In a statement, the spokesman said that Navy commanders have been told “to the largest extent possible to implement social distancing,” including avoiding large gatherings and maintaining a 6-foot space from other sailors when possible.

According to the Navy’s statement Sunday, a sailor assigned to the Boxer, an amphibious assault ship, had tested “presumptive positive” for the virus that causes COVID-19. It was the first case of a sailor on board a Navy ship apparently contracting the disease. The sailor, the statement said, is now quarantined at home, along with other members of the crew believed to have been in close contact, while the ship’s crew conducts “a thorough cleaning” and takes “appropriate preventative measures.”

Gregg Gonsalves, an epidemiologist at Yale School of Medicine, told ProPublica that “putting 80 to 100 members of the crew together in a small space without knowing all who were exposed to the original index case means additional transmissions may have happened in that meeting.”

The Navy spokesman told ProPublica that the initial investigation into whether any other personnel came into close contact with the infected sailor was completed, but whether other sailors were infected is still being evaluated.

To make matters worse, the sailor who attended Monday’s meeting said they were briefed that limited testing kits are available.

The case of the Boxer illustrates how challenging it may be for the Navy to avoid the spread of the highly infectious virus aboard ships and submarines that require sailors to work in close quarters, sometimes for monthslong missions.

Traversing a Navy ship, for example, requires walking through a series of tight corridors with low ceilings and stale air. Some passageways are so narrow that for one sailor to pass another, one practically needs to press flat against the wall. There are doors along corridors — a measure to keep any flooding contained. A sailor walking the length of the Boxer would have to stop multiple times to turn a wheel or pull a latch to open a door, then do the same thing on the other side to seal the door again. Stairways are closed off in similar fashion.

Eating on a ship is done in close quarters as well. Sailors dine cafeteria-style, handing their plates to servers to scoop food from large bins like at a buffet. At peak hours the tables would be packed, with everyone sitting fairly close to one another — exactly the kind of dining that many cities have temporarily banned as a measure to stop the spread of the virus. The Boxer is about 840 feet long, about 80% of the length of the Eiffel Tower if it were laid flat.

It’s unclear when the Boxer will head out on its next mission, but its webpage pledges a commitment to safety: “Everything we do on and off BOXER will be done safely.”