The Corps Is Developing A Plan To Base Marines In Norway

The United States and Norway are considering basing a rotational force of up to 300 Marines in the Nordic country,... 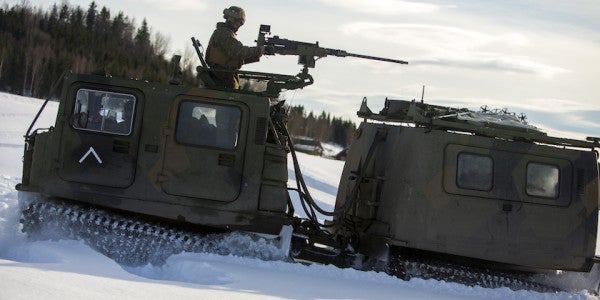 The United States and Norway are considering basing a rotational force of up to 300 Marines in the Nordic country, but the measure still requires the approval of the Norwegian parliament, local media reports say.

The move would place Marines, who have a long-standing training partnership with their Norwegian counterparts, at a military compound about 700 miles from the Russian-Norwegian border, the newspaper Adresseavisen reported.

The plan, however, doesn’t call for a permanent basing of U.S. forces in the country. Instead, rotational troops would offer more opportunity for training as well as storage of equipment, defense officials told Norwegian media.

During the Cold War, Norway was extensively used by NATO forces for cold weather training — surviving and operating in the harsh, freezing weather conditions. Troops were taught practical skills such as skiing, using snowshoes, building snow caves, as well as surviving avalanches.

With 300 Marines as a steady presence on the Norwegian frontier, the U.S. troops could serve as a trip-wire force in place to backup Norway in the event of a crisis.

The potential moves come at a time when relations between the West and Russia are at a post-Cold War low. Since Russia’s 2014 intervention in Ukraine, the U.S. has sought to beef up its presence along NATO’s eastern edge in the Baltics. Next year, the U.S.-led NATO alliance will establish multinational battalions in Latvia, Estonia, Lithuania and Poland, where a contingent of U.S. Army cavalrymen will serve as the U.S. contribution to the NATO plan.

In Norway, officials have expressed growing concern over Russia.

“We have an increasingly unpredictable neighbor to the east which is strengthening its military capacity, and showing willingness to use military force as a political tool,” Prime Minister Erna Solberg said in June.

Last week, Norway unveiled a plan to increase 2017 spending on its armed forces by $230 million as well as a more comprehensive plan to boost expenditures over 20 years.

The Marines already store tanks, artillery and other armored vehicles in climate-controlled caves in Norway as part of a prepositioning program that dates back to the days of the Cold War. For the Corps, that has cut down on logistics costs when it trains in the region and also serves as ready weaponry in the event of a crisis.

For U.S. European Command, building up weapons stockpiles is a key part of its strategy to establish a more combat-ready force. U.S. Army Europe also is moving forward with plans to warehouse tanks, artillery and other fighting vehicles at locations around Europe.

“It always takes time to deploy forces to a certain area. When you have the equipment pre-positioned, you can fly in the personnel and you will be faster and ready to conduct operations, so that’s always the advantage of having in Norway,” Norway’s Maj. Gen. Yngue Odlo said earlier this year while speaking about U.S. prepositioning of equipment.

For the past several years, the Marines have relied on rotational units to enhance their forward presence in Europe, particularly in the Black Sea region. In addition, Special Purpose Marine Air Ground Task Forces are situated in Moron, Spain, for crisis-response missions in Africa, and a unit focused on training efforts in Africa is based in southern Italy.