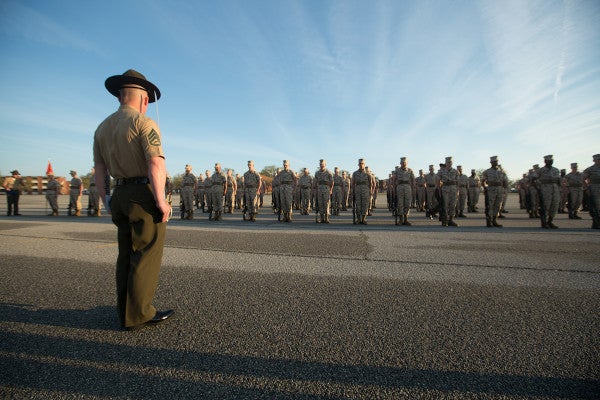 The Marine Corps says it will not tell the public about administrative actions it takes against some Marine Corps Recruit Depot Parris Island personnel linked to allegations of hazing and recruit abuse because they are not high-visibility leaders.

In September — almost six months after the death of a Muslim-American recruit and following investigations that found widespread misconduct — the Corps announced 20 drill instructors and leadership personnel could face military justice or administrative action.

Currently, the fates of only half those Marines — including the reliefs of command of two high-ranking officers and their sergeant majors, which the Corps calls administrative actions — are known.

“All remaining personnel of the 20 have either faced administrative action or are pending decision on administrative or punitive action,” Marine Corps Training and Education Command spokesperson Capt. Joshua Pena said when asked about the Marines’ status this week.

“And the command cannot speak to the specifics of individuals who have faced administrative actions,” he added.

When asked why the Corps notified the public about the reliefs of former Parris Island Recruit Training Regiment Commander Col. Paul D. Cucinotta and former 3rd Recruit Training Battalion Commander Lt. Col. Joshua Kissoon — and their respective sergeant majors — Pena said it was because those four men were high-visibility leaders.

“We do have an obligation to make public actions against high-vis leaders,” Pena said.

Kissoon and Cucinotta and their sergeant majors were relieved in March and June, respectively, after the death of 20-year-old recruit Raheel Siddiqui, a Muslim-American of Pakistani descent who died following a three-story fall from his barracks March 18.

Shortly before that fall, a drill instructor allegedly made a reportedly ill Siddiqui run sprints through the barracks and, after the recruit fell to the floor, slapped him violently in the face.

Siddiqui then reportedly got up, ran out the back door of the barracks and jumped, falling nearly 40 feet. Siddiqui had been on Parris Island 11 days.

The drill instructor is reported to have called him a “terrorist” at some point before his death. That drill instructor, the Corps said, should not have been supervising recruits because he was being investigated for an earlier incident when he allegedly ordered another Muslim recruit into a clothes dryer and interrogated him about his faith and loyalty.

In the wake of Siddiqui’s death, three investigations were linked. Training and Education and Command took charge of them, Pena said, and interviewed as a witness Parris Island’s then-commanding general.

That meant the then-commanding general could not be the convening authority for any courts-martial, Pena said, explaining why TECOM’s Maj. Gen. James W. Lukeman had assumed jurisdiction over the military justice process, and why hearings have not been held on Parris Island — a move local military attorneys have called “unprecedented.”

“It’s not typical,” Pena said when asked about the move. “But it’s the appropriate action that needed to be taken in the circumstance.”

When asked if any administrative action had been taken against the former Parris Island commander, Brig. Gen. Terry V. Williams, Pena said: “No. None of the investigations uncovered any evidence that Brig. Gen. Williams demonstrated a lack of supervision or responsibility that contributed to the situations examined by the investigations.”

Beaufort attorney Jeff Stephens, who served as a Marine Corps prosecutor and defense counselor on Parris Island, said he stands by his comment that the move was unprecedented.

He said there’s no rule that says the investigating authority has to be the convening authority.

“There’s nothing that says — and it’s silly to draw some connection between the two things — that because TECOM handled the investigations, they have to convene the courts-martial,” Stephens said.

While it might have been appropriate for TECOM to handle the investigations, Stephens said he could think of “no reason” not to have the hearings on Parris Island — especially given the arrival of new depot commander Brig. Gen. Austin E. Renforth, who took command after the allegations had surfaced, and who would, in theory, be an objective convening authority.

Stephens, who said he is not representing any of the aforementioned Marines, said moving courts-martial away from Parris Island made it harder for the drill instructors to defend themselves. He reiterated concerns about Lukeman’s ability to select juries that excluded drill instructors and Marines with recruit training experience. And Stephens worried that moving the hearings could limit witness availability since, seemingly, many witnesses could be on Parris Island.

He also said Parris Island has a courtroom, and said that Lukeman could opt to hold hearings and courts-martial locally.

So far, the only hearings that have been held occurred at Marine Corps Base Quantico, in Virginia. Two preliminary hearings scheduled this month at Camp Lejeune, N.C., were canceled because the accused Marines waived their right to appear.

The other 10 Marines — whose fate remains unknown — are a mixture of drill instructors and “other leadership,” Pena wrote in an email.

And other drill instructors’ cases, Pena said, “are being carefully reviewed to determine the most appropriate action to be taken.”

The two drill instructors who waived their preliminary hearings are both linked to the clothes dryer incident.

One of them is linked to Siddiqui’s death.