A federal judge has dismissed a major lawsuit against a defense contractor by veterans and their family members over burn... 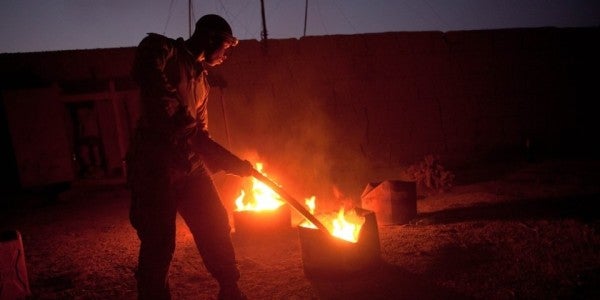 A federal judge has dismissed a major lawsuit against a defense contractor by veterans and their family members over burn pit operations in Iraq and Afghanistan that plaintiffs said caused them chronic and sometimes deadly respiratory diseases and cancer.

In the decision, U.S. District Court Judge Roger W. Titus wrote that the company, KBR, could not be held liable for what was essentially a military decision to use burn pits for waste disposal. Titus said holding the Pentagon responsible was outside of his jurisdiction.

“The extensive evidence … demonstrates that the mission-critical, risk-based decisions surrounding the use and operation of open burn pits … were made by the military as a matter of military wartime judgment,” Titus wrote in an 81-page opinion.

The dismissal — the second by Titus in the case — deals a major blow to the more than 700 veterans, family members and former KBR employees who brought the suit.

Plaintiffs were disappointed, and some were furious.

“My husband is DEAD because of burn pits,” Dina McKenna, whose husband, former Army Sgt. William McKenna, died in 2010 from a rare form of T-cell lymphoma after serving in Iraq, told McClatchy in an email. “I want someone to be held accountable.”

Susan Burke, a Baltimore-based attorney who represents the plaintiffs, told McClatchy that her clients will file an appeal to the 4th Circuit.

The litigation, which consolidates cases across the country, contains 63 complaints, including 44 national class action suits.

The plaintiffs charged that KBR, a government contractor and former Halliburton subsidiary, operated the burn pits in Iraq and Afghanistan irresponsibly, running them in locations near U.S. troops’ living quarters and work spaces, and burning items that were not intended for the pits, including paint, batteries, computers, fuel, plastic water bottles and human medical waste.

The plaintiffs say they suffer from a range of diseases resulting from exposure: respiratory illnesses such as life-threatening constrictive bronchiolitis, gastrointestinal disorders, neurological problems and cancers. In one Washington, D.C.-based class action, a dozen of the plaintiffs have died since the cases were consolidated.

Titus said in his decision that he had no doubt that “many of (plaintiffs) have been harmed, at least, by some extent by the use of open burn pits or by the water they drank in Iraq or Afghanistan.” But, he added, the military recognized there were certain health risks associated with the use of burn pits but balanced those risks against the greater risk of harm to military personnel if another method of waste management — such as removing trash to an off-base landfill or shipping it elsewhere — was used.

“The decision to use the burn pits was not made by the contractors but rather than by the military,” he wrote.

He added that at no point was KBR in charge of deciding what to burn in the pits or where to place them. He did not question or explore the Defense Department’s choice to use burn pits, adding that the wartime choice by an executive branch entity was outside his jurisdiction, not appropriate for judicial review.

Titus made a similar argument in 2013 when he first moved to dismiss the case. He agreed that the company should not be held accountable because the decision was a military one.

The plaintiffs appealed, arguing that KBR operated on a contract that gave company employees leeway in managing waste treatment in the combat zones. Attorneys for the plaintiffs said information was needed before a final ruling could be made.

The 4th Circuit Court of Appeals agreed and returned the case to Titus’ Maryland courtroom in 2014.

A bulldozer tries to maneuver refuse into the burn pit at Balad, Iraq, Sept. 24, 2004.DoD photo

Titus said he is “sympathetic to the claims of the plaintiffs” but added that the resolution to their issues “is through the military and legislative process, not through the judiciary.”

He also pointed out in his opinion that troops who were harmed by their military service are not without “significant remedies,” citing veterans compensation benefits as well as legislation introduced this year in the House and Senate that is designed to support veterans exposed to burn pits.

A spokeswoman for KBR released a statement saying the company’s employees operated the burn pits “safely and effectively at the direction and under control of the U.S. military” and are satisfied with Titus’ decision.

“KBR believes the court made the correct decision, and we are pleased that this legacy case is one step closer to final resolution,” the statement read.

(Kime is a special correspondent.)