Raheel Siddiqui's family brought the claim after investigators found evidence of hazing by Siddiqui's drill instructor prior to the 20-year-old recruit's death at the training base at Parris Island, South Carolina, in 2016. 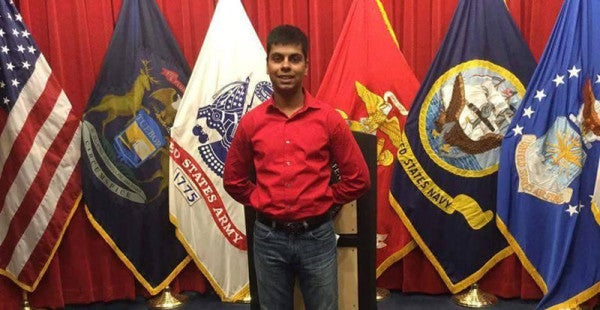 WASHINGTON – An appellate court panel rejected on Tuesday the $100-million wrongful death claim brought by the family of a Marine recruit from Taylor who died in a fall, saying it was bound to do so under a much-criticized Supreme Court precedent.

Raheel Siddiqui's family brought the claim after investigators found evidence of hazing by Siddiqui's drill instructor prior to the 20-year-old recruit's death at the training base at Parris Island, South Carolina, in 2016.

Gunnery Sgt. Joseph Felix in 2018 was convicted by a military court and sentenced to 10 years' confinement for mistreating recruits, including Siddiqui.

According to prosecutors, Felix called the former Truman High School valedictorian a “terrorist” and slapped him at least once during training before Siddiqui ran out a door in his barracks and leaped over a third-floor railing.

Siddiqui's death was ruled a suicide but his family has rejected that finding, saying he wouldn't have killed himself as a faithful Muslim and son.

Responding to the dismissal of the claim by a three-judge panel for the 6th U.S. Circuit Court of Appeals in Cincinnati, the family's lawyer, Shiraz Khan, said they will continue to fight, though it was not immediately clear whether they intend to ask the appeals court to reconsider or the U.S. Supreme Court to review the case.

“This case needs to be looked at specifically in parts, the wrongs committed against Raheel Siddiqui long before his enlistment and all that transpired after,” Khan said. “(His family members) are relentless in their pursuit for justice, not only for their son but for (anyone) who wants to serve his or her country.”

In the lawsuit, Siddiqui's family said they and he should have been warned before he even went to boot camp that Felix was under investigation for earlier allegations in which he ordered another Muslim recruit into a dryer on base and turned it on.They also said the Marine Corps failed to adequately protect Siddiqui from discrimination and hazing on the base.

But the panel upheld a lower court's decision to dismiss the case, saying it was bound to do so — whether it likes it or not — by the so-called Feres doctrine.

Arising out of a case from 1950, that precedent holds that the government cannot be sued under the Federal Tort Claims Act for injuries sustained to active duty military personnel, including training recruits, even if negligence was the cause.

The appeals court panel noted the reservations expressed by the lower court judge, U.S. District Court Judge Arthur Tarnow, in dismissing the case last November, but said, like him, its hands were tied by the Supreme Court precedent, which many service members and their families have challenged as unfair.

As recently as this spring, Justice Clarence Thomas complained about the precedent as the Supreme Court turned back a claim involving alleged medical malpractice, saying the “unfortunate repercussions” of Feres continue to “ripple through our jurisprudence.”

Feres' defenders, however, say that it is necessary to maintain order and discipline and not upend the relationship between command and its personnel.

“Plaintiffs call upon us to disregard or overrule Feres,” the three-judge panel wrote. “We would not be the first court to consider doing so. As (another panel of judges) noted, 'We can think of no other judicially created doctrine which has been criticized so stridently, by so many jurists, for so long.' “

“(But) Unless and until the Supreme Court overturns Feres, we remain bound by (it).”