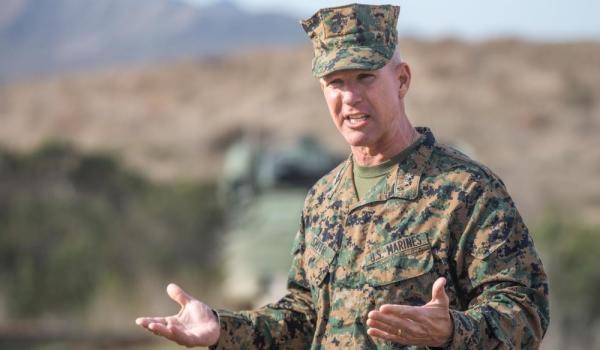 Amid a full-court press on hazing prosecutions within the West Coast-based 1st Marine Division that has resulted in some 30 Marines getting thrown in the brig and more than a dozen kicked out of the service, an appeals court is chastising the general leading the crackdown, saying he made the issue too personal.

A Feb. 15 authored opinion from the Navy-Marine Corps Court of Criminal Appeals, or NMCCA, upheld a military judge's decision to remove Maj. Gen. Eric Smith, commanding general of 1st Marine Division, as the oversight authority in the case of one Marine facing hazing charges, Sgt. Jaime Ortiz. The decision was first reported by the Washington Times.

The judge in that case, Col. Matthew Kent, went further and dismissed the charges against Ortiz without prejudice, leaving open the possibility of new charges being filed in the future.

Ortiz, who was placed in pretrial confinement on July 13, 2017, was accused of hazing five junior Marines in his unit and assaulting two junior Marines by striking them on the chest with his fist.

Ortiz' case was unfolding as Smith's crusade against hazing was gaining full strength. Smith took command of 1st Marine Division on June 22, 2017, and had been at his post for less than a month before firing off a series of emails regarding hazing to all commanders and sergeants major within the division.

The messages put the issue in stark terms, invoking the honor of the Marine Corps and referencing the recent deaths of Marines in a tragic KC-130 Hercules crash.

“[T]he Marine Corps owns the barracks, not a few salty who probably can't fight their way out of a wet paper sack,” Smith wrote in a July 12 email, published in the NMCCA opinion. “We're the [1st MarDiv], victors at Guadalcanal, and we're reduced to dealing with jackassery from a few LCpls who think they are in charge. That will be proven wrong asap. We have 12 dead Marines in a KC-130 crash … and these few LCpls who haze can't even pay them the respect our Commandant has asked for.”

Smith went on to say that the junior Marines engaging in hazing had “flipped the bird” at him personally by engaging in such behavior.

By October, at least 15 Marines from 1st Marine Division had been kicked out of the Corps for hazing.

An attorney representing some of the Marines accused of hazing, Phil Stackhouse, told Military.com in October that many were getting administratively separated through a notification process that allowed them to defend themselves only in writing. The system “eviscerates due process,” he said.

“These are first-tour Marines who have leadership positions, who may have been led astray by their immediate seniors,” he said at the time. “It's disappointing that their command is not giving these guys a second chance when you're dealing with relatively minor misconduct.”

Kent, the judge in the Ortiz case, found that Smith's words and actions would lead a reasonable person to believe he had a personal interest in the case, rather than the appropriate impartiality of a convening authority.

“MajGen Smith's statements suggest that he was personally offended by those alleged to have violated his hazing policy. He repeatedly emphasized that he would show those accused of hazing who was really in charge,” Woodard wrote in the court's opinion.

“He was unwilling to wait for the law enforcement investigative process to conclude before taking action against those accused of hazing,” Woodard continued. “He equated the actions of those accused of hazing as a show of disrespect to the Commandant of the Marine Corps and their fellow Marines who had died while in service to the nation. He threatened to shut down all operational training in 1st MarDiv in order to address hazing if it continued.”

Most troubling, Woodard wrote, was Smith's statement that the Marines who engaged in hazing had “flipped the bird” and he was personally offended by their actions.

“Having considered the totality of the actions taken and statements made by MajGen Smith — and considering their demeanor, tone, and context — we agree with the military judge's conclusion that a reasonable person would impute to MajGen Smith a disqualifying personal, rather than official, feeling or interest in the outcome of the appellee's case,” Woodard wrote.

A spokesman for 1st Marine Division, Capt. Paul Gainey, referenced official command guidance published by Smith on Aug. 30 that takes a more measured tone on the issue of hazing.

“I have a strong personality and am in a position of authority, so I am obligated to ensure that none of you interpret my message against hazing as directing any specific outcome for any particular case,” Smith wrote. “More important than my desire to stamp out hazing is our collective requirement to adhere to our constitution and the Uniform Code of Military Justice.”

Gainey said Smith's guidance on the issue was clear.

“Hazing is contrary to our core values and is prejudicial to good order and discipline. It threatens the strength of our small units and directly impacts our combat readiness,” Gainey told Military.com in a statement. “Hazing in not acceptable in the 1st Marine Division — any hazing will be investigated and adjudicated appropriately.”