They really did it: National Guard members created a COVID-19 challenge coin 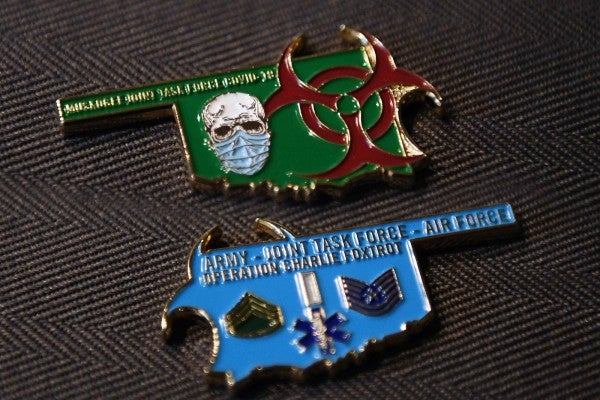 It has been nearly three months since National Guard troops across the country began to mobilize to support response to the novel coronavirus pandemic. In almost no time, goofy and crude “morale patches” began to pop up commemorating the rushed and sometimes chaotic mission.

But now Guard members in Oklahoma have gone one step further, creating an actual challenge coin by which they can remember their once-in-a-lifetime mission.

The coin was designed by Oklahoma Army National Guard Specialist Kyle Dennis, 120th Engineering Battalion, 90th Troop Command, according to a National Guard news release. It’s cut in the shape of the panhandle state of Oklahoma, overlapped with the biohazard symbol. The battalion is based in Muskogee, Oklahoma.

The front of the coin features a skeleton wearing a surgical mask; the back features Air Force and Army rank insignia, a medical symbol and a cheeky reference to “Operation Charlie Foxtrot,” a mission nickname that stands for “Clusterf—.” It’s not clear if the news release writers caught the reference.

“A group of us were talking one day about ways we can remember this mission, and the idea of a challenge coin came up,” Dennis said in a statement. “We had a bunch of ideas and we're able to narrow it down.”

The three ranks on the coin: Air Force technical sergeant; Army staff sergeant; and Army first lieutenant, define “the scope of our rank structure here,” Dennis said, speaking of his unit and region.

Oklahoma Army National Guard 1st Lt. Kyle Downen, the officer in charge of the Muskogee region, said the coin was a morale booster and a memento, adding that he had bought a few extra to give to coworkers at his civilian job.

“I think for me, it stems from the tradition of the impact award during [advanced individual training]”, Downen said. “The challenge coin is a great way to boost the entire unit’s morale with something that just comes out of your pocket. It’s a great way to show your appreciation right then and right there for something amazing that you have seen.”

Roughly 200 Oklahoma National Guard members remain mobilized in support of COVID-19 response efforts. As of this week, some 37,000 National Guard members in 50 states, three territories and Washington, D.C. continue pandemic response efforts at the request of state governors and relevant local leaders. At peak, roughly 47,000 Guard troops across the nation were called up for response.

The manner in which all these Guard members were called up has been the subject of some scrutiny. Orders set by the Federal Emergency Management Agency, or FEMA, initially called for Guard deployments to end June 24 — one day shy of securing federal retirement and education benefits for troops. President Donald Trump ultimately extended the orders to allow Guard members to receive those benefits.

Some lawmakers have also called for hazard pay for Guard members who may face greater exposure to the virus by dint of their duties. To date, 1,682 members of the National Guard Bureau have been confirmed as having COVID-19, less than the Army and Navy, but more than the Air Force and Marine Corps combined.