The total U.S. military infections in Japan now stands at 201. 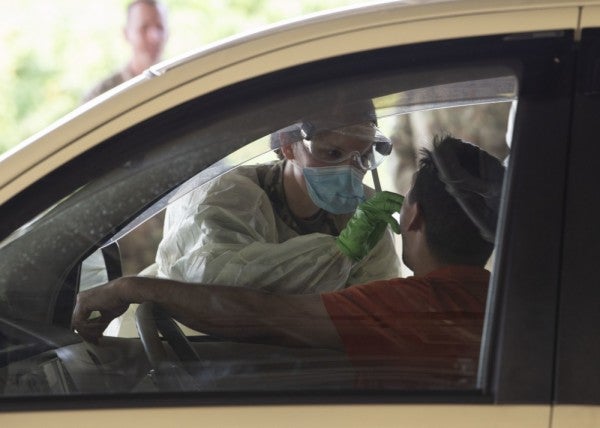 The U.S. military in Japan on Friday announced that all arriving Status of Forces Agreement (SOFA) personnel must undergo mandatory COVID-19 testing prior to release from 14 days of quarantine.

The shift in policy comes amid an ongoing outbreak at American bases in Okinawa Prefecture, where the U.S. Marine Corps reported another 41 coronavirus infections Friday, bringing the total infections among the military there to 201 since the July 4 weekend.

The latest cases included 27 at U.S. Marine Corps Air Station Futenma in the city of Ginowan and 14 at Camp Hansen in the town of Kin.

As for the new testing requirement, U.S. Forces Japan said the policy, which took effect for those entering Japan from Friday, applies to all SOFA-status personnel, including military, civilians, families and contractors, upon arrival in the country.

Prior to the new policy, SOFA personnel were required to spend a two-week quarantine period before and after directly entering U.S. bases in Japan aboard military aircraft, chartered planes or other transportation, but did not undergo testing unless they exhibited symptoms of the deadly virus.

Friday’s statement said that personnel arriving at commercial entry points “will continue to undergo tests at their point of entry, as provided by … Japan.”

Related: Dozens of COVID-19 infections detected at US military facilities in Japan

The U.S. military in Okinawa has moved to become more transparent in releasing information on the outbreak, after Tokyo and the prefectural government pressed for more openness amid the surge in cases on the island.

“Slowing the spread of COVID-19 is critical, and leaders at every level within USFJ take this effort very seriously,” said Col. Robert Firman, Director of Public Affairs for U.S. Forces Japan. “This policy update adds another layer of protection for U.S. forces and our Japanese neighbors, and we will continue to be as transparent as possible as we confront this challenge together.”

The Marine Corps Installations Pacific, which oversees Marines on Okinawa, said that all of the 41 cases announced Friday had been identified via its trace and test process after others had tested positive for the virus

All of those who tested positive have been moved into isolation, the Marines said, adding that it was continuing to test “large groups of individuals and have been re-testing many” already under quarantine.

The Marine Corps is continuing to prohibit off-base activity for all installations across Okinawa, except for essential needs approved by a commanding officer.

After having drawn attention earlier to “several problems” with the U.S. military’s handling of the outbreak, Defense Minister Taro Kono lauded its representatives Tuesday for “working hard to alleviate worries among residents of (base-hosting) local communities.”

Related: Japan furious at US for COVID-19 outbreak at Marine bases, says US not taking the virus seriously

Earlier this month, U.S. Forces Japan again extended a nationwide so-called Public Health Emergency in response to the pandemic. The emergency had been due to end July 14 but will now run through Aug. 13. The declaration was first issued April 15, after an initial order covering only the Kanto region.

Okinawa hosts the bulk of U.S. military forces in the nation. While Tokyo regularly touts the importance of Japan’s security alliance with the United States, many Okinawans associate the bases with a range of problems, including crime and accidents.

Some 50,000 U.S. troops and about as many family members reside in Japan.