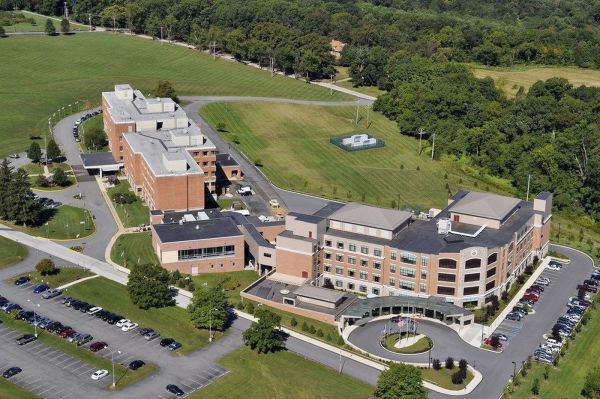 Almost every day over the last two weeks, military veterans and their spouses have been dying at a top-rated, state-run nursing home in Chester County ravaged by the coronavirus.

The death toll nearly tripled over a five-day period at the sprawling, 283-bed Southeastern Veterans’ Center complex in a wooded stretch of East Vincent Township, near the Schuylkill. As of Friday, 26 residents who had tested positive for COVID-19 or were presumed to be infected have died, according to the Chester County coroner.

Bean, a clinical social worker, said families as a whole have been happy with their loved ones’ care, and the staff amenities at the five-star nursing home, which has a waiting list and is run by the Pennsylvania Department of Military and Veterans Affairs. But as the state agency scrambles to contain the coronavirus, the nursing home has concealed the true scope of the deaths and outbreak from vet center families.

“They’ve given everything,” Bean said of her father-in-law and other veterans, “and to think it’s spreading through there and they are dying alone, that makes me utterly mad. It’s inhumane. And they’re withholding information about how dire it is.”

Interviews with nursing-home staff and residents’ families over the last week paint a grim picture of Southeastern Veterans’ Center, one of six state-owned veterans nursing homes, and show that even highly regarded facilities can be unprepared and devastated by the novel scourge.

National Guard staff are working in food service, maintenance, and patient care. A nearby Veterans Affairs medical center has sent body bags, according to an internal report.

“It’s like a sinking ship,” said one staffer, who is not authorized to speak to the media. “People are dying every day. It’s sad.”

Reached by phone Thursday, Commandant Rohan Blackwood, the top official at SEVC, said he would call back shortly to answer questions. Instead, he referred the reporter to a spokesperson from the DMVA, who did not respond to requests over two days for information about the conditions and deaths at the facility.

About half of Pennsylvania’s known coronavirus-related deaths have been residents of long-term-care facilities. The state has one of the oldest populations in the country, and about 126,000 people living in nursing homes and assisted-living facilities. Nationally, at least 10,000 nursing home residents have died, according to published reports.

Family members, who normally visit the veterans home and see how loved ones are faring and if sufficient staff is on duty, have been in the dark with no recourse.

Frustrated and desperate to help her father-in-law, Bean said her family considered taking him out of SEVC, at least temporarily, due to the pandemic. But a staffer warned her brother-in-law that his father could have a hard time getting back in, she said.

“They said if Pop leaves, not only does he lose his room, we would have to apply all over again. They will not even put him on a waiting list,” Bean said. “I consider that a veiled threat. Like, ‘Don’t you take him out.’ ”

States such as New Jersey, New York, and California make public the names of nursing homes and their number of positive cases and deaths due to the coronavirus, which often can be how families and elected officials first learn about outbreaks and the challenges the facilities are facing.

Pennsylvania does not do so, and some public health officials, such as Philadelphia’s health commissioner, Thomas Farley, oppose such public disclosures, saying naming a facility might make it less likely to cooperate with government efforts to control the pandemic.

But several residents at SEVC and their family members said they want more and quicker information about what is going on inside the home. Some first learned the home had its first coronavirus death from an Inquirer report published April 17 that revealed 10 residents died of COVID-19.

One veteran, who repeatedly asked nursing staff whether the virus was spreading there, was “absolutely floored” to read that 10 residents had died, his son said. “He knew nothing.” (The son asked not to be identified to protect his father from any retribution.)

The next day, the home’s social services director, in an email to relatives, said only that there are “several positive cases of COVID-19 in our building.” She did not mention that anyone had died. Since that April 18 message, at least 16 more people have died from the coronavirus at the facility, according to Chester County Coroner Christina VandePol.

On March 12, the state barred visitors at the six veterans nursing homes run by the DMVA. But over the next six weeks, the Southeastern Veterans’ Center would become one of the worst coronavirus clusters in the Philadelphia region, overwhelming and infecting staff, putting dozens out on leave, including key personnel.

The daughter of a veteran who contracted the virus in early April reached out to staff to cancel his “do not resuscitate” order — put in place long before the pandemic — so that, if necessary, he could be put on a ventilator to help him breathe and possibly survive.

But after a rough few days, he started to improve, and they visited over a video call, arranged by a social worker. Together they sang his favorite Frank Sinatra songs.

“I asked for them to have a nurse or a doctor call me,” she said of her effort to change her father’s “do not resuscitate” order.

“No one did, until the nurse left me a message to call her back,” said the woman, who spoke only on the condition that her name not be used. “I assumed it was about my dad, about his condition. But, it was because he died.”

Fran McDermott, whose 91-year-old mother, Josephine McKeon, moved into the nursing home four years ago, usually felt reassured by the regular updates she got from staff members and nurses about her mother’s health. In a recent phone call with her mother, she was alarmed to learn that two of her roommates were sick and being treated with oxygen.

Although an April 4 letter to families alerted them that “one or more of our residents developed COVID-19,” McDemott’s telephone call was the first she’d learned that the outbreak may have spread so close to her mother.

Do my mother’s roommates have coronavirus? she said she asked supervisors at the facility.

McDermott, who lives in Bucks County, said: “I’ve always thought they were so good about communicating.If she gets a cold, they’ll call me before they give her a Tylenol.”

On Wednesday, one of her mother’s roommates died, McDermott said.

Her mother has not shown symptoms, she said, but lives on a floor with others who are presumed positive for COVID-19. She fears it’s only a matter of time before she also gets sick.

“I asked them, why wasn’t she moved?” McDermott said. “Are they just waiting for her to get it?”

State Sen. Katie Muth, whose district covers parts of Chester County, said that until recently she’d never heard complaints about the veterans center, considered one of the best in the state and rated “much above average” by the federal government. Now she is unable to find out what is happening inside.

She said she hopes SEVC and other nursing homes get better access to COVID-19 testing and adopt a more aggressive approach to contact tracing when it comes to nursing home staff, some of whom work second jobs at other health-care facilities, which could inadvertently lead to spreading the virus.

As of last week, SEVC, in consultation with the Chester County Department of Health, had stopped coronavirus testing in units where two or more residents have tested positive. Instead, the facility would treat other residents who showed fevers and other symptoms of the virus as probable cases, according to an internal report obtained by The Inquirer.

Muth said that does a disservice to those who might not be infected. “They deserve a test, right? And they’re not getting them because we’re rationing tests,” Muth said. “If we’re not going to test everyone on a floor, it just looks like these people are sacrificial lambs.”

In recent days, more extensive testing at SEVC appears to have resumed, a staffer said Friday.

Last week, the federal government issued new rules that long-term care facilities must inform “all residents and their families when there are cases of coronavirus in the home.” They have not yet gone into effect.

“Now more than ever, nursing home residents and their family members have a right to know what is going on in these facilities,” said Seema Verma, administrator of the federal Centers for Medicare & Medicaid Services.

» HELP US REPORT: Are you a health care worker, medical provider, government worker, patient, frontline worker or other expert? We want to hear from you.

Zach Shamberg, president and CEO of the Pennsylvania Health Care Association, which advocates for elderly residents and their care providers, said his group has encouraged facilities to alert staff, residents and family members about positive cases in the facility.

“This level of communication is critical,” Shamberg said. “We believe in full transparency.”

Shamberg’s industry group is also pushing for a single reporting database, where the information could be disseminated to state and federal departments, and to the public. That information, he said, could identify facilities most in need of personal protective equipment, testing, and emergency funding.

Peter Shenkle said he appreciated how hard the staff was working during the pandemic, caring for his father, George A. Shenkle Jr. A paratrooper who jumped out of a plane on D-Day, he was wounded in the Battle of the Bulge, and awarded a Purple Heart. Despite a heart condition, he traveled to France last year and sat behind President Donald Trump at a 75th anniversary of D-Day ceremony.

After his 98-year-old father caught the virus, Shenkle said, the staff treated the veteran with compassion and respect, and kept the family informed.

Shenkle said three weeks ago the staff told him his father had a fever and was diagnosed with pneumonia, then checked for the coronavirus. After he tested positive, he was moved to a room with another resident with the virus. His father had a “do not resuscitate” order in place, so he was treated with oxygen and pain medication, his son said.

Two days before he died, a staff member put the father and son together on the phone, using a cell phone in a baggie.

“We had a couple of really beautiful moments talking,” Shenkle said. “I’m thankful that he didn’t linger for long, and that they were able to keep him comfortable.”

Ian Horowitz’s experience with SEVC shows the difference having information can make when you cannot visit a loved one in the nursing home.

He complained that for some time he couldn’t get information about the perils his 81-year-old father, a former military police officer, faced at the home. “They are being so vague and secret it’s ridiculous,” he fumed in an earlier interview.

But then on Thursday, after the state agency and the commandant were pressed by reporters about the complaints by families, the nursing home appeared to finally be reaching out to worried family members.

A staffer called and assured him that if anyone tests positive on his father’s floor, he will be moved to another floor.

“It’s got to be really tough for everyone there and I very much appreciate her contacting me and being more transparent, which is all I’ve been asking for,” Horowitz said of that simple gesture.

“It’s a big step in the right direction.”