The top U.S. oversight official in Afghanistan said Tuesday he has launched a criminal probe into why the Pentagon may... 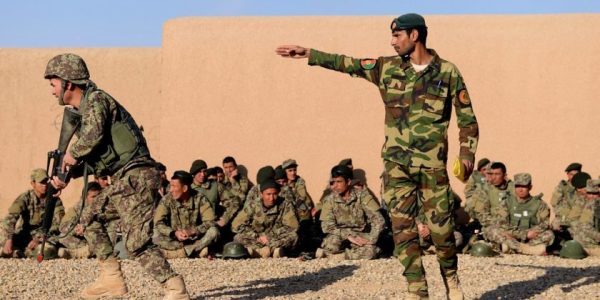 The top U.S. oversight official in Afghanistan said Tuesday he has launched a criminal probe into why the Pentagon may have wasted up to $28 million on pricey forest-camouflage uniforms for Afghan troops who operate in a largely desert environment.

“This … procurement demonstrates what happens when people in the government don’t follow the rules,” John Sopko, the Special Inspector General for Afghanistan Reconstruction, told a House Armed Services subcommittee Tuesday. “These problems are serious. They are so serious that we started a criminal investigation related to the procurement of the (Afghan National Army) uniforms.”

According to the special IG, the military bought more expensive, proprietary “woodland patterns” for the Afghan National Army uniforms instead of using the Defense Department’s own patterns for free, even though only 2.1 percent of the country’s total land area is covered with forest.

The withering 17-page report released by his office has become an outlet for military leaders, government watchdogs and lawmakers to vent about everything from government waste to accountability and larger issues in the ongoing, expensive 16-year war.

“Given the pressures on the budget of the Department of Defense, every dollar counts,” said Rep. Vicky Hartzler, R-Mo., who chairs the oversight and investigations panel. “We cannot afford to make avoidable mistakes.”

Although the Pentagon often pushes back on the special inspector general’s reports, Secretary of Defense Jim Mattis took the unusual step of condemning the bureaucracy of his Defense Department for such “cavalier” spending.

“Cavalier or casually acquiescent decisions to spend taxpayer dollars in an ineffective and wasteful manner are not to recur,” Mattis wrote in in a memo dated July 21, which was addressed to the department’s undersecretaries for acquisition, policy and comptroller. “Buying uniforms for our Afghan partners, and doing so in a way that may have wasted tens of millions of taxpayer dollars over a 10-year period, must not be seen as inconsequential.”

The IG’s report implied that the U.S. command acquired the designs for the dark green uniforms from a private contractor based on a whim from the Afghan defense ministry. Overall, the Pentagon spent about $94 million from 2008 to 2017 to buy 1.3 million uniforms and 88,010 extra pairs of pants in the proprietary camouflage for Afghan troops, according to the special inspector general. Some of the uniforms’ other features — including zippers instead of buttons, hook and loop fasteners and additional pockets — made them more difficult and expensive to produce.

There was never a formal assessment, and as a result “neither DOD nor the Afghan government knows whether the (Afghan National Army) uniform is appropriate to the Afghan environment, or whether it actually hinders their operations by providing a more clearly visible target to the enemy,” the review states.

The top Democrat on the Senate’s Homeland Security Committee has demanded answers from the military by Aug. 4. In a letter to the acting undersecretary for policy, Robert Karem, Sen. Claire McCaskill, D-Mo., said the Pentagon may have violated federal procurement law.

“This is a contracting decision that makes you smack your head in frustration,” she said Monday. “It’s a prime example of wasting hard-earned taxpayer dollars, and we’ve got to get to the bottom of how this happened.”

Changing the uniforms used by Afghan troops “could save U.S. taxpayers between $68.61 million and $72.21 million over the next 10 years,” SIGAR says.

The special inspector general for Afghanistan also used the opportunity of the hearing to point to what he sees as a larger problem of personnel rotation and change.

“We have what we call in Afghanistan the annual lobotomy, where every year we change everybody out … they don’t even know where the latrine is by the time they leave,” Sopko told the House subcommittee Tuesday, adding that he has gone through eight to 10 commanders. “There’s no accountability. People are not being held accountable for wasting money.”

A former federal prosecutor, Sopko’s aggressive approach to oversight has come under scrutiny in recent years.

He told McClatchy that he didn’t know why this particular report had attracted so much attention, but it could be because the unnecessary waste of money on the wrong uniforms is easy for everyone to understand.

“This was just a forehead-slapper — ‘You never showed them the free stuff?’ The average Joe or Jane says, ‘Who does that?’” he said.