The Pentagon is recruiting a new cadre of computer geeks to address a threat that the military's top intelligence officer says keeps him up at night. 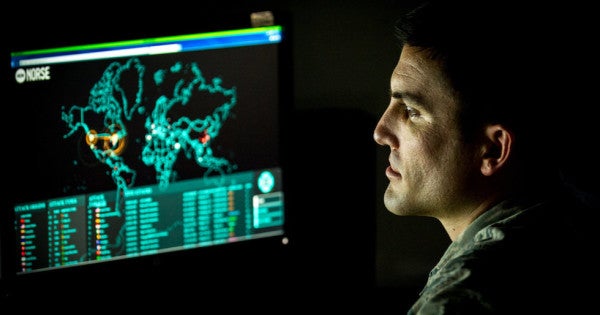 ASPEN — The Pentagon is recruiting a new cadre of computer geeks to address a threat that the military's top intelligence officer says keeps him up at night.

At the Aspen Security Forum, Pentagon leaders and industry chiefs said the biggest arms race that America faces might be in cyberspace, where even smaller nations such as North Korea and Iran could bring havoc to U.S. soil. The annual forum draws security experts from around America and the globe to address threats and policy conundrums during a three-day confab.

The big topic Friday was how America could be losing its lead in computer warfare.

“When people ask me what keeps you up at night, that is kind of the thing that keeps me up at night,” admitted Defense Intelligence Agency boss Army Lt. Gen. Robert Ashley.

America, the world's most computer-dependent nation, is especially vulnerable to cyber attack. From power grids to new refrigerators, America relies on internet-connected devices that could become the first targets in a new war.

“The internet of things creates a degree of vulnerability for all the things that are connected to it,” Ashley said.

The fear of cyber attack has driven the Pentagon to Silicon Valley, where the brass is wooing internet giants and startups that could help the military defend itself.

“If we want the military to have access to that we have to reach out and bring that technology into the military,” explained Tony Brown, who heads the Pentagon's Defense Innovation Unit, which is trying to bring troops the best that America's tech industry can muster.

Edward Screven, chief architect for tech giant Oracle, said the military is facing what many businesses have struggled with: battling 21st-century problems with 20th-century technology infrastructure.

With so many systems scattered around the military's vast holdings, the Pentagon is left with too many things to defend from cyber attack, he said.

Screven is pushing for the Pentagon to move to cloud computing, a tactic that corporate America has embraced that moves computing to centralized systems that are easier to defend.

The military faces problems beyond hardware and software in its fight to win cyber battles. A top issue is getting the right people for the fight.

In recruiting cyber warriors, the military is up against an industry that is desperate for people with the same skills, and willing to issue massive paychecks.

Borwn said the military is used to bringing in soldiers for long careers and civilian workers for a lifetime. In addition to the relatively low pay the government offers, young workers are also turned off by the lack of change, Brown said.

“That is just not the way the workforce is working today,” he said.

Now, Brown's office is mulling partnerships with industry, which would put young talent in uniform for a few years before sending them off to guaranteed high-tech civilian jobs.

The desperation for computer troops comes as the cyber landscape is predicted to change.

Artificial intelligence will rule battlefields, with quantum computers with mind-blowing processing power tracking the fight and controlling a military increasingly reliant on drones.

Ashley said the Defense Intelligence Agency is figuring out ways to use the new technology. The agency is investing in an intelligence monitoring system that uses artificial intelligence to sift through massive data files to come up with needed intelligence.