Dakota Meyer explains why he hates his Medal of Honor

"No matter how you look at it: I'm here; my teammates are dead." 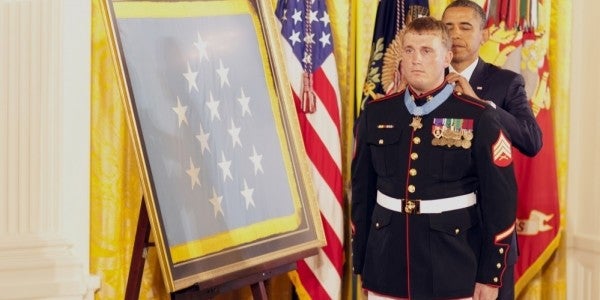 Receiving the Medal of Honor is the worst thing that ever happen to former Marine Sgt. Dakota Meyer, he told the military podcast Zero Blog Thirty.

In September 2011, Meyer became the first living Marine to receive the Medal of Honor since the Vietnam War. When his team was ambushed by more than 50 Taliban fighters, Meyer braved intense enemy fire to save 36 U.S. and Afghan troops.

Yet in an interview Thursday with the podcast, Meyer said he still blames himself for not being able to reach four Marines trapped by enemy fire sooner. It took him five attempts to fight through the ambush to reach the Marines, who were dead when he arrived.

Meyer refuses to wear his Medal of Honor because it represents the worst day of his life, he told the podcast, which is presented by Barstool Sports.

“No matter how you look at it: I'm here; my teammates are dead,” Meyer said. “That's hard enough, but now I get this award to live and face to the nation – to be a hero when it's the biggest failure of my life. It's the most mind f**king thing ever. I look at that medal and I could throw up. I hate it. I resent it. I refuse to tell anybody that I am a Medal of Honor recipient. I hate it. I f**king hate it.”

You can listen to the entire interview here

SEE ALSO: Dakota Meyer On Why Trump Is Wrong To Ban Muslims

WATCH NEXT: Mattis In Kabul