Former Navy TOPGUN instructor: AI that beat human pilot in simulated dogfight would have ‘crashed and burned’ in real world

An artificial intelligence algorithm absolutely destroyed a seasoned U.S. fighter pilot last week in a simulated dogfight, a result some observers say was to be expected 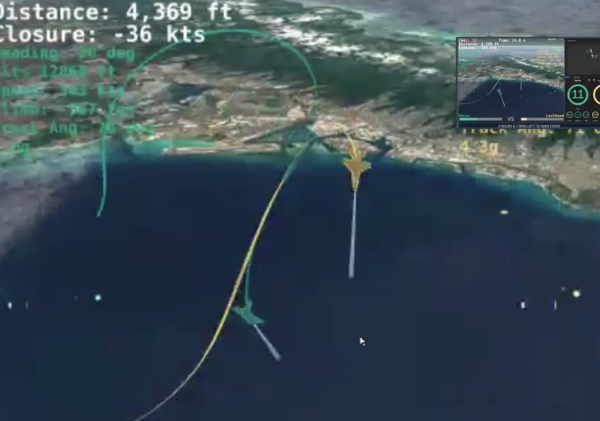 An artificial intelligence algorithm absolutely destroyed a seasoned U.S. fighter pilot last week in a simulated dogfight, a result some observers say was to be expected.

“I was not surprised by that outcome,” Guy 'Bus' Snodgrass, a former US Navy pilot and TOPGUN instructor, told Insider, arguing that the set-up of the engagement gave the AI an advantage. John “JV” Venable, a former U.S. Air Force F-16 pilot, said the same.

The Defense Advanced Research Projects Agency (DARPA) held the last round of its third and final AlphaDogfight competition Thursday, putting an AI system designed by Heron Systems against a human pilot in a “simulated within-visual-range air combat” situation.

The AI algorithm achieved a flawless victory, taking home five straight wins without the human pilot — an experienced Air Force pilot with the callsign “Banger” who's a graduate of Weapons Instructor Course — ever scoring a hit.

With advancements in air combat capabilities, there have long been questions about whether dogfighting even matters. Both Venable and Snodgrass said it remains relevant because pilots have to be prepared to dogfight should their standoff capabilities to fire long-range missiles be neutralized.

“In a best case scenario, dogfighting is completely irrelevant because you want to see your adversary as far away as possible,” Snodgrass explained. But sometimes pilots are unable to defeat their opponent before they find themselves in close combat.

“Now, you're left to a bullet,” Venable said.

'Gamed to a point where you can't beat it'

Theresa Hitchens at Breaking Defense characterized the recent simulated engagement as a “one-on-one combat scenario” in which combatants fired “forward guns in a classic, WWII-style dogfight,” suggesting that it mimicked certain aspects of close combat. That being said, the contest was not necessarily a fair or realistic fight.

“This was gamed to a point where you can't beat it,” Venable said, arguing that the AI algorithm appears to have had access to information that it would not have in the real world. What's more, the combat environment was largely built to the AI's advantage, as Snodgrass pointed out.

“You have an artificial intelligence program that has been perfectly trained in that environment to conduct a simulated fight, and you have a U.S. Air Force fighter pilot who you are forcing to wear VR goggles,” Snodgrass said, saying that the human is “playing the AI's game.”

With a background in computer science and experience with some of the Department of Defense's AI research, he explained that “if you give [AI] a very narrow, specific job to accomplish, once it's been trained, once it has had exposure to a very static environment, it does phenomenally well.”

“You find that artificial intelligence can begin to outperform human operators in short order,” he added.

Where AI struggles is when it is put in a complex environment with unconstrained variables and asked to think and act like a human being. “We're nowhere near that,” Snodgrass said.

“The AlphaDogfight trials were a significant step toward one day providing an unmanned aircraft that can perform dogfighting,” the retired Navy commander said, “but what it does not demonstrate is that we're there now.”

“I think it's promising for the development of artificial intelligence,” he added, “but if you took that same algorithm, put it into an unmanned vehicle and said, 'Okay, go fight a real dogfight,' it would have crashed and burned pretty quick.”

A mission-capable AI-driven autonomous combat aircraft is possible in the not-too-distant future though, he and Venable told Insider.

The ACE program, according to DARPA, is designed to “deliver a capability that enables a pilot to attend to a broader, more global air command mission while their aircraft and teamed unmanned systems are engaged in individual tactics.”

Col. Dan Javorsek, the program manager in DARPA's Strategic Technology Office, said last year that the agency envisions “a future in which AI handles the split-second maneuvering during within-visual-range dogfights, keeping pilots safer and more effective as they orchestrate large numbers of unmanned systems into a web of overwhelming combat effects.”

The agency's research is aimed at delivering advanced manned-unmanned teaming both inside and outside the cockpit, and DARPA is just one of several teams looking at these capabilities for the U.S. military.

“When you think about all the advancements that have occurred in the last decade, in the last hundred years, I would never bet against technological progress,” Snodgrass said.

“I think there's a point in time where the U.S. military will have unmanned aircraft that you could give a mission, load it up, have it take off, and have it potentially fight its way in and fight its way back out,” he added. “That's absolutely possible and something likely to happen probably sooner than we ever imagined.”

But developing the technology is only part of the process of fielding new warfighting capabilities. The technology also has to be accepted and trusted by pilots.

“The recent 5 to 0 victory of an Artificial Intelligence (AI) pilot developed by Heron Systems over an Air Force F-16 human pilot does not have me scrambling to send out applications for a new job,” Navy Cmdr. Colin 'Farva' Price, a F/A-18 squadron commander, wrote in an article for The War Zone. “However, I was impressed by the AlphaDogfight trials and recognize its value in determining where the military can capitalize on AI applications.”

He expressed interest in AI-enhanced systems in an aircraft assisting and augmenting the combat capabilities of fighter pilots through machine learning, something the Air Force is already looking at.

Explaining that top US pilots have thousands of hours of experience during a 2018 interview with Inside Defense, Steven Rogers, the head of autonomy at the Air Force Research Laboratory, asked the question, “What happens if I can augment their ability with a system that can have literally millions of hours of training time?”

“I am not ready for Skynet to become self-aware,” Price wrote, referring to the evil AI enemy in the Terminator films, “but I am certainly ready to invite AI into the cockpit.”