Following a recent virtual dogfight between an artificial intelligence program and an F-16 Fighting Falcon pilot, the Pentagon is raising the stakes and will pit an AI-controlled jet against a fighter pilot in a real aerial battle, according to Defense Secretary Mark Esper 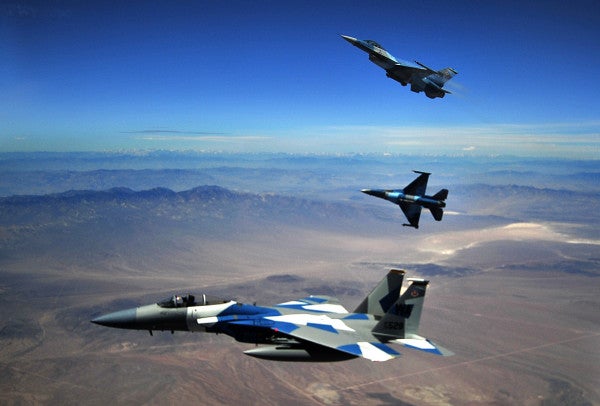 Following a recent virtual dogfight between an artificial intelligence program and an F-16 Fighting Falcon pilot, the Pentagon is raising the stakes and will pit an AI-controlled jet against a fighter pilot in a real aerial battle, according to Defense Secretary Mark Esper.

Speaking during the Defense Department's AI Symposium 2020 on Wednesday, Esper championed the “tectonic impact of machine learning on the future of warfighting” after the AI algorithm beat the human pilot during a simulated dogfight hosted by the Defense Advanced Research Projects Agency last month.

“The AI agent's resounding victory demonstrated the ability of advanced algorithms to outperform humans in virtual dogfights,” he said, per prepared remarks. “These simulations will culminate in a real-world competition involving full-scale tactical aircraft in 2024.”

During last month's AlphaDogfight challenge, Maryland-based Heron Systems came in first place among eight companies who pitted their simulated aircraft against one another over two days. On the third day, Heron's system beat an F-16 pilot “in five straight simulated dogfights in the man-vs-machine finale,” DARPA said following the finals.

The AI aircraft used confrontational moves during the simulation, officials said, such as flying directly at the other jet without letting up until the last possible second — a high-stakes game of chicken. But such maneuvers go beyond the scope of how human pilots train to face off at the elite Air Force Weapons School — the service's version of Top Gun — at Nellis Air Force Base, Nevada, according to Col. Dan “Animal” Javorsek, DARPA program manager for the event and a former F-16 pilot.

While Esper provided no additional details on the upcoming face-off, he reassured troops that AI is meant to be an additive for warfighting, not a replacement.

“We see AI as a tool to free up resources, time and manpower so our people can focus on higher-priority tasks and arrive at the decision point, whether in a lab or on the battlefield, faster and more precise than the competition,” he said.

Pentagon officials note that China is a primary competitor in the AI field. It has made massive investments in artificial intelligence technologies over the last five years, harnessing several “smart cities” in a military-civilian partnership to understand how AI can be propagated for everyday use.

On Wednesday, Esper referenced China's ambition to become the global leader in AI and to prevail as a “digital police state — unencumbered by privacy laws or ethical governing principles.”

“As China scales this technology, we fully expect it to sell these capabilities abroad, enabling other autocratic governments to move toward a new era of digital authoritarianism,” he said.

By contrast, earlier this year, the Pentagon vowed that, if it cannot use artificial intelligence on the battlefield in an ethical or responsible way, it will simply not field it.

In February, Lt. Gen. Jack Shanahan, then director of the Joint Artificial Intelligence Center (JAIC), unveiled the Defense Department's new AI guidelines, including five main pillars for its principled use: to be responsible, equitable, traceable, reliable and governable.

“We will not field an algorithm until we are convinced it meets our level of performance and our standard, and if we don't believe it can be used in a safe and ethical manner, we won't field it,” Shanahan told reporters during a briefing at the time. He retired in August.

The guidelines will govern AI in both combat and noncombat functions. The recommendations came after 15 months of consultation with commercial, academic and government AI experts, as well as the Defense Innovation Board and the JAIC. The DIB, which is chaired by former Google CEO Eric Schmidt, made the recommendations last October.

While Shanahan stressed that the U.S. should be aggressive in its efforts to harness accurate data to stay ahead, he said it will not go down the same path of China and Russia as they neglect the principles that dictate how AI should be used.

Instead, the steps put in place by the Pentagon can hold someone accountable for a bad action, he said.

“What I worry about with both countries is they move so fast that they're not adhering to what we would say are mandatory principles of AI adoption and integration,” Shanahan said.