"This was probably an easy kill for them ... This will push some of the production out to 2022." 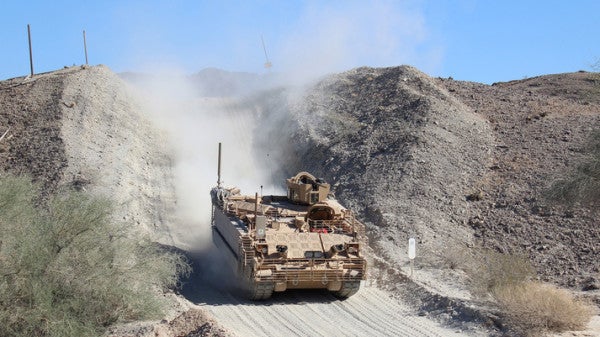 Production on the Army's newest armored vehicle would slow considerably in 2021 under a budget proposal unveiled by Pentagon officials this week.

But that doesn't necessarily mean Anniston Army Depot will see a delay in its work on the Armored Multipurpose Vehicle, an advocate for the depot said.

“I don't think it's going to affect the depot at all,” said Nathan Hill, military liaison for the Calhoun County Economic Development Council.

Hill spends much of his time lobbying Congress for more work at the depot, a military facility west of Anniston where workers repair and refurbish tanks, armored vehicles and small arms. The depot is Calhoun County's largest employer, even after rounds of layoffs that followed drawdowns in Iraq and Afghanistan nearly a decade ago.

The Pentagon announced last year that Anniston will become the repair depot for its newest armored vehicle, the Armored Multipurpose Vehicle or AMPV. Built by British-based contractor BAE, the AMPV is meant to replace the M113, a widely used armored vehicle that has been around since the 1960s.

The AMPV isn't expected in Anniston soon, but it's likely to create jobs at the depot in the 2030s, as the now-new vehicles wear down and need repair.

The Army originally planned to buy 143 AMPVs in 2021, according to Jane's Defence Weekly. This week, the Pentagon instead proposed buying 32 of them.

“This was probably an easy kill for them,” Hill said. “This will push some of the production out to 2022.”

Hill said that with the first AMPVs due in Anniston in seven or eight years, there's likely time for BAE to catch up on production. In 2018, Defense Secretary Mark Esper, at the time secretary of the Army, visited the York site after a report by a Defense Department agency suggested York might not able to support a surge in work, according to Stars and Stripes. The DoD report said York — located in eastern Pennsylvania between Harrisburg and Baltimore, Md. — may not have enough welding or machining capacity, or the ability to hire and train enough workers.

In an emailed statement to The Star Thursday night, a BAE official said the company was making “significant investments” that include “robotic welding technology that is already in use.”

The company is on contract to produce a total of more than 450 AMPVs, the statement read.