Hundreds of former defense, national security, and diplomatic officials have condemned Trump’s threat to send the military into US cities 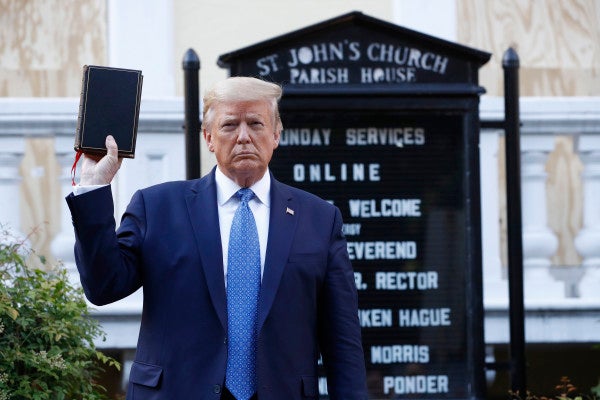 President Donald Trump has faced a significant backlash from hundreds of former defense leaders, national security officials, and diplomats troubled by a presidential threat that finally went too far, the threat to send the military into U.S. cities amid protests and nationwide unrest.

The death of George Floyd, a Black man who died after a white police officer knelt on his neck for nearly nine minutes, has sparked anger and ignited protests across the country in response to racial injustice and police brutality.

Trump said last Monday that if a city or state fails to take action to control the situation, “then I will deploy the United States military and quickly solve the problem for them,” suggesting that he might invoke the Insurrection Act.

Following that threat, the president, accompanied by Pentagon leaders, walked through an area that had been forcefully cleared of protesters for a photo op at a DC church near the White House.

His secretary of defense, who stood by his side as he made his comments in the Rose Garden, broke with the president days later, saying that the “option to use active-duty forces in a law enforcement role should only be used as a matter of last resort and only in the most urgent and dire of situations.”

Outraged, Trump was reportedly ready to fire Secretary of Defense Mark Esper, but advisers talked him out of it.

On Thursday, when asked about the possibility of the president sending in the military to quell unrest, White House spokesman Hogan Gidley told Fox News that “all options are on the table,” using rhetoric traditionally been reserved for US adversaries such as North Korea and Iran.

While Trump has backed away from his earlier threat — and many troops brought in to respond to unrest in DC have left — that he made such a threat at all seems to have been too much for hundreds of former senior defense, national security, intelligence, and diplomatic officials.

“Our country has a wise tradition of keeping the US military out of domestic law enforcement,” wrote a group of 38 retired US generals and admirals in an open letter Tuesday. “Like the deployment of troops abroad, their deployment at home should only be a last resort.”

In another critical letter, 58 retired generals and admirals wrote that last week that they “believe the President must reverse his destructive course immediately,” stressing that in a moment that “cries out for leadership,” “we have yet to receive that from President Trump — indeed, we have seen the opposite.”

Over 500 former senior officials, including many former U.S. ambassadors and State Department officials, argued in a separate letter that “the deployment of military forces against American citizens exercising their constitutional rights will not heal the divides in our society.”

Last Friday, 89 former defense officials, including four former defense secretaries and other leaders, wrote that they are “alarmed” by Trump's betrayal of his oath “to support and defend the Constitution of the United States” by “threatening to order members of the U.S. military to violate the rights of fellow Americans.”

In addition to the open letters, a number of prominent former military leaders have spoken out individually against the president for his militaristic response to protests and unrest.

“Donald Trump is the first president in my lifetime who does not try to unite the American people — does not even pretend to try. Instead, he tries to divide us,” James Mattis, a retired Marine general and Trump's former secretary of defense, said in a statement.

The comments from the former secretary of defense came amid other critical statements from former chairmen of the Joint Chiefs of Staff, people like retired Adm. Mike Mullen, retired Gen. Martin Dempsey, and retired Gen. Richard Myers, among other military leaders.