How A Defense Secretary Works: Inside The Turbulent Mind Of Donald Rumsfeld 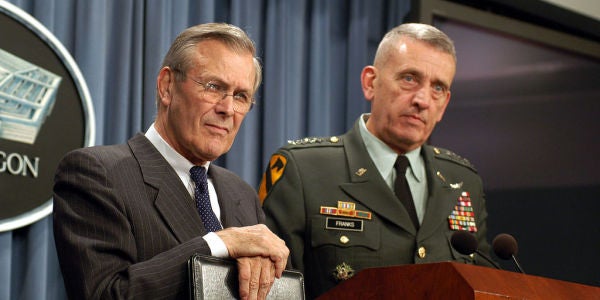 I spent a few hours on Wednesday reading through hundreds of memos just released by the National Security Archive that were written by Donald Rumsfeld in his first two years as President Bush’s defense secretary.

Some are just bizarre. (He wondered if he could get Jamie McIntyre, then of CNN, to throw a $100 bill at him during a press conference.) Some are petulant — he really dislikes the briefing papers given to him by the Joint Staff, and is mad when someone shows up late to a meeting. And he seems to spend an awful lot of time reading emails full of advice from Newt Gingrich, even on weird minor stuff like the state of the Pentagon library (Dec. 29, 2001).

But most of all what strikes me is how hard he was working to get his arms around the Pentagon, and even his own job. What committees and boards is he a member of by statute, he asks. Why does the Navy have so many medical officers? (No one really knows.) Where does all the money go? Who keeps track of it? Why don’t his assistants keep track of commitments he makes in meetings, especially on personnel matters? Why does he feel undermined by career bureaucrats? (See Nov. 29, 2001) Why does he always have to ask for his schedule? And what happened to his dentist appointment? (See Nov. 28, 2001)

We also see additional evidence that in December 2001, with Kabul taken, Rumsfeld turned his attention to Iraq. I mentioned this in my book Fiasco, but it is always good to see additional evidence. See, for example, the memo of Dec. 29, 2001, asking for background information on that country’s Kurdish and Shiite populations. On Christmas Day 2001, Gingrich was writing to Rumsfeld about the need to conduct war games involving Iraq. On Dec. 29, Rumsfeld told his top subordinates that he found Gingrich’s note “very interesting.”

Overall, I came away feeling a twinge of sympathy for Rumsfeld, whom I generally think was an awful secretary of defense — surprisingly slow on decision-making, and quite AWOL on Iraq after the summer of 2003.

Btw, if you want to search for your own name, go to the National Security Archive’s page and then click on the upper right hand corner, which offers a PDF that is much more friendly to search.