Payne will receive the Medal of Honor on Sept. 11. 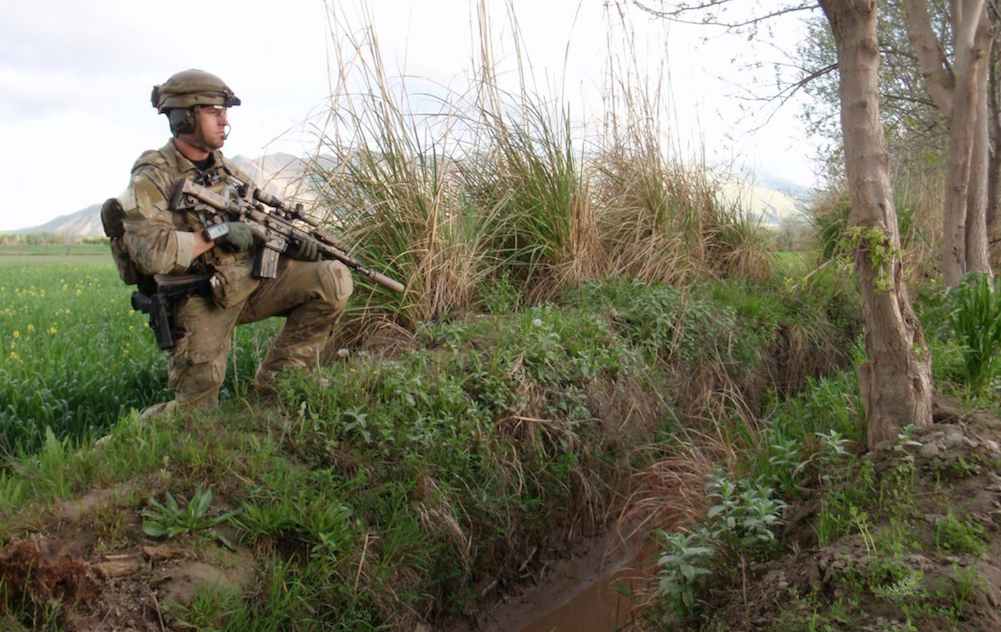 Seconds after U.S. military helicopters landed on their objective, Army commandos knew their mission to rescue 70 Islamic State-held hostages was off to a chaotic start.

“Ramp drops; it's complete brown-out, part of the compound was already in a pretty intense firefight,” Sgt. Maj. Thomas “Patrick” Payne recalled in a video interview released by the Army this month.

Then-Sgt. 1st Class Payne was the assistant team leader of a group of operators attached to 1st Special Forces Operational Detachment-Delta, which joined Kurdish commandos on a Oct. 22, 2015, nighttime raid to liberate Iraqi hostages from the ISIS prison compound in the northern town of Hawija.

Fierce close-quarters fighting during the raid claimed the life of Payne's teammate, Master Sgt. Joshua Wheeler, before the hostages were freed. For his actions that day, Payne will become the first living Delta Force member to receive the Medal of Honor, multiple sources confirmed to Military.com. Army officials have identified Payne as a Ranger, but they have not publicly confirmed his affiliation with the elite and highly secretive Delta Force.

Before the mission began, Payne's team spent an entire week planning and rehearsing, according to an Army account of the operation. The mission received a green light when intelligence showed the hostages' lives were in imminent danger.

“What was significant was, there were freshly dug graves, and if we didn't action this target, then the hostages would probably have been executed,” Payne said in the video interview.

Payne's team was responsible for clearing one of the buildings in the compound.

“As we maneuvered to the building, we threw up the ladders,” Payne said. “The other part of my team went over to their blocking position; that's when we heard that there was a man down, and it was Master Sgt. Josh Wheeler.”

The momentum stalled briefly when Kurdish forces hesitated at the breach point of the building.

“That's when one of my teammates looked them right in the eye and said, 'follow me,'” Payne said. “We cut the locks on the prison doors and opened the cell.

“There were over 25 hostages in one cell and probably 11 in the other and you see their faces light up and they are being liberated.”

But the fight was far from over, Payne recalled, his demeanor calm and almost gentle.

“While all this was going on, there is still an intense firefight that went on in another building,” he said. “You can see the flames, you hear all the explosions going on. And you hear on the radio an urgent call for assistance. And that's when I looked at a teammate and said, 'hey, let's get into the fight. Let's go.”

Payne's team quickly moved the rooftop of the other building while taking heavy fire from the west as well as directly below.

At that moment, a suicide bomber triggered his explosive vest, unleashing a blast below Payne's team that shook the building, Payne said.

The team quickly moved under heavy fire to ground level and breached windows and walls to enter the building's first floor. Once inside, the fighting was intense and commandos began taking casualties.

“One of the teams was holding down the breach point all the way down to their last magazine,” Payne said. “Bullets were passing through their uniforms.”

The locks on the prison door had to be cut. Payne knew he would be exposed to enemy gunfire, but that didn't stop him from moving into the fray.

“I called for a set of bolt-cutters and the sergeant major was like, 'hey, I got you,'” Payne said. “They began engaging the enemy combatants in the back room.”

Payne maneuvered his way into a small foyer and cut the top lock, but the smoke and heavy enemy fire forced him back, he said.

Kurdish forces tried to cut the second lock but failed, so Payne decided to go back into harm's way.

“I took the bolt cutters back; it was difficult to breathe, smoke pouring out and it's hot,” Payne said. “I was able to cut that bottom lock.”

As Payne's teammates rushed forward, a call came over the radio for a mandatory evacuation because the building was beginning to collapse.

“We are getting shot at, it's on fire and we have hostages inside. And it was a mandatory evacuation call,” Payne remembered.

“So my sergeant major is pulling the guys from one of the rooms, and I am like a third-base coach waving them through the initial breach point, and I snatch an ISIS flag off the wall [and] stuff it in my pocket.”

The line of hostages briefly stopped, so Payne grabbed one of them and started moving through the breach point to get them moving again.

“I went back into the building and noticed that one of the hostages … had basically given up on life,” Payne said. “He was over 200 pounds, a big fellow, so I basically grabbed him by the back of the collar and drug him through the breach point.”

Payne ran back into the building a third time for one last check. Then he came back out and gave the last-man call to his teammates.

Under heavy fire, Payne and the other commandos then formed a human wall so the hostages in the other building could run behind them and board the extraction helicopters.

Payne and his teammates did not hear what happened to Wheeler, who had been wounded on the raid, until they safely landed.

“The sergeant major pulls us in, and he informed us that Master Sgt. Josh Wheeler had been killed in action. And that's when our teammates tell us what Josh Wheeler did that day,” Payne said.

Early on, Wheeler and his team were caught in a deadly crossfire. Wheeler didn't hesitate to move forward under heavy fire, leading his men toward their objective, Payne said.

“His last words before moving to the sound of the guns were, 'on me,'” Payne said.

A source confirmed to Military.com that Wheeler received the Silver Star for his heroism.

The heroic deeds of Delta Force operators often go untold. Army Special Operations Command will not confirm that Payne, or Wheeler, were assigned to the Fort Bragg, North Carolina-based Delta Force. The Army describes Payne's career as beginning when he enlisted in 2002 as an infantryman. He was selected to serve in 1st Battalion, 75th Ranger Regiment in 2003, officials said.

Payne served as a sniper and sniper team leader in the 75th until November 2007, when he was “selected for assignment to the U.S. Army Special Operations Command at Fort Bragg,” according to his biography information on a special, Army Medal of Honor webpage.

But two sources, who have served in Army special operations units and know Payne personally, confirmed to Military.com that Payne, like Wheeler, is a respected member of Delta Force.

On Sept. 11, the 19th anniversary of the 2001 terrorist attacks, Payne will become the first living member of Delta Force to receive the nation's highest award for valor, according to the two sources that have knowledge of Delta's history.

Doug Sterner, a military awards expert who runs the Hall of Valor Project database, confirmed that Payne will be the third Delta member in history to be selected to receive the Medal of Honor.

Delta Force was formed in 1977. Two other Delta members were posthumously awarded the Medal of Honor in 1994, for their heroism during the October 3, 1993, Battle in Mogadishu in Somalia. Those Medals of Honor, for the mission that would become famous for its portrayal in the Book and film “Black Hawk Down,” were the first awarded in any conflict after the Vietnam War, Sterner said.

So far, 18 Medals of Honor have been awarded since the end of the Vietnam War to members of the U.S. Army, Sterner said.

Payne's Medal of Honor will make the count 19, three of them for Delta Force.

“That's a significant portion, 20% to an element that comprises less than 1% of the U.S. military,” Sterner said.

Payne has not talked about his connection to Delta, but said he views the Medal of Honor as a sacred responsibility as a tribute to fallen heroes.