A coalition of Democratic lawmakers is backing a veteran activist organization's efforts to end the "forever wars" in Afghanistan and Iraq, among other global hot spots, and finally bring U.S. troops home. 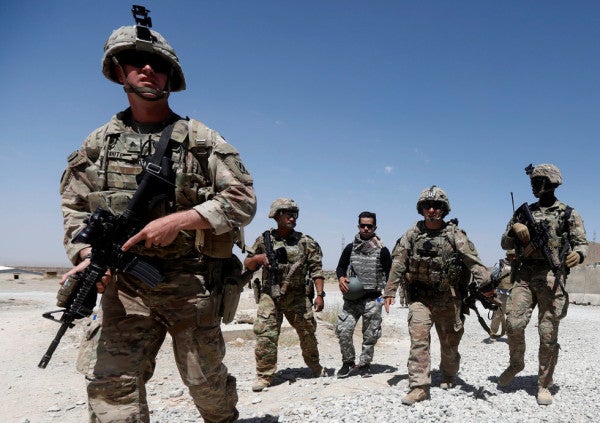 A coalition of Democratic lawmakers is backing a veteran activist organization's efforts to end the “forever wars” in Afghanistan and Iraq, among other global hot spots, and finally bring U.S. troops home.

Common Defense, a grassroots group comprised of veterans and military families that stood up after the 2016 election, has secured sponsorship from lawmakers and presidential hopefuls such as Sen. Bernie Sanders.

“American troops have been in Afghanistan for nearly 18 years, the longest war in American history,” said Sanders, an independent lawmaker from Vermont.

“Our troops have been in Iraq since 2003, and in Syria since 2015, and many other places,” he told Military.com in a statement. “The American people do not want endless war. It is long past time for Congress to reassert its constitutional authority over the use of force, to responsibly end these interventions and bring our troops home. It is time to end the Forever War.”

The initiative mirrors President Donald Trump's vision to reduce the U.S. troop presence in Afghanistan and instead focus on counterterrorism and peace negotiations with a smaller footprint in the region.

In his State of the Union address last month, Trump highlighted the need to pull out of Afghanistan. “Great nations do not fight endless wars,” he said.

After Trump announced a complete withdrawal of the roughly 2,000 U.S. troops in Syria in December, Pentagon officials confirmed last month that a small presence of roughly 400 troops would stay in the country to assist with security and prevent an Islamic State resurgence.

Alexander McCoy, political director for Common Defense, told Military.com on Monday he agrees with the president's thinking, but not at the expense of perpetuating other conflicts around the world.

“Trump has realized something too many elected representatives have not, that the American people are overwhelmingly tired of these wars, their spiraling human and monetary cost, and the utter lack of a strategy or purpose behind them,” he said.

But “Trump has pretended to wind down the wars while simultaneously escalating conflicts around the globe and threatening to suck us into new ones with Iran, North Korea and Venezuela. We need a speedy, but responsible end to the Forever War,” said McCoy, a former sergeant who served in the Marine Corpsfor six years and deployed as an embassy guard to Saudi Arabia, Honduras and Germany.

McCoy said U.S. leaders should not be orchestrating plans “for how to keep the conflicts going” in countries including Afghanistan, Iraq, Syria, Yemen, Jordan, Niger, Somalia and Thailand.

“They should instead spend their time developing plans for a controlled transition. That does not mean indefinite special forces operations, or privatizing the wars using military contractors,” he said.

Via Twitter on Tuesday, Ocasio-Cortez said she agrees with more limited engagement, and that invading countries such as Afghanistan was a mistake.

“All of Congress was wrong, including both GOP & Dem Party, and led my generation into a disastrous wrong war that virtually all would come to regret,” she said in response to questions from CNN's Jake Tapper.

“I think that our decision to enter unlimited engagement in Afghanistan, particularly through the [Authorization for the Use of Military Force] + Congress' abdication of power + decision-making w/ passage of the AUMF, was a mistake. Other options: targeting the network itself, limited engagement, non-intervention,” Ocasio-Cortez wrote.

The AUMF, passed in 2001, gives the president authority “to use all necessary and appropriate force against those nations, organizations, or persons he determines planned, authorized, committed, or aided the terrorist attacks that occurred on Sept. 11, 2001, or harbored such organizations or persons,” according to the law.

Lawmakers have attempted repeatedly to modernize and replace the 2001 war authorization.

After sponsoring Common Defense's pledge, Warren said in a press release that it's time Congress resumes negotiations to approve the proper authorities before America gets involved in other conflicts going forward.

“We can keep America safe and secure without letting an imperial presidency stretch the Constitution beyond recognition to justify endless wars while Congress takes a backseat,” she wrote. “It's time to seriously review the country's military commitments overseas, and that includes bringing U.S. troops home.”

SEE ALSO: Sen. Rand Paul wants to end the war in Afghanistan with a 'victory bonus' for all GWOT vets