Dempsey: Academia Can Lead The Way In Fixing The Military Transition

Assign class credit to Gen. Martin Dempsey, chairman of the Joint Chiefs of Staff, for airing the idea that universities,... 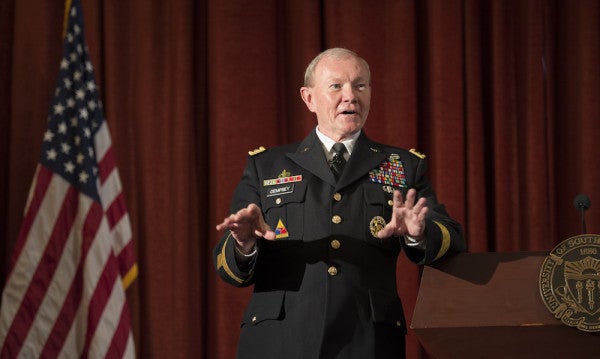 Assign class credit to Gen. Martin Dempsey, chairman of the Joint Chiefs of Staff, for airing the idea that universities, in partnership with the private sector, can take a leading role in easing the transition of veterans re-entering civilian society on return from more than a dozen years of war.

On Monday, Mar. 23, he visited the University of Southern California where 1,100 veterans, mostly from the post-9/11 wars, are securing their education on the G.I. Bill. Dempsey visited USC’s Center for Innovation and Research on Veterans and Military Families, overseen by Anthony Hassan, a Ph.D. researcher and Air Force major who served as a military psychologist with mental health teams in Iraq.

“When I return to where I do my work, I will be telling Secretary of Defense [Ashton] Carter, and VA Secretary [Robert] McDonald what you are doing here,” Dempsey told Hassan.

About 200 students and alumni, joined by USC President C.L. Max Nikias and Los Angeles Mayor Eric Garcetti, gathered in the Town and Gown Ballroom, many of the students from USC’s School of Social Work.

USC’s focus on advancing the science of clinical social work that helps active-duty military and veterans and their families with issues ranging from readjustment and transition to serious mental health issues related to military service is “unique, the first, and the best,” Nikias said.

Nikias shared with Dempsey that USC was one of only two schools that never severed ties with its Reserve Officers' Training Corps program, the other university being Notre Dame.

“I guess I’m a Trojan now,” Dempsey quipped, which would add another school to his biography that includes West Point, Duke, the Command and Staff General College, and the Army War College.

What America’s highest-ranking military officer offered to the emerging cohort of military-oriented social workers is that universities are well situated to partner with the public and private sectors in helping veterans return to civilian society.

Garcetti, a lieutenant in the Navy Reserve with an intelligence posting, offered that the work that USC, his alma mater, is doing is “telling us things about veterans that we did not know.”

USC’s Center for Innovation and Research on Veterans and Military Families has spearheaded the Los Angeles Veterans Collaborative, an umbrella of dozens of nonprofit organizations and government agencies working on issues ranging from dropping the numbers of homeless veterans in America’s second-largest city, to initiating meaningful job programs.

Members of the LA Veterans Collaborative meet monthly to brainstorm on gaps in service or needed policy changes they identify through the collaborative’s working groups. Each working group is focused on a particular issue area regarding veterans, such as mental health or homelessness.

“Because of the extraordinary work of Anthony Hassan and CIR, we know now that 80% of veterans leave service without having a job lined up,” Garcetti said.

Citing a Los Angeles effort to see 10,000 veterans hired by 2017, the mayor added, “It is not enough for a veteran to have a job.” Noting that the USC research indicated 22% of veterans in the research are earning at poverty level, or below, “We have to make the American dream possible for them.”

Dempsey has led troops at all levels, from platoon, to combat command in Baghdad, to global command. But he considers himself a product of education in the humanities, and a poet and scholar, as well as a soldier.

Sharing the reason for his visit, Dempsey said, “We wanted to come to a place where the private sector, and the public sector, and academia partnered to deliver services, and tap into the incredible potential of our veterans.”

Veterans with burn injuries, brain injuries and amputations “will need long-term help for the rest of their lives,” Dempsey expressed.

Most veterans, he said, “are not looking for a handout. They just want a handshake.” He added, “They are resilient,” and helped once, become “the leaders we are going to need.”

WATCH: Gen. Martin Dempsey, tell civic leaders to support returning veterans as they integrate back into their communities at the National League of Cities Conference in 2013.

Universities, Dempsey reasoned, offer fertile ground to serve as idea incubators, and a potentially effective neutral broker to bring in nonprofits and public sector partners without imposing an ideological, or political, agenda.

Blas Villalobos, a Marine infantryman from the Iraq War, who completed his master’s in social work through the USC military program, asked if a triad of university private-public partnerships should be exported nationally as an organizing model.

Academia, Dempsey said, as an organizing agent for community-based efforts at getting services to veterans and helping them with transition, “is great, because it is non-threatening.”

For time to come, Dempsey said, active-duty transition to veteran status is critical. Deployments, whether combat, stabilization, or humanitarian, are going to be the military’s focus for time to come.

If 80% of American men and women join the all-volunteer military, but do not make it a career, preparing their transition back to civil society “will have to begin at inception … not wait until they have six weeks left in service,” Dempsey said.