Dennis Rodman, the former basketball star and citizen diplomat, wants to meet with President Donald Trump to discuss ways to... 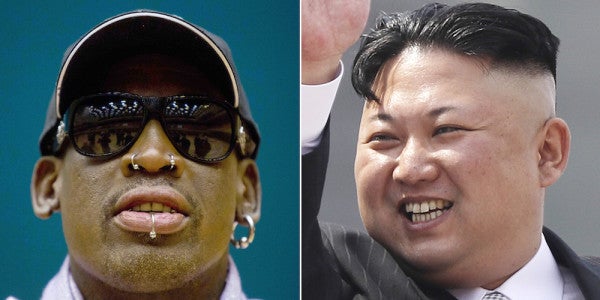 Dennis Rodman, the former basketball star and citizen diplomat, wants to meet with President Donald Trump to discuss ways to de-escalate tensions between North Korea and the U.S..

In an interview with The Guardian, Rodman said he believes that he can be the mediator between Trump and North Korean leader Kim Jong Un and that he is willing to go to North Korea to negotiate.

“I've been trying to tell Donald since day one: 'Come talk to me, man … I’ll tell you what the Marshal wants more than anything … It's not even that much,'” Rodman said. “If I can go back over there … you'll see me talking to him, and sitting down and having dinner, a glass of wine, laughing and doing my thing.”

“I guess things will settle down a bit and everybody can rest at ease,” Rodman said.

In the photo, Rodman is wearing a shirt that shows him in between Trump and Kim, along with U.S. and North Korean flags and the word “Unite” written under them.

Rodman told The Guardian that he tried to make his sixth trip to North Korea, but U.S. officials told him not to go. “Basically they said it's not a good time right now,” he said.

The Department of State has issued a travel ban against Americans visiting North Korea in September, after Otto Warmbier's death.

When asked about what Kim wanted, Rodman replied “I ain't telling you … I will tell [Trump] when I see him.”

The Guardian notes that while the White House has not responded to Rodman's request, Trump did praise the athlete's visit to North Korea, calling it “smart.”

“The world is blowing up around us,” Trump said. “Maybe Dennis is a lot better than what we have.”