For nearly a decade, Carlos Jaime Torres dreamed of being allowed to return to the United States, the place he... 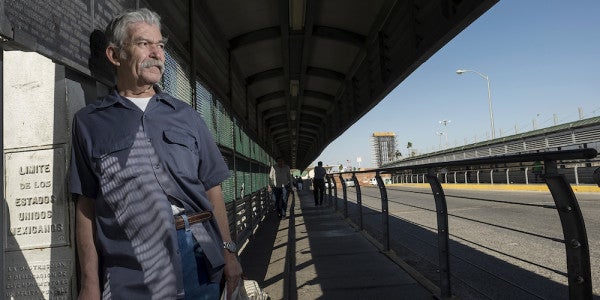 For nearly a decade, Carlos Jaime Torres dreamed of being allowed to return to the United States, the place he called home since he was an infant and the nation he served for four years during the Vietnam War.

Since his 2010 deportation following a conviction on marijuana possession and delivery charges, Torres had lived in a small concrete home in one of the poorest neighborhoods in the border city of Reynosa, across the Rio Grande from McAllen. His cramped bedroom was decorated with photos from his time in the U.S. Army, at Fort Bragg in North Carolina, and a large black POW/MIA flag. He scraped by as a security guard, called his mother every morning at 8:30 and tried to avoid the violence that often erupted in the troubled city.

“I look American. I act American. I dress American. I am an American,” he said in a 2016 interview. “The hardest part is being told you're not wanted.”

Torres, who died Saturday, returned to the United States this week, to be buried Thursday in the Rio Grande Valley State Veterans Cemetery in Mission. He was 64.

“He's finally coming home,” said his sister, Norma Torres Treviño. “It's not how we wanted, but he'll be home.”

In this photo taken Feb. 23, 2016, a photograph of Amry veteran Carlos Torres holding a machine gun during his military service is displayed in Reynosa, Mexico, along with his honorable discharge paperwork

Torres was one of hundreds of veterans deported after criminal convictions, many of whom had arrived in the United States as children and were legal residents when they served in the U.S. military, but never completed the citizenship process.

Although immigration officials say they weigh an immigrant's veteran status when deciding whether to push for deportation, in reality, veterans convicted of what immigration law defines as an aggravated felony — a confusing, sometimes contradictory set of offenses — face almost certain deportation, experts say.

A number of Congressional efforts aimed at giving deported veterans a chance to return to the United States have failed in recent years, victims of the current political gridlock over immigration.

U.S. Rep. Vicente Gonzalez, a McAllen Democrat who has filed legislation to help deported veterans, said he hopes Torres' death serves as an “eye opener to all.”

“Carlos Torres served this country, and in return, this country failed him,” he said. “He fought for a home that turned him away, and in the end, he never saw that home again. There is no excuse for this. No military service member should die in vain. We have failed these people during their lifetime, and now in death.”

Gonzalez said he is increasingly optimistic about legislation he authored last year with Republican Don Young of Alaska and El Paso Democrat Beto O'Rourke. The Repatriate Our Patriots Act, which would protect from deportation veterans with an honorable discharge who commit certain non-violent crimes, will “finally get the hearing we have been requesting for close to two years” when a Democrat-controlled House of Representatives takes power next year, Gonzalez said. But to be successful, the legislation will need bipartisan support, a tall hurdle amid the ultra-polarized debate over immigration.

Hopes among deported veterans and their supporters were high last year after Gonzalez had dinner with President Donald Trump, whom Gonzalez said appeared sympathetic to the idea of limiting deportations of veterans. But Trump has since given the issue little attention.

According to the American Civil Liberties Union, at least 240 veterans have been deported to three dozen countries around the world in recent years. Experts say deportations of veterans began accelerating with the Obama administration's aggressive push to oust immigrants with criminal backgrounds as part of a failed strategy to broker an agreement on comprehensive immigration reform in Congress.

In 2016, there were nearly 100,000 noncitizen veterans, according to the Migration Policy Institute. An American-Statesman investigation that year found numerous deported veterans living in the hardscrabble cities of the Texas-Mexico border.

In this photo taken Feb. 23, 2016, U.S. Army veteran Carlos Torres, 61, a poses on Hidalgo-McAllen International Bridge near the dividing line between the United States and Mexico. Forty-four years after he volunteered for the U.S. Army during the Vietnam War, Torres was among an untold number of U.S. military veterans who’ve been deported to Mexico over the past decade after arrests or prison sentences.

Torres, who was among the veterans profiled, had left Mexico when he was an infant and grew up in Texas and California. At 18, as a permanent legal resident but not a citizen, he volunteered for the Army toward the end of the Vietnam War and served four years, until his honorable discharge in 1976. Though he hoped to go to war, his unit never deployed.

In 1994, he went to state prison on marijuana charges and was deported after a four-year term. He returned to the U.S. illegally a couple of times, he said, to see children and his ailing mother, and in 2010 he was deported again to Mexico.

Despite his deportation, four of his sons volunteered for military service, serving a combined 11 tours in Iraq or Afghanistan.

Those who knew him say Torres was turning his life around after years of poverty and struggle in Reynosa. He had recently gotten involved in the growing movement to support deported veterans and was planning to be active in the opening of a “bunker” in the Mexican state of Tamaulipas to aid vets living south of the border. He had also recently applied for Department of Veteran Affairs pension and disability benefits, which deported veterans remain eligible for, along with burial benefits.

And Torres had recently gotten a new job providing security for a Reynosa attorney, which allowed him to leave his work as a security guard at a factory, where he earned less than $1 an hour. The new job brought better pay and benefits, according to his sister. On the evening of Dec. 8, Torres sent an excited text message to friends and family: “Going to the Company Christmas Party! Haven't been to one of these in 35 years minimum!”

Hours later, Torres collapsed at the party, in what his family believes was a heart attack. “He didn't suffer and he wasn't alone,” Treviño said. “If he hadn't gone to that dinner, he would have been alone in his house.”

Hector Barajas, who founded the Deported Veterans Support House in Tijuana and had befriended Torres, was helping him with his VA claims around the time of his death. Funerals of deported veterans at VA cemeteries, which often feature flag ceremonies and other military honors, are bittersweet, he said.

“It's as if their service is finally being acknowledged,” he said. “There is no honor in deporting a veteran.”