A U.S. Army National Guardsman convicted of murder in the 2010 fatal shooting of an Afghan man was released Monday morning from a military prison at Fort Leavenworth 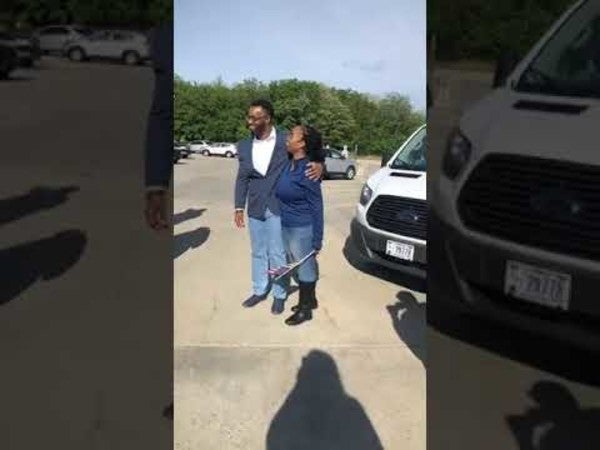 A U.S. Army National Guardsman convicted of murder in the 2010 fatal shooting of an Afghan man was released Monday morning from a military prison at Fort Leavenworth.

As a white van carried Sgt. Derrick Miller to a parking lot at the U.S. Disciplinary Barracks, the guardsman’s mother, Renee Myers, held an American flag and excitedly said: “Ah, my baby.”

“Hey, mom,” Miller said as he stepped out of the van after eight years in military prison. He rubbed her back as the two embraced.

Miller has been in prison since July 2011 when he was convicted at age 27 of premeditated murder in the death of the civilian, who the military has identified as Atta Mohammed, in eastern Afghanistan.

A native of Frederick, Maryland, Miller was sentenced to life in prison after he was found guilty in Fort Campbell, Kentucky. His term was reduced to 20 years after a hearing in April 2018, according to United American Patriots, a group that works to get clemency granted for troops who say have been wrongfully convicted of war crimes.

Miller was granted parole earlier this year. His Dallas-based attorney, Colby Vokey, is hoping to get him pardoned.At Miller’s trial, prosecutors argued Miller took a gun from another soldier, stood over the Afghan man as he was lying down and shot him in the head, the Associated Press reported at the time. Miller has maintained he shot the man in self-defense.

As supporters waited for Miller’s arrival, Vokey said the man Miller shot made inconsistent statements as he walked through a defensive perimeter. Miller perceived him as a threat to his unit.

Thinking the man was scouting out the unit for the Taliban, Miller questioned him with an interpreter, Vokey said. The man then reached for Miller’s gun and Miller shot him during a struggle, his attorney said.

Less than an hour later, the unit was attacked, according to Vokey. Because of the shooting, a platoon sergeant said at one of Miller’s hearings, the unit thought the attack was imminent and heightened its security. The sergeant credited Miller’s questioning of the man to saving the lives of American soldiers, his attorney said.

The shooting occurred during Miller’s third deployment, something he volunteered for, his attorney said.

Back in Maryland, Miller will reunite with his two daughters aged 12 and 10. His mother said she planned to cook him a lasagna dinner.

As for Miller, he hopes the military examines its rules of engagement, which he said allows “Monday morning quarterbacks” to cripple fighters.

“This can happen to anybody,” he said.

Leaving Fort Leavenworth, the group planned to go to an IHOP for pancakes.