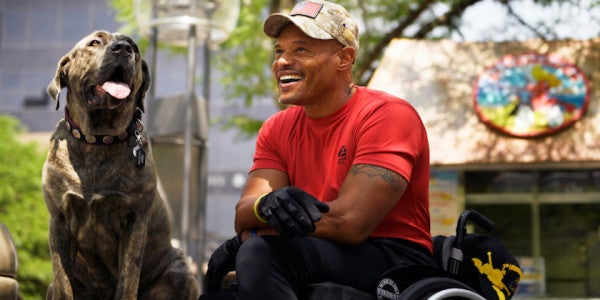 Anthony Drees vividly recalls the 1991 Iraqi missile attack on U.S. military barracks in Saudi Arabia that claimed the lives of more than two dozen fellow service members — an event that would also put his on a new course.

“I hear it more than I feel it — suddenly I’m looking up and I can see the sky,” said Drees, a U.S. Army veteran who moved to Colorado in 1993 after serving in Operation Desert Storm. “The walls I was next to are gone, the roof is gone. There are sounds of people screaming, the smell of people burning. I tried to move my leg and tried to put my shoe on, and it flopped in a direction it doesn’t usually go.”

The former soldier would undergo 74 surgeries in the next 27 years, most of them attempts to save his shattered right leg. Along the way, Drees also made room to focus on the needs of other veterans and eventually took the reins of a nonprofit that helps other groups provide things like service dog training, support for the children of fallen service members and assistance for veterans trying to re-enter civilian life.

“I’m on a mission, and I know what I’m doing,” said Drees, wearing a Desert Storm/Iraqi Freedom ballcap. “None of these things are a sprint, they are a marathon.”

An injury comes back to haunt

Part of that long view for Drees, 50, involves his 27-year-old war injury, which because of a bone infection and a tumor that wrapped around his femur required the amputation of his right leg in February.

While Drees now uses a wheelchair, he comes across as otherwise undeterred. On a recent morning, he had a Denver Post reporter scrambling to keep up with him during an interview as his 125-pound Italian mastiff service dog, Diva, pulled him along Court Place in downtown Denver.

When asked how he feels about his physical challenges, he jokes he’s 20 pounds lighter after the amputation and says he’d rather focus on building his organization in order to help other veterans.

“We’re pounding the pavement and I’m shamelessly smiling and dialing and kissing babies,” he said. “This is veterans helping veterans.”

And as the executive director of Veteran’s Passport to Hope, he helps raise money that gets distributed to other veteran-related nonprofits across Colorado through grants. Drees’ organization raised $100,000 last year for 19 nonprofits — but he’s aiming for $150,000 this year and aspires to reach $1 million in annual disbursements five years from now.

From rough childhood to Desert Storm

That optimism stands in stark contrast to the formative years of his life. Growing up in North Dakota, Drees was abandoned by his mother when he was 13 and pushed into the foster care system. As one of just a few African-Americans living in Grand Forks, N.D., in the 1980s, Drees struggled to find his place.

He became a troublemaker, he admits, doing a 90-day stint in juvenile lockup. He got into the University of North Dakota but then dropped out. His next stop was four years with the U.S. Army, after which he went on inactive reserve for two years.

And then Iraq invaded Kuwait.

He arrived in Saudi Arabia about a month later, tasked with driving blacked-out tanker trucks to supply fuel for Abrams tanks on the front line.

Days later, on Feb. 25, 1991, at 8:30 p.m., sirens indicating an incoming Scud missile sounded and sent Drees and his fellow soldiers scrambling for protective equipment. Drees was reaching for his helmet between two cots when the projectile struck.

His left leg was broken, and his right leg was pulverized, with huge chunks of skin blown from the back of both legs.

“It’s a big gaping hole; it’s like a shark bite to me,” Drees said, showing photos on his phone of a yawning gap in his right leg.

Military doctors wanted to amputate, but Drees refused to let them, convinced it could be saved. He underwent 58 surgeries in the first year or so after the attack and then began physical therapy at what is now the Walter Reed National Military Medical Center.

Drees’ fortitude prevailed, as he slowly got back the use of both legs. After moving to Colorado, he began a career in auto sales, using his gregarious personality and smooth-talking style to convince customers that a luxury car was in their future.

“I’ve never met anybody with as much tenacity as Tony,” said Amy Meyer Smith, who with her husband co-owns Infiniti of Denver, and has known Drees for 16 years. “He’s been knocked down so many times and he keeps getting back up.”

That dealership has been one of the biggest donors to Veteran’s Passport to Hope, which was founded in 2012 by Army veteran Shane Schmutz.

Patrick Wieland, board president for the nonprofit Drees now leads, first saw him at a fundraiser the organization held in Littleton in 2016. Drees, who now does motivational speaking, gave an inspirational talk at the event and within a year was tapped as executive director. He was largely sidelined from his new job while he dealt with increasing medical issues, culminating in the amputation at Brooke Army Medical Center in San Antonio four months ago.

A telling note about Drees’ character, Wieland said, involves how he navigates the timing of the life-changing missile attack, which happened less than 72 hours before President George H.W. Bush suspended hostilities.

Put another way, that’s less than three days before the end of the six-week war.

“There’s demons under there he fights every day — that’s the hero,” said Wieland. “He kind of gets a hold of you, and you kind of want to get fired up by him. He’s a bit intoxicating.”