The graffiti may be gone, but the question of whether ‘black vets count’ remains

"We cannot answer with empty words and think of ourselves as patriots. Instead, we must fight to undo the racist policies and cultural norms that have been telling African-American veterans that they don’t count for far too long" 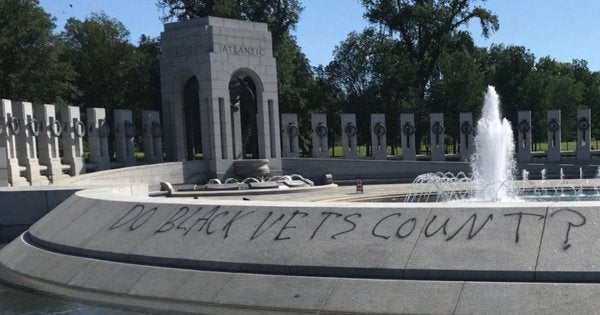 One of America's most recognizable monuments, the World War II Memorial, was vandalized with spray paint last week amid nationwide protests against police brutality sparked by the death of George Floyd at the hands of a Minneapolis police officer. This was answered with righteous condemnation by veterans and the organizations that represent them, but some of the outrage rings hollow. The question that was scrawled across that sacred stone — “DO BLACK VETS COUNT?”— has largely been ignored and forgotten as quickly and as easily as it was physically washed away.

The reflexive answer to the question of whether African-American veterans “count” — as veterans, as citizens, and as people — is undoubtedly “yes,” but this rhetoric does not reflect our nation’s multi-generational failure to support these veterans and their families.

Like other African-Americans, even those African-American veterans who utilize the Department of Veterans Affairs (VA) healthcare system see worse medical outcomes and shorter lifespans than their white peers.

A comprehensive 2007 review of studies on the subject of racial disparities in VA healthcare found that black veterans are less likely to get curative cancer surgeries and necessary cardiovascular surgeries, and are less likely to successfully control chronic conditions. They also found that African-American veterans had a 40% higher risk of having an extremity amputation as a result of unmitigated diabetes. Among HIV patients at the VA, African-American veterans were diagnosed later and with more advanced illnesses and greatly reducing survival rates. And despite similar levels of severity of illness among veterans with PTSD, African-American veterans were far less likely than their white peers to be granted the a service-connected rating by the VA that compensates them for that disability.

Causes for such disparities reflected familiar trends, such as a lack of trust between black patients and their doctors, and that “clinicians’ diagnostic and therapeutic decision making varies by veteran race,” according to the review. Although the VA established an Office of Health Equity in 2012 to address these problems, a study released by the Government Accountability Office late last year found that this office failed to establish an action plan or clear lines of accountability, so it’s still unknown how or if VA has improved outcomes for African-American veterans at all.

These health gaps for African-American veterans follow a long history of disparate treatment both before and after they take off our nation’s military uniforms. While in service, African-American service members more frequently face non-judicial punishments, and receive punishments that are more severe than those for their white colleagues. Institutional racism within the military doesn’t just prevent African-American service members from earning promotions and serving in top roles; they’re also more likely than their white peers to be kicked out of the military at a complete loss of VA benefits, and even lose their legal recognition as veterans.

The American military was desegregated 75 years ago, and the women and men that the spray-painted monument was built for came home to a grateful nation and the first GI Bill of Rights. With the capital that was accumulated by WWII veterans thanks to VA-backed mortgages and free education, the American middle class was born and we became the world’s first superpower. Many of those veterans went on to make history — walking on the moon, starting Fortune 500 companies, becoming senators and even presidents.

But while their white counterparts prospered, African-American WWII veterans faced redlining, were routinely denied VA benefits, and had education counselors push them into less lucrative and more physically demanding careers, as well as under-resourced schools. While their white peers achieved positions of power and accumulated wealth, African-American veterans remained held back by institutional racism that today’s protests are now actively fighting against. That racism denied their progeny from the wealth, health, and security that many descendants of their white peers so freely enjoy today.

The spray paint on the WWII monument is already gone, but the question must remain. We cannot answer with empty words and think of ourselves as patriots. Instead, we must fight to undo the racist policies and cultural norms that have been telling African-American veterans that they don’t count for far too long.