Looking back to when he began making his film one year ago, documentarian Ric Burns admits he really didn't know... 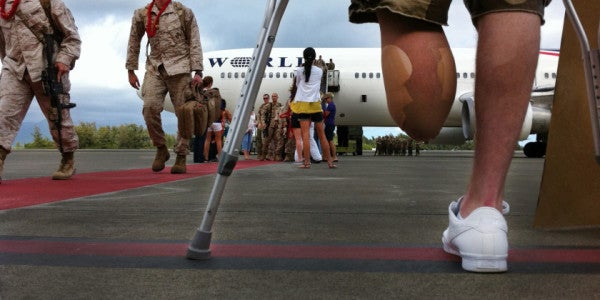 Looking back to when he began making his film one year ago, documentarian Ric Burns admits he really didn't know much about the military experience.

Kandahar is pretty far away from the Upper West Side of Manhattan, where he resides.

But after a year of talking to disabled veterans like Tammy Duckworth or Max Cleland, Burns learned about the gap between the civilians and service members, and that it can be bridged if civilians are willing to do more to understand and contribute.

The result is a film that is a fascinating exploration of the way America has treated its disabled veterans throughout history.

Burns named his film “Debt of Honor,” after George Washington’s 1783 farewell speech to the Army in which he said,

… I cannot omit to mention the obligations this country is under, to that meritorious Class of veteran … nothing could be a more melancholy and distressing sight than to behold those who have shed their blood or lost their limbs in the service of their country … it is therefore more than a common debt, it is a debt of honor.

Burns told me the question for today’s society is how a democracy pays the debt it owes the people it sent to war, and who is responsible for it.

The film moves through America’s wars, tracing the increasing ability of medical technology to save wounded warriors and the persistent inability of the American people to treat them well when they get home.

One of the themes of “Debt of Honor” is how the growing disconnect between those fighting and dying in the nation's wars and the civilian population back home means the debt Washington talked about can sometimes be invisible for the majority of America.

“We live in a country where 99% of people is in the civilian population, only 1% is in the military, and it's been that way for decades,” Burns said, before a recent screening of his film.

“Ever since the Vietnam War made the draft unthinkable, we have an all-volunteer army, and that means 99% of America doesn't have any skin in the game,” Burns said.

The recent wars in Iraq and Afghanistan have been sheltered from the U.S. public. As defense expert Jim Fallows notes, the three-quarters of those born before 1950 had a family member in uniform. Of those born since 1980, only one in three were related to anyone with military experience.

“You begin to live in a pleasant but toxic illusion of going like, ‘that's just not my scene,’” Burns said. “It is a toxic invidious division at the heart of the republic when people can no longer relate to the meaning of that struggle.”

Burns got these ideas from talking to veterans like Cleland, who lost three limbs in combat in Vietnam and later became a U.S. senator and administrator for the Department of Veterans Affairs.

“My fear is that you've had a growing disconnect between the American military and American society,” Cleland says in the film. “Young people now are not threatened with the draft; therefore, they're not going out and burning draft cards when they're pissed off about Iraq or Afghanistan. That's somebody else's fight. They're like cheerleaders in a big big game. They're all for their team, ‘Go team! But I'm not sending my son to play on the field.’”

The solution, Burns said, is getting back to the idea that people have an obligation to their country. Burns grew up as a child of the 1960s and seemed apologetic for the way his generation turned on the military. Ever since then, the notion of civic responsibility, he said, has been transferred from something for everyone to a task for a few volunteers.

Civilians, Burns said, must take a greater role in bridging the divide. “If you're not going to serve directly, you have to, at the very minimum, serve those people who do,” he said.

Veterans like Cleland and Duckworth, who lost both of her limbs in Iraq, have stories that Burns said he wants Americans to hear about. If American civilians could talk and think about their veterans in a way that is less abstract, perhaps then they’ll learn how to support them productively.

“I think the deepest question for me, in 2015, is how can all Americans come back to a status quo where we all have to serve our country?” Burns said. “”It's not just all on them — we can't delegate it to them.”

He mused that perhaps a civil service option, in which young people who don’t want to join the military would volunteer or do humanitarian work for two years, could do the trick.

Regardless, he senses that perhaps times are changing. There is a lot of media and literature telling soldier’s stories now, and his is one of them.

“I can feel something, something's changing,” Burns said, “and I think it's going to lead back to a culture of service.”