New details have emerged about why a Navy Seals convoy flew a campaign flag for President Donald Trump on a... 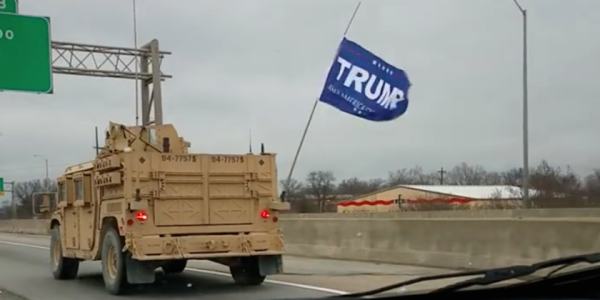 New details have emerged about why a Navy Seals convoy flew a campaign flag for President Donald Trump on a Kentucky highway in late January, according to documents obtained by the Herald-Leader.

The blue Trump flag, affixed “to a rear [Humvee] antenna with zip ties,” was flown on a convoy of 11 vehicles containing 12 Navy personnel, said the Department of the Navy inquiry obtained using the Freedom of Information Act (FOIA). The names of the individuals were redacted in the report because disclosure would endanger the lives or safety of personnel, the Navy said.

The flag was attached by a Navy Seal who, according to an interview the Department of the Navy conducted with him on Feb. 3, “made the decision to place the flag on the Humvee without discussing it with anyone in the convoy.”

“He placed it on the Humvee on Friday before departing,” the documents stated. “He did not know who owned the flag because he has bought many campaign flags for the members of his Troop. He was unaware of any regulations that flying the campaign flag would have violated. [The man who attached the flag] drove home for the weekend and was not with the convoy while it transited.”

The Navy Seals group was traveling from Ft. Knox to Muscatatuck Urban Training Center (MUTC) in Butlerville, Ind., roughly 110 miles away, the documents stated. The convoy commander, unnamed in the report, traveled with the convoy on Jan. 29 at 11 a.m. This commander was responsible for inspecting all the vehicles prior to departure and was aware the flag was on the vehicle.

“[The convoy commander] was also aware of the rules precluding Department of Defense (DoD) endorsement of political candidates during an election,” the documents stated. “However, he believed that flying the flag was not inappropriate since the election was over and since the candidate was now the Commander in Chief of the Armed Forces.”

This thinking violated a long-standing DoD policy to avoid any activity that might imply DoD endorsement of a political campaign, the documents stated.

About 30 minutes into the drive on I-65, the convoy commander noticed that the flag was getting a good deal of attention from civilian drivers, “some of which was negative attention.”

“At this point, he felt like the correct course of action would have been to take the flag down,” the documents stated. “However, he was concerned that it would be unsafe for the convoy and its members to pull over while on the highway.”

The preliminary inquiry officer disputed the convoy’s safety concerns, adding that “there would have been multiple opportunities to safely exit I-65 to a rest stop or gas station and remove the flag.”

The convoy decided to wait until they reached their destination before taking down the flag.

“This episode served to cast a bright and unwanted spotlight on our actions and location,” the preliminary inquiry officer said.

At least two videos of the flag garnered significant local and national attention, particularly from ABC, CBS, and Fox News. The Department of Defense (DoD) initially told the Herald-Leader that the vehicles didn’t belong to an active military unit.

The Navy Seals formally punished the unit on Feb. 28 but none of the details were released, said Lt. Jacqui Maxwell of the Naval Special Warfare Group 2 in Virginia Beach, Va. According to the documents, the commanding Seals officer directed a teamwide remedial training on safe convoy operations and partisan political activity. That remedial training was completed by Feb. 9.

“It is my hope that this incident will serve as an reminder about how seemingly minor errors in judgment can have far reaching 2nd and 3rd order effects,” the commanding officer wrote in one of the documents, “which can in turn have major implications for our Command, Naval Special Warfare, and ultimately our reputation in the eyes of the country which we are sworn to protect.”