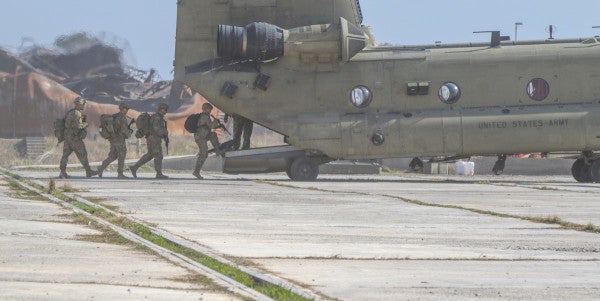 Amid additional announcements of Army troop deployments, the Pentagon on Wednesday released new details behind the recent surprise deployment of about 200 paratroopers from the 82nd Airborne Division to Iraq.

Two companies from the 82nd Airborne are being deployed from Fort Bragg in North Carolina to Mosul to provide additional advise-and-assist support at the request of the top American commander in Baghdad, according to a recent Fox News report.

There was no plan to announce the temporary deployment because it will likely last only 120 days and will not count against the authorized number of American troops in the country, Pahon said. The U.S. military is authorized to have about 5,000 U.S. service members in Iraq and about 500 in Syria.

Separately on Wednesday, the Army announced the deployment this summer of approximately 400 soldiers from the 1st Armored Division Headquarters, stationed at Fort Bliss, Texas, to Iraq in support of Operation Inherent Resolve, the mission against militants affiliated with the Islamic State of Iraq and Syria, or ISIS.

“We are proud to work alongside our Iraqi allies and coalition partners to continue the fight against ISIS,” he added. “I'm also extremely impressed by the commitment and sacrifice of our military families. It is their stalwart support and resilience that gives us the strength to serve.”

The Army also announced the deployment this spring of 1st Armored Division's Sustainment Brigade, stationed in Fort Bliss, to Afghanistan.

The “Muleskinner” Brigade will deploy approximately 200 soldiers from its headquarters and Special Troops Battalion as part of a regular rotation of forces to Operation Freedom's Sentinel in Afghanistan with the primary mission to provide sustainment and logistical support to units across the area of operations.

“We've built professional and resilient soldiers through a rigorous training schedule and resilient families within the Muleskinner Brigade. We are ready to answer the nation's call in Afghanistan or wherever else we are needed around the world.”