In the wake of a March 2014 review of the military’s decorations and awards system ordered by then-Defense Secretary Chuck... 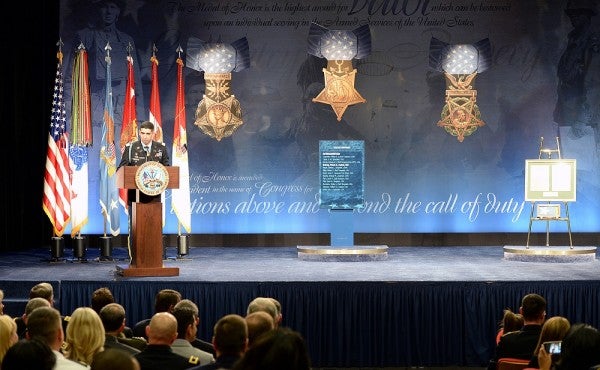 In the wake of a March 2014 review of the military’s decorations and awards system ordered by then-Defense Secretary Chuck Hagel, the Pentagon is set to review more than 1,100 awards for valor issued since Sept. 11, 2001, for possible upgrades to Medal of Honor awards.

An exclusive Jan. 6 USA Today article by Tom Vanden Brook notes that if it’s approved by current Defense Secretary Ash Carter, this review “would represent one of the most significant steps in decades to honor troops who have displayed extraordinary courage in combat.”

In an email to Task & Purpose, a spokesperson for the Pentagon said he had no additional information to add regarding the report and that the department was not involved in the sourcing for the story.

The most recent recipient of the Medal of Honor was Army Capt. Florent Groberg, who’s patrol was ambushed by two suicide bombers on Aug. 8, 2012, in Kunar province, Afghanistan. Groberg grabbed one bomber and pushed him away, onto the ground, triggering an explosion that severely wounded him, but saved several lives. Grober was awarded the Medal of Honor on Nov. 12, 2015.

According to documents obtained by USA Today, the review also recommended the following:

The review of valor awards for upgrades to the Medal of Honor was the only one of the review’s 37 recommendations that was not reached by consensus, reports USA Today. It would also require the Army, Air Force, Marine Corps, and Navy to review each of the Service Crosses and Silver Star nominations that’ve been awarded since 9/11.

To give some perspective, the Army alone has awarded 718 Silver Stars, wrote Vanden Brook, adding that the Navy and Marine Corps oppose such a review because it undermines the authority of a commander’s decision.

According to USA Today, a memo from Navy Secretary Ray Mabus noted that the review could “have long-term detrimental impact on our service culture and our awards program.”

Over the phone, Tom Kelley, president of the Congressional Medal of Honor Society and a recipient of the Medal of Honor, echoed this sentiment, saying that if troops are not being recognized for their actions, “for one reason or another” he sees no problem reviewing those cases, but drew the line at a blanket review, adding that “this is the process and the process works.”

UPDATE: Additional information from Tom Kelley was added to this article after publication. (1/6/16)