The Republican presidential nominee said he would build up military installations along the East Coast and restructure Veterans Affairs, which... 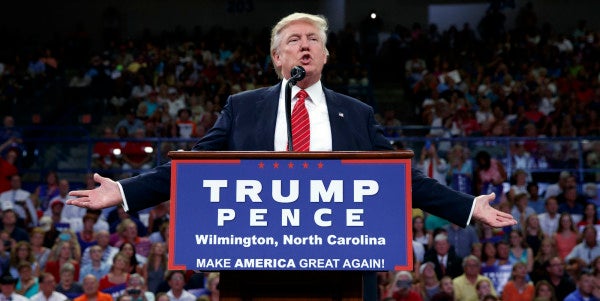 The Republican presidential nominee said he would build up military installations along the East Coast and restructure Veterans Affairs, which he called “corrupt in many ways.”

During a visit in Wilmington Tuesday, Donald Trump told The Daily News “vets are not treated properly” by the VA, which has been chastised for long waits and complex registration requirements.

Trump allowed about five press organizations, including The Daily News, to conduct one-on-one interviews at University of North Carolina Wilmington shortly before a rally in support of his presidential bid.

“We're going to make it absolutely something that people can be proud of,” Trump said of the embattled VA.

While a miles-long line of supporters waited outside Trask Auditorium, the 5,800 capacity was reached hours before Trump's 2 p.m. rally. Overall, 4,000 supporters were denied entry to a full house.

Trump told at least two supporters in the crowd, who said they loved him, that he shared the sentiment.

Before the rally, select members of the press gathered in a protected area swarming with Secret Service agents and other security officers. Trump entered another guarded room nearby, where each journalist had five minutes to pitch questions to a man whose campaign and GOP support has generated $74 million, according to a recent tally by The New York Times.

“Actually, I think it's disgraceful. Voting is an amazing privilege and we have to make sure that the right people are voting. Without voter ID, how do you do that?” Trump asked. “I think it's a very, very upsetting trend. Now, a lot of courts are ruling in the other direction. But in North Carolina, I think it's a very bad decision.”

Because of that decision, he hopes voting will be carried out “honestly,” he said.

“The Republicans are going to be out there watching closely,” Trump added.

A range of ages was represented at the rally, at which former New York City Mayor Rudy Giuliani and Gov. Pat McCrory also spoke.

Here are Trump's answers to questions posed to him by The Daily News:

What are your plans to address issues that have been raised regarding the VA?

We're going to take care of our veterans, big league. I think I'm leading in the polls by massive numbers with our veterans because they know I'm going to take care of the situation. The VA is a corrupt enterprise in many ways. You look at what is going in Arizona and so many other places. And over here, the vets are not treated properly. We're going to make it also something that people can be proud of and when they don't get the service, they're going to go to either a private doctor or a hospital right near where they are looking. Because people are waiting in line for six, seven days and they're dying, waiting in line.

Why can't veterans just have a form of insurance instead of the VA?

That's a very good question. As you know my plan is in DonaldJTrump.com and it's a plan the vets are loving. Basically, it's saying if you're not going to get service, you're going to go outside to a private doctor. We're going to pay for the doctor or to a hospital.

The military, since 1980 with some exceptions, has been downsizing. Are we ever going to return to efforts to build our military? If so, what is your plan to do so?

Do you have any plans for restructuring other veteran benefits?

Are there plans to bolster military installations on the East Coast?

Our area often faces challenges of financing beach renourishment. What are your thoughts on shoreline protection?

What are your thoughts on offshore drilling?

It depends. I think that's a local decision. It's fine if the people in the area approve it.

What are people telling you along the campaign trail?

Look at the crowd that we have. We are packed. You have thousands of people outside that weren't even able to get in. I think we're doing so well. It's been an amazing campaign.

With North Carolina considered a battleground state, what is your feeling about the recent ban on Voter ID requirements?

How will the absence of Voter ID requirements affect your election?

I hope it goes honestly. How do you know how something goes if you have no voter identification? The Republicans are going to be out there watching closely.