Trump Makes It Clear: He Owes The NRA Big Time, And He Plans To Pay It Back

In the first presidential speech to the National Rifle Association’s annual meeting in more than three decades, Donald Trump on... 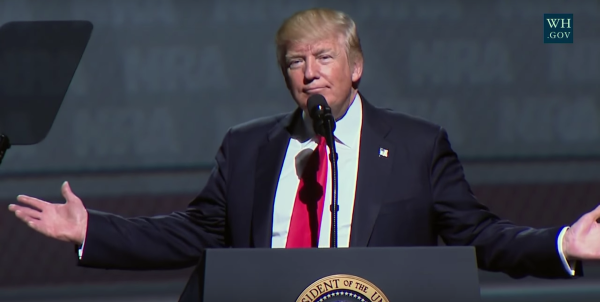 In the first presidential speech to the National Rifle Association’s annual meeting in more than three decades, Donald Trump on Friday pledged to repay gun owners for helping to propel him to his stunning rise to the White House.

“I am here to deliver you good news,” Trump said. “The eight-year assault on your Second Amendment freedoms has come to a crashing end.”

In a rousing 30-minute speech, the president promised to push policies and appoint federal officials who would help promote pro-gun policies and fight against those who want to ban private gun ownership.

Trump specifically mentioned a trio of leaders that the NRA supported: Supreme Court Justice Neil Gorsuch, Attorney General Jeff Sessions and Interior Secretary Ryan Zinke, who traveled with him to Atlanta to speak. Trump praised Zinke for canceling a ban on the use of lead ammunition on federal lands on his first day in office.

“Some of the most important decisions a president can make are appointments, and I’ve appointed people who believe in law, order and justice,” he said.

While he did not go into detail, his administration has already been quietly loosening firearms restrictions and has indicated it backs a pair of NRA-supported bills in Congress that would allow Americans to carry concealed firearms from state to state — bypassing a confusing patchwork of laws — and making it easier and cheaper to purchase silencers.

His son, Donald Trump Jr., an avid hunter, counts himself a huge fan of the silencer proposal, even pledging his father’s support in a video with the founder of the nation’s largest suppressor manufacturer, SilencerCo. The president mentioned that both his adult sons, Donald Trump Jr. and Eric Trump, are huge outdoorsmen. “Frankly, I think they love the outdoors more than they love by a long shot Fifth Avenue, but that’s OK,” he said.

Trump was speaking directly to a core constituency, some of the same white, working-class voters who led to his surprise victory over Democrat Hillary Clinton. While his approval ratings are low, his supporters are largely satisfied with his performance — insisting he has kept his grandiose promises, though many haven’t been fulfilled — but he has not managed to win over new supporters.

“You have a true friend and champion in the White House,” the president said. “No longer will federal agencies be coming after law-abiding gun owners. No longer will the government be trying to undermine your rights and your freedoms as Americans.”

The estimated 10,000 people gathered at the Georgia World Congress Center gave him a hero’s welcome, with passionate bouts of applause. One of the loudest cheers, though, was about his pledge to erect a wall on the southern U.S. border. “We will build the wall,” he said.

Trump spoke about the night of his election, a theme he has returned to repeatedly since November, and how political pundits had predicted he would lose.

“So they keep saying it, so people say, you know, I really like Trump. He loves the Second Amendment. He loves the NRA,” he said. “I love him, but let’s go to the movie because he can’t win, because they’re trying to suppress the vote.”

The NRA was a strong backer of Trump from the start, unlike most traditional conservative organizations, many of which were leery of the brash businessman-turned-reality-TV-host and political novice. It endorsed him earlier than it had other candidates in previous years and became one of his top donors, with $30 million in contributions and TV ads that targeted his opponent.

“Only one candidate in the general election came to speak to you, and that candidate is now the president of the United States, standing before you, again,” he said.

Trump is the first sitting president to speak at the event since Ronald Reagan in 1983. Other speakers include Florida Republican Gov. Rick Scott and Republican Sens. Ted Cruz of Texas and David Perdue of Georgia.