"We didn't want this to be swept under the rug." 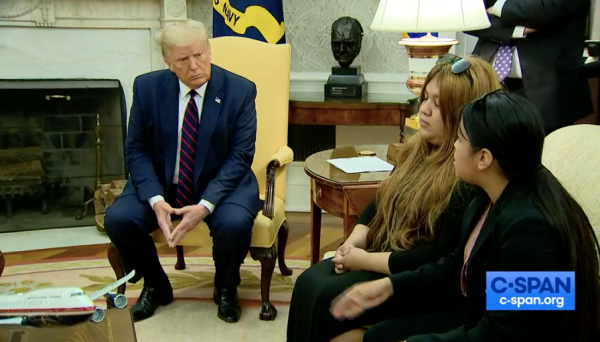 The Department of Justice is now involved with the alleged murder of Army Spc. Vanessa Guillén, President Donald Trump said on Thursday.

Guillén's family met with Trump at the White House to urge support for the “#IAmVanessaGuillen” bill, which was written by the family's attorney, Natalie Khawam.

According to local Fox News station KRIV the bill would “provide a 1-800 number outside of the military for military members to report and file sexual harassment claims.”

Guillén was allegedly murdered by another soldier at Fort Hood on April 22, the day she went missing. She was allegedly bludgeoned with a hammer, according to Khawam, and then “dismembered … with a machete.”

Trump said that the reports of Guillén's death “hit me very hard,” and that the FBI and DoJ were now involved in the investigation.

“We didn't want this to be swept under the rug,” Trump said before offering to help the family pay for the funeral, though Khawam said the military was taking care of it.

The DoJ did not immediately respond to request for comment.

On Thursday, the Army announced the five civilian experts who would be leading a panel review of Fort Hood's command climate and culture. The panel's findings will be provided to James McPherson, the Undersecretary of the Army, and Gen. Joseph Martin, the Army Vice Chief of Staff.

The two officials will then “consider every recommendation and implement changes, as appropriate,” the Army said.

Trump told Guillén's family on Thursday that he hoped “something very positive will come out in honor of your sister and your daughter,” who he called a “spectacular person.”

“You have our support,” he said.