Don’t Count The US Military Among Climate Change Skeptics

A bitter wind blew across Sewell’s Point in Norfolk, Virginia, on a recent afternoon as ocean waves crashed against a... 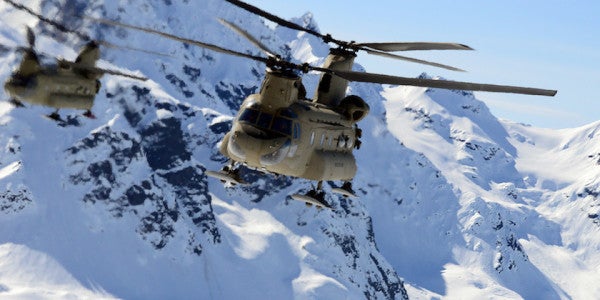 A bitter wind blew across Sewell’s Point in Norfolk, Virginia, on a recent afternoon as ocean waves crashed against a concrete pier where two black attack submarines were tied up for the day.

Pier 3 was taking the last hits of a severe storm that came shore a few days before. It flooded four buildings, tore up rooftops, knocked down trees and briefly cut electricity at the world’s largest naval station.

Storms obviously aren’t new here, but they are worse than ever — and the Pentagon blames climate change.

“We see the rising sea levels and flooding events,” said Capt. Dean VanderLey, who oversees Navy infrastructure in the mid-Atlantic region. “We have a responsibility to prepare for the future. We don’t have the luxury of just burying our heads in the sand.”

President-elect Donald Trump has described global warming as a hoax, and Republicans in Congress who reject science showing that greenhouse gases have warmed the planet have blocked funding to help the Pentagon assess the damage and plan for the future.

The House voted in June to bar the Defense Department from spending money to evaluate how climate change would affect military training, combat, weapons purchases and other needs.

“When we distract our military with a radical climate change agenda, we detract from their main purpose of defending America from enemies” like Islamic State, said Rep. Ken Buck, R-Colo., sponsor of the measure.

Partly as a result, the Pentagon says it does not keep figures on what climate change may mean for the military budget. Planners sometimes list upgrades to infrastructure as maintenance or repairs to avoid scrutiny from lawmakers.

But the debate is settled at the Pentagon. Rising sea levels and temperatures have forced it to rebuild or move roads, housing, airfields and other vulnerable facilities damaged by mudslides in Hawaii, floods in Virginia, drought in California and thawing permafrost in Alaska.

It also has led to a shift in strategic challenges around the world.

The Pentagon doesn’t say that climate change alone will cause wars. But the 2014 Quadrennial Defense Review, the Defense Department’s major planning plan for the next four years, calls it an “accelerant of instability” and a “threat multiplier.”

“The pressures caused by climate change will influence resource competition while placing additional burdens on economies, societies, and governance institutions around the world,” the document said.

In Africa, extended droughts have been a factor in several sub-Saharan and North African conflicts. When rising temperatures created food and water shortages, for example, increased poverty and migration created breeding grounds for terrorist groups in Mali, Nigeria and elsewhere.

Similarly, increasingly powerful typhoons spawned by warming oceans have battered U.S. allies in the western and central Pacific. Humanitarian aid operations, once a rarity, are expected to become a core Pentagon mission as the number of natural disasters has steadily increased.

Coastal flooding from a non-tropical low at the Outer Banks of North Carolina on October 5, 2015.North Carolina Department of Transportation.

In the Asia Pacific region, rising sea levels could inundate island nations such as Fiji and Micronesia, push saltwater into groundwater supplies and croplands in Vietnam and Indonesia, and threaten major cities, including Manila, Shanghai and Jakarta, Indonesia.

The Pentagon also expects to expand operations in the Arctic, the world’s fastest-warming region.

So much sea ice has melted that a northern shipping route over Russia and a northwest passage over Canada are now open to navigation and oil and gas exploitation for much of the year. Partly as a result, Russia is reopening Cold War-era military bases on its Arctic coastline.

The impact of global warming also is visible at some military bases in the United States.

The Pentagon’s “Climate Adaptation Roadmap,” issued in 2014, said the Hampton Roads area in Virginia, which includes Naval Station Norfolk and Langley Air Force Base, is a top concern.

The sea-level rise and land subsidence is causing increased tidal and storm flooding in the area. Saltwater intrusion already is a problem, with three rivers flowing into the Chesapeake Bay.

The low-lying region has recorded the fastest sea-level rise on the East Coast: 18 inches in the past century, according to the Navy.

By 2030, scientists project the sea to rise 6 more inches. The Navy expects the main road into the base to be underwater for two or three hours a day by 2040.

“It takes a while for people to get it,” he said at an Oct. 19 panel on Norfolk at the World Resources Institute in Washington. “It doesn’t go boom.”